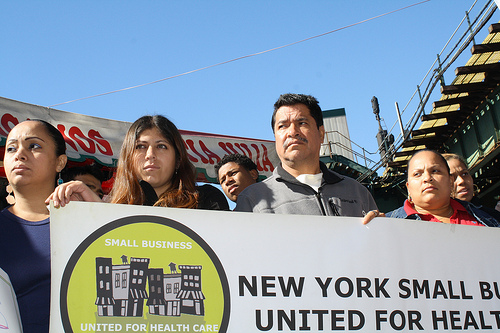 Maryuri Jimenez (far left), recently lost her job at a local clothing store for missing one day of work when her child was extremely sick. She was among dozens of community advocates and small business owners who attended today's rally in support of the New York City Council's Paid Sick Leave Bill, which would give nine paid sick days a year for businesses with 20 or more employees and five days for businesses with 19 or fewer employees. (Photo by: Amanda Plasencia)

Maryuri Jimenez lost her job at a local clothing store because she missed one day of work when her child was sick. Her boss felt it was not a good enough excuse, she said

“They didn’t care if my child was sick. They said work is work and fired me the same day,” Jimenez, 37 of Elmhurst Queens and a Colombian immigrant, said.

According to The Bureau of Labor, 37 percent of the lowest-income workers in the New York City area can’t take a single day off and get paid. Yesterday, Jimenez and others rallied to promote the passing of the New York City Paid Sick Leave Bill. The bill proposes nine paid sick days a year for businesses with 20 or more employees and five days for businesses with 19 or fewer employees.

Lining up in front of Tia Julia’s Antojitos Mexicanos taco truck at the corner of Roosevelt and Benham avenues in Queens, members of the community held posters in English and Spanish with clear messages, “My kids shouldn’t go to school sick” and “Small businesses support paid sick days.”

Make the Road New York, a local organization that promotes economic justice, equity and opportunity for all New Yorkers throughout the community, organized the rally. Their 7,000 plus members are primarily low–income Latino/a immigrants, 75 percent of whom are women.

“It is important to pass this bill because it will help reduce discrimination against low-income and immigrant workers,” said Noe Chametta, 40, who is originally from Mexico, but now lives in Queens. “Employers will always abuse the system against immigrants and take advantage of their situation and vulnerability.”

It’s been less than a week since Ruth Jara, a 49-year-old Ecuadorian immigrant living in Corona, Queens was fired from her restaurant job after missing one day of work to take her child to the doctor.

“They told me, if you don’t come back, you’re out of a job,” Jara said. This is the same restaurant that when she cut her hands on the job, her employer gave her a dirty rag as a bandage and told her to keep working.

According the Bureau of Labor, 85 percent of employees in the restaurant industry do not get paid sick days.

Jara witnessed an immigrant coworker break their head on the restaurant’s basement door. “The owner called the hospital to see how serious it was so he could determine whether or not he could pay her for the sick day,” Jara said. “I was surprised that she came back to work the next day and I told her that they needed to pay her for the lost day, but she was too scared and needed the money.”

“We’ve been told that this legislation will kill small business owners, but it’s the large and powerful corporations who are saying this,” said Andrew Friedman, co-director of Make the Road New York. “Small business owners believe that taking care of their workers and the health of their customers is good for business.”