Sierra Leone activists protests the rape and killing of a 5-year-old U.S. Citizen in Freetown 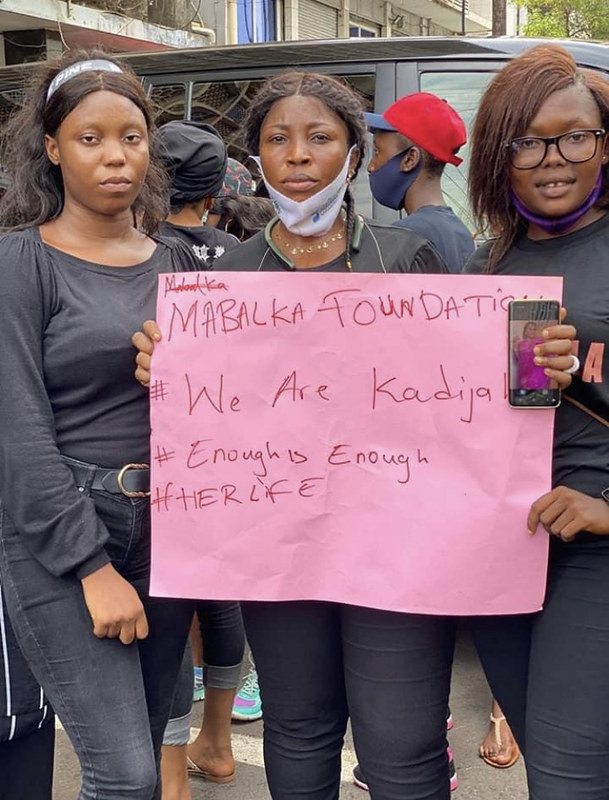 Hundreds of women activists took to the streets of Freetown on Monday to protest the rape and killing of a 5-year-old American citizen.

A postmortem examination in Freetown, Sierra Leone’s capital confirmed that Kadija Saccoh was raped and killed according to the country’s national broadcaster SLBC Television.

“I received a call that my daughter Kadija is dead and they were preparing her for burial. On suspicion, I was shocked, opposed to the rush burial and called for a postmortem examination,” Abu Bakarr Saccoh, the father of the victim, a Sierra Leonean based in the U.S., posted on his Facebook account. The postmortem result proved that the girl was repeatedly raped and killed.”

The death of Kadija has sparked protests across the country’s capital as activists are calling on the government to be clamp down on fighting rape against girls and women.

A report from the Family Support Unit, a police unit that handle rape cases said in a 2019 report  that, the small West African nation of 7.5  million people recorded over 3,260 cases of sexual penetration. Over 90 % of them were done by perpetrators known to  family members of the victims, the report said.

After the report was launched, President Julius Maada Bio declared rape as a national emergency. The sexual offenses  act was amended to 15 years in jail for perpetrators found guilty of raping an adult and life imprisonment for raping a minor.

The country’s First Lady Fatima Maada Bio who heads a campaign called  “Hands Off Our Girls” has vowed to ensure justice is done for the child.

“Rapists have no place in our society,” the First Lady said on Facebook Live. The little girl didn’t deserve to die like that. I will pursue justice for the kid and the family. That’s why I set up the ‘Hands Off Our Girls’ campaign to protect kids.”

Female in Sierra Leone, a coalition of women activists has condemned the act and has called for justice. In a street protest broadcast on Facebook they said the act is unacceptable.

“For the past three years, we have seen an unprecedented increase in the cases of rape,” said coalition  president Emma Fumi Turay to the protestors. “Most of these perpetrators have received less punishment while some have been protected by big guns in society. We will leave no stone unturned to acquire justice for the victim and her family”.

We are still on it until justice prevailed.
I say no to rape justice we want justice ⚖ peaceful demonstration. AMBASSADOR PRISCILLA ON THIS