Some small businesses in New York are focusing on waste reduction and zero waste events and lifestyles that they hope will lead to greater policy change in New York City. Many of these small companies were started during the pandemic, when waste in the city increased across the country.

“I was noticing all of this furniture being thrown away, and I had always noticed all the furniture on the street,” said Alyssa Kempinski, owner of Refuse Restoration NYC. “And I just started bringing it home with me.”

During the pandemic, cities across the United States noticed an increase of trash being thrown away, and New York was no exception. Currently, New York pays around $1.5 billion annually for their waste programs each year, or about $5000 per household. Kempinski believes that this money can go toward other initiatives that would encourage waste reduction.

“What if there were stores maybe owned by the city, thrift stores, something like that, where you could get furniture and home goods, all that kind of stuff,” said Kempinski. “Then it wouldn’t be going to the garbage, the city wouldn’t be paying for it to go to the garbage, and it would close that gap in regards to accessibility because there’s so many people in need of items, but they can’t afford it.”

“I found this mirror near Columbia University,” said Kempinski. “It was easily a prop mirror, the whole back was made of this fake Styrofoam and the frame was the only thing made of wood. But all it needed was a little bit of paint. And it was awesome, and it sold really quickly. That’s what I find with so many of these things, is that there’s so much potential, but people usually won’t give it the deep clean or the new paint job that it needs.”

Now, Kempinski has expanded Refuse Restoration to include commission based pieces, helping others refurbish and preserve their existing furniture, and consultations to help others start their refurbishing journeys. She has partnered with Remix Market NYC in Queens, which sells reclaimed and donated furniture in their store. If Remix has a furniture piece that has not sold for awhile, they give it to Kempinski to refurbish and sell it elsewhere.

While Kempinski only started doing this work since the start of the pandemic, she has always loved repairing furniture and learned about it when she was a little girl from her mother. Since then, she has expanded her skill set and applies what she learned to her company now.

“I started doing all this and selling items before I had all of the answers,” said Kempinski. “And I still definitely don’t have all the answers! But ultimately, it’s just problem solving.”

“The pandemic made a lot of people notice the excess amount of waste on the curb because there was such an influx it was impossible to ignore,” said Tarboton. “Unfortunately it was just an eye opener to something that actually happens all the time and hasn’t started or ended with the pandemic.”

Tarboton said after being unemployed because of the pandemic, she was trying to refurbish her home on a very tight budget. She started collecting furniture that she found on the street, but ended up not needing everything she collected.

“I grabbed some dining chairs that didn’t end up working for me and not knowing what to do with them, I threw them up for sale on Facebook Marketplace,” said Tarboton. “They sold that week for over $200 dollars. From then on I began grabbing items that sparked my interest and putting them up for sale. This grew into me starting to fix items, and eventually fully transforming them, getting a storage unit to store inventory and supplies, and later documenting the entire process on social media.”

As her passion for her new business grew, so did her mission to reduce waste in NYC. She says all of her repaired and resold items are rescued from the trash, and therefore they don’t go into landfills. She also wants to raise awareness about waste reduction through her social media, and hopes to encourage others to start their zero waste journeys.

“As a society we  keep producing and consuming new items when perfectly good items that already exist are being thrown away,” said Tarboton. “It just makes no sense, especially when so many people are struggling financially and aren’t able to access the type of things that others are trashing. It’s easy to get overwhelmed when thinking about waste, but if we all just try a little bit with small, manageable changes and an awareness that what we throw away matters, it can make a huge difference!”

Kempinski has always been passionate about zero waste and reducing waste. She said  since New York is a transient city for many people, she has noticed the large amount of waste produced by the city for the entire time she has lived here. While she hopes her company can help with waste reduction on a small scale, she thinks policy change and funding from the city toward programs that encourage less waste and more recycling and donating will make a real impact.

“The city is paying so much for our waste programs,” said Kempinski. “Wouldn’t it make sense for the city to subsidize some programs that connect the wastefulness to people in need?”

Once Kempinski became more established on Instagram, others with similar companies and missions started reaching out and connecting with her. Sandy Busken, owner of Dear Mess organizing company and Pop Up Swap X, met Kempinski through one of her clothing swap events. 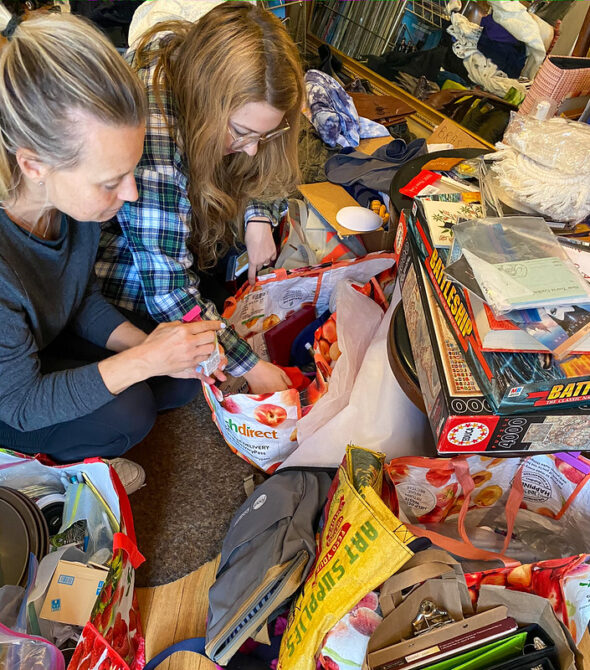 Erin Fitzpatrick and another swap attendee go through bags of donated swap items in a Pop Up Swap at Sandy’s Busken’s apartment. Photo by Michelle Ng-Reyes

“I was immediately obsessed with Sandy and her company, because I love fashion, I love being fashionable,” said Kempinski. “But I am also now obsessed with the amount of waste that goes into fast fashion.”

Busken started Pop Up Swap X in 2011, which focused on hosting vintage clothing swaps in different areas of New York. Now, she’s expanded her company and created Dear Mess, where she goes to client’s homes to declutter and redecorate their homes.

“There hasn’t been a day that’s gone by that I haven’t had work or interest in it,” said Busken. “The schedule is always full. I think people see now that organizing their home is just such a critical part to seeing themselves where they’re headed.”

Dear Mess is a zero waste company, and any furniture, clothes, or other home items that the client does not want anymore. Busken collects the items herself and finds new homes or small markets for the items to go to.

“I already knew the power of the circular economy, and how simple it was,” said Busken. “And then I just started increasing my resources, locating places in the city, wherever the clients are located that I can donate right away, whether it’s the linens and the towels to the local markets or shelters nearby. It’s just a Google Search. It’s more fulfilling than throwing it in a trash bag. And it takes seconds.”

The “circular economy” that Busken refers to is a term that she and many others in the waste reduction community use in regards to their work.

While Busken already finds it fulfilling to be able to make sure that the items she gets from clients go to new homes, friends or other people who are in need of the items, she has had many clients that have left a bigger impact on her and reminded her of the importance of her work.

“The very first client I went to was pregnant, and her husband was a hoarder,” said Busken. “There was no space for the child. So this was something she did for her mental health and her home health and for her child. In that moment, I knew that I was helping people and I don’t want to walk away from it. I know I can help people with this.”