Snapchat is a major news source for teens 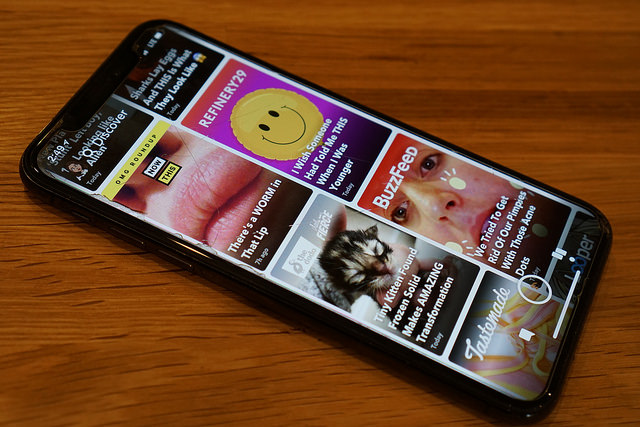 Snapchat is how many teens get their news. Photo by Caroline Skinner

With teens checking their phones over 150 times per day, the younger generation is consuming news in a very different way than their parents.

For teens, much of that time is spent on social media apps. A national survey conducted by The Associated Press-NORC Center for Public Affairs Research stated that 75% of American teens are on Snapchat, a messaging app that has evolved into many users’ source for news and entertainment.

“I get my news on Snapchat, while I’m discovering people,” Jake Gomez, 15, said. “My mom, she be watching the news and she be on TV and stuff.”

Josie Murmann, 15, and a student at the United Nations International School, noticed the same generational gap. She said that most of her peers used Snapchat as their main news source, and that none of them watched the evening news as their parents did.

“I watch it (Snapchat) because it’s so short, and it gives me enough information that I can actually talk about the news,” Murmann said. “They just get to the point really quickly.

In 2015, Snapchat introduced their Discover feed, which mixes hard news content with entertainment and celebrity updates. Featuring content from major news outlets, it appeals to younger generations because it’s of it’s short and direct nature.

“The media is all about eye-catching things at this point, so they (Snapchat) focus on the things that you want to hear and they say it really quickly,” Murmann said. “That’s why I think a lot of kids my age actually listen to it.”

According to a study done by the Pew Research Center, the percentage of Snapchat users who get their news from the app increased from 17% to 27% between 2016 and 2017. Competitors such as Facebook and Instagram are also major news sources for teens, but experienced much smaller increases over this same time period. The jump for Snapchat followed an update that aimed at giving the Discover page an even more prominent and distinct role within the app. The new and improved feed placed news sources next to a variety of other engaging content,   which drives increased engagement among young users.

“They make it easy to understand,” Chris Jake, 15, said when speaking about why he prefers Snapchat over other apps. “There’s a bunch of channels that you can watch on Youtube and stuff, but on Snapchat you don’t have to watch a whole 25 minute video. It’s just the the basics.”

Emerson College professor, Vincent Raynauld, has studied social media and journalism and observed several trends among teens regarding how they get their news. It turns out, the “how,” “when,” and “why” of teens consuming news are all different from their parents’ generation.

“Teens increasingly rely on mobile media,” Raynauld said. “The second thing that’s important to keep in mind, is that they tend to provide bite-sized information. So, it’s less about long-form articles and its much more about bite-sized pieces of information.”

Raynauld noted a contrast between parents watching the news while sitting down at home, and students consuming the news through the same platforms they use throughout the day for socializing. According to Raynauld, teens are checking their phones from the very first moment that they wake up.

Successful news sources that are unique to Snapchat, such as MSNBC’s Stay Tuned, have been careful to keep these trends in mind. With up to 35 million unique viewers per day, and 75% of those being under the age of 25, Stay Tuned appeals to young consumers by adapting their content accordingly. According to Raynauld, the key to success for modern news sources is cracking the news feed.

“So, what you want to do as a news organization is be able to penetrate that daily media routine,” said Raynauld. “By, for example, enticing these news consumers to subscribe and add them to their feed.”

With over 4 million subscribers and counting, Stay Tuned has succeeded in that goal. Targeting teens through style and strategy, they have reached young viewers in a way that traditional news sources are unable to. According to the executive producer, Andrew Springer, Stay  Tuned takes aim at younger consumers by having their hosts speak with casual language, keeping the reports concise, and including catchy titles and pictures. It’s these kinds of strategies that have driven it’s success over competitors such as CNN’s failed show called The Update, which flopped in under 5 months.

Despite differing sources, students and parents are still able to discuss top stories and current events. Traditional news sources like the New York Times and the Economist now offer mediums for every generation, from the touch screen to the printed page.

“We find out about [new stories] in different ways, but then we talk about them a lot at home all together,” said Cesaretti. “So in the end we all have the same information.”

[…] has become a major news source for teens; between 2016 and 2017, according to the Pew Research Center, the percentage of Snapchat users who got their news from the app […]