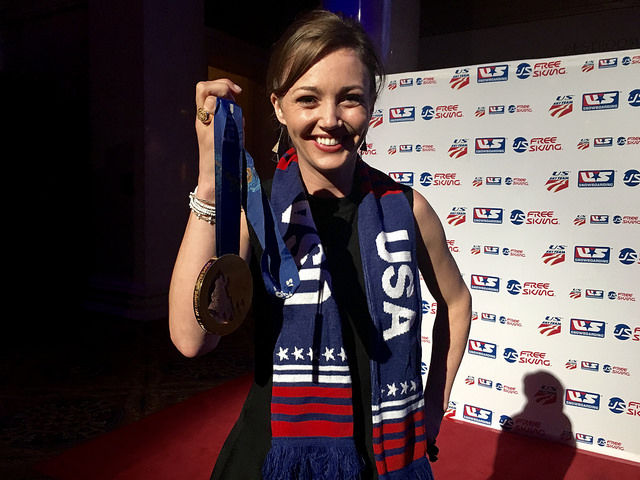 About 30 United States ski and snowboard olympians gathered at Cipriaini Wall Street for the 50th anniversary of the New York Gold Medal Gala yesterday. The fundraising event raised over $1 million, out of the $36 million budget needed, for the U.S. Ski and Snowboard team athletes that are part of the United States Ski and Snowboard Association. Although the athletes came together to raise funds to keep the sports alive, the sport of snowboarding has hit a plateau. Conditions on the mountains are declining and the sport is becoming more expensive with the price of lift tickets high and equipment even higher, athletes said.

“With conditions being pretty poor nobody wants to put all that money into the sport purchasing equipment and travel,” said Olympian, Faye Gulini, 24, of Salt Lake City, Utah at Friday’s event.

The past two or three seasons have been the hardest on snowboarding. The training facilities and resorts need to rely on making handmade snow because there are less snowfalls .

“One year I think we had 50 percent of our competitions cancelled because we didn’t have enough snow to build the actual venue and build the courses,” said Gulini.

It’s hard for Olympic gold medalist, Kaitlyn Farrington, 26, to believe that snowboarding is dying, but with less snow prices at the ski resorts are going up.

But Farrington and all the U.S. Team athletes have support from the United States Ski and Snowboard Association that helps pay for their travel and competitions. Farrington said she has strong sponsors that support her life outside of snowboarding so she doesn’t need to work on top of all of her training and competing.

Ross Powers, 37, was the 2002 snowboard half-pipe gold medalist and now coaches at Stratton Mountain School in Vermont. He said the higher prices of equipment, lift tickets, and travel affects his students. With only 16 kids in his program this year, the number has fallen significantly.

“Snowboarding has kind of been on a standstill, definitely people are still getting into, but it doesn’t seem like it’s growing as big as it was back in the day,” he said.

Powers does have scholarships set up with the Level Field Fund that can help kids interested in pursuing a career in snowboarding, but the sport is still at a plateau. He said younger kids are getting into freestyle skiing because they can do the tricks and jumps as snowboarding without having to transition to a snowboard.

But without the support of the U.S. Team it is hard to get the funds to start snowboarding and to keep up with training, athletes said.

“Each of our programs, be it alpine, freestyle, snowboarding, etc. is evaluated based on needs for that particular program to be competitive internationally,” said Kelly, who has been with the association for 30 years.

But funding only comes when you are at the top of your sport, said Olympic gold medalist Jamie Anderson, 26, of South Lake Tahoe, California. Anderson grew up with eight siblings and didn’t have that much money to support her snowboarding career.

“I was selling golf balls at the golf course and saving money for nationals,” said Anderson. “I could have really used the support of the U.S. Team when I was 12, 14, 16 years old.”

Anderson relied a lot on her sponsorships to make it to the Olympics. When she was younger it was tough to find the money to sustain her snowboarding.

With the prices rising on equipment and lift tickets it will be hard for skiing and snowboarding to rise back up again as these sports only attract a certain demographic of people, said athletes.

“People are going to want to ride the mountains forever,” said Anderson.