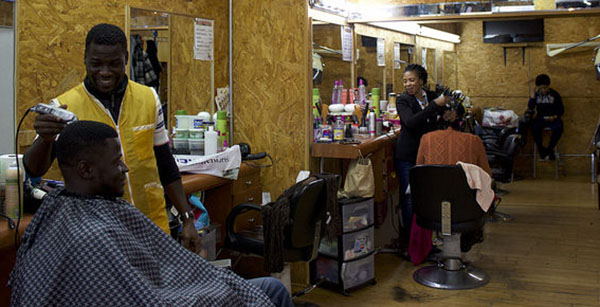 The patrons of Dred Barbershop and Salon get haircuts yesterday afternoon. Photo by Keziah Tutu

Not every African immigrant is upset over Trump calling their homeland a “shithole.” At Dred Barbershop and Salon in the South Bronx, some believe he was right on target.

“Trump is 200 percent right. Some parts of Africa are a shithole,” said Ghanaian immigrant Mohammed Ali Akirugu, 34, a regular customer at the barbershop. “The way he said it was not right, but what he said was right.”

President Trump’s comments were allegedly made during a bipartisan meeting with senators in the oval office where, they discussed a deal to protect America’s borders and immigrants from Haiti, El Salvador and African countries who are on temporary protection status (TPS).

Akirugu, a Ghanaian immigrant and regular customer at the barbershop said the economy back home made it difficult for him and now his younger brother, who recently graduated with a political science degree from the Islamic University College, Ghana, to find work.

“We video chat every day and nothing has changed since I left,” he said. “If you don’t have political connections somewhere you can’t get a job, that’s a shithole.”

According to a 2012 study released by africaneconomicoutlook.org, Ghanaian youths make up an estimated 33 percent of the population. Youths between ages 15-24 have an unemployment rate of 25.6 percent, twice that of those between the age of 25-44 and three times that of those 45-64. 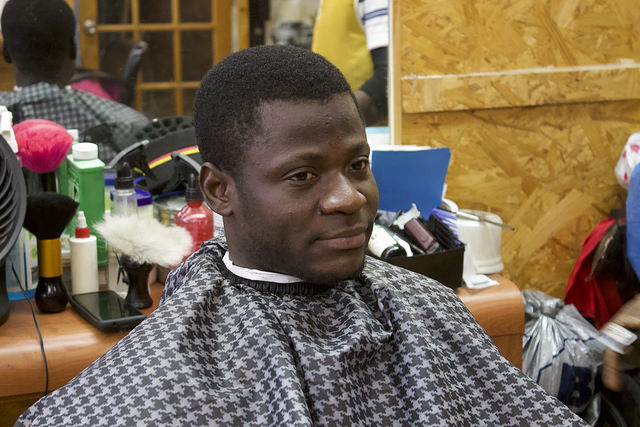 Solomon Oolong, a Ghanaian immigrant patiently waits for his barber to prep him for his haircut and shave at Dred Barbershop in the South Bronx. Photo by: Keziah Tutu

Solomon Oolong, 27, a Ghanaian immigrant who emigrated to the United States two months ago, shared the experience of his inability to find work after graduating in 2012 with a degree in Business Administration from Valley View University in the Greater Accra region of Ghana.

“I literally begged for work to do, but everywhere I went, there were no openings,” he said. “We have all the resources in Ghana, but our leaders won’t help us so we end up living in hell.”

Oolong supported himself by opening an internet cafe with money he earned from his National Service at a military hospital in Accra, Ghana’s capital city. National Service is temporary paid labor all graduates of accredited Ghanaian institutions are required to perform for a year to the nation.

“Some of my mates who I graduated with came to me for work,” he said. I couldn’t believe it. These guys were graduates.”

Oolong said he does not find President Trump’s comments as an insult or an attack on his identity as an African man.

“Trumps comments don’t affect me because he doesn’t know me personally,” he said. “He’s speaking to our leaders. It’s a wakeup call for them.”

Kofi Addison, a 35-year-old barber who has worked at the shop for 11 years, also expressed his support for President Trump’s comments.

“I love my county, I love Ghana but the politicians there only enrich themselves,” he said. “My job is to work hard, improve myself and hope my people back home change their mindsets.”

Germain Ouedraog, 25, a college student from Cote D’ivoire, was among the few who expressed their anger towards the president’s comments.

“What he said was not right,” he said. “He should think about the past, the United States would not be this great nation without Africans.”

Ouedraog came to the United states on a student visa, with the hopes of completing his college education and finding a better job to support his family back home.

“I’m paying my taxes to this country, not to Africa,” he said. “If I come from a shithole country, it is my tax money that aids development here.”

He said the president should show more respect to the immigrant community and the leaders of African nations should invest their resources in their people and nation.

“It is time to think of ourselves and stop depending on others,” he said. “If Africans would unite and start fighting for ourselves, maybe Trump would see how great we really are.”

Nene Adi is my name, but i will never never back Trump comments

over what he called Africans , maybe has has forgotten it was the most Africans who build USA . thank good his now president to this country if his
grandparents had not arrive from Germany he thinks he might also
enjoy the foundations of his grandparents. let not go there to lay more down