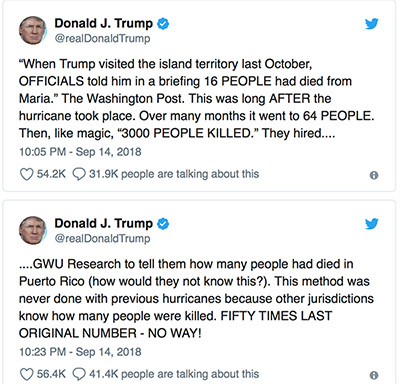 A few days after President Donald Trump called the updated death toll, following Hurricane Maria, a plot created by the Democratic Party to make him look “as bad as possible,” some Puerto Ricans are still fuming.

“He’s a liar, and he’s manipulating everything,” said Jorge Ayala, a restaurant manager at popular Puerto Rican restaurant La Fonda in East Harlem and a native of Puerto Rico. The majority of Ayala’s family lives on the island, and survived the storm and its aftermath. “No research is perfect, you know? I understand that, but there was serious, good-intentioned research that documented that almost 3,000 people died because of the storm.”

Vincent Ollivier, 67, of Massachusetts and a retired registered nurse, visited the island regularly and still has friends in several cities. He called Trump “ill-informed” for both his comments and his behavior initially following the storm.

“He just made me nauseous,” said Ollivier. “He is a very racist man, and very self-absorbed. His ego knows no bounds.”

Ollivier said the Puerto Rico coroner’s reporting process needs improvement which led to the inaccuracies of the numbers, but he believes the updated death toll report.

In the week following the hurricane, initial government reports put the official death toll at 16. It was later updated to 64. Following an independent study from George Washington University, the death toll was updated to state that 2,975 people died during the storm and in its aftermath. President Trump claimed that the numbers went up “like magic.”

The GWU study found that listed causes of death on death certificates issued following the storm included cardiac arrest, respiratory failure, and septicemia. According to The Wall Street Journal, the researchers concluded that causes of death were misassigned, meaning that deaths that were caused by Maria were not linked to the hurricane.

While the report is only an estimate, with researchers believing 22 percent more people died during the six months after the storm than would have if the island had not been hit, it is consistent with similar estimates from Harvard University and Penn State University.  According to NPR, those most likely to die in the storm’s aftermath were poor people and the elderly.

Most of Luis Santiago’s family lives in the south of Puerto Rico, in the towns of Arroyo and Guayama. Santiago, 45, of San Antonio, Texas, was shocked by the president’s comments, but believes the government has supported Puerto Rico.

“In a way he is right, as the death toll at the beginning was rather low,” said Santiago, “What made the death toll rise was the response time by the government of Puerto Rico. After the hurricane was the most crucial time. Many waited and had no help, day after day, week after week, listening to the radio and waiting for the angels.”

But Santiago does not believe the GWU study’s death toll. He believes that the numbers of dead were actually higher.

“Many officials, including in Guayama, place the death toll at about 4,000 dead,” Santiago said. “Many people were elderly and sick to begin with, but this just pushed it over the edge. Makeshift hospitals were handling suicides, strokes, and breathing issues due to high mold counts. What I see is there should be two death tolls – one from the initial impact, and the other from delayed response times.”

Santiago added that while he thought Trump’s comments were inappropriate, he did not blame the United States for the delayed response to the hurricane.

“What happened in Puerto Rico is a shame, but the real blame lies in the hands of Puerto Rico’s politicians,” he said, citing corruption on the island. “They knew the condition of people on the island, but they did nothing to really prepare. Regardless of what some may think Puerto Ricans viewed the U.S. as a savior. I know as well as my family that if the U.S. did not help more people would have died. The real blame lies with them and not Trump.”