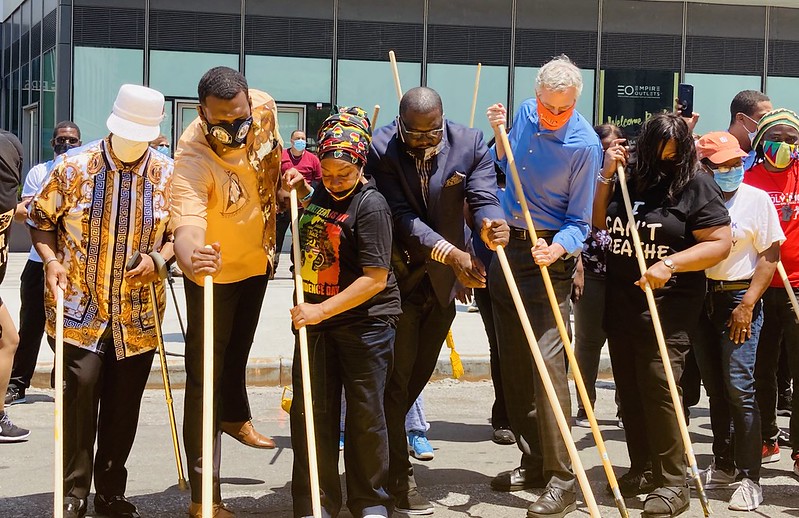 “What do we want? Justice! When do we want it? Now!

The murals were painted close to  Staten Island Ferry,  Borough Hall, 120th Police Precinct and the Staten Island Supreme Court. The street is considered the gateway to Staten Island.

Juneteenth is the date Galveston, Texas slaves were told that they were free. This was two years after slaves were freed through the Emancipation Proclamation.

Mayor Bill De Blasio told the crowd that the city is committed to fight racial injustice.

“We are working on strategies to form a racial justice and reconciliation commission,” he said. “It will be similar to other Truth and Reconciliation Commission’s in other parts of the world to know what went wrong and how can it be corrected with a deep historical reflection.”

District Councilwoman Debi Rose, remembered the murder of Eric Garner who died while in a chokehold by police for selling loose cigarretes near the ferry.  The officer was never charged.

“It was here at this point where Eric Garner was killed in 2014 by NYPD officer Daniel Pantaleo through an aggressive and illegal chokehold,” she said.  “So painting here today is to call on the authorities to end injustice and racial biases.”

Amoy Barnes, a city council candidate said the street murals should remind residents  that people of color have been suffering for too long and it’s time for words to be put into practice.

“Black Lives Matter is a movement not a moment,’’ Barnes said. “There is a need for consistency, enactment of legislations, voting, census participation and other actions to ensure inequality and injustice against blacks are fought.”