Dee and Scott McGrath aren’t going anywhere. When Hurricane Sandy battered the coasts of New York and New Jersey Oct. 29, the storm surges destroyed everything they owned. In one of the hardest hit areas of New York, residents like the McGrath’s of Staten Island’s New Dorp Beach refused to give in to Mother Nature.

“What, am I going to live in fear for the rest of my life?” said Scott, 45. “I can be in the house and put on a switch and get electrocuted. Do I not put on a switch?”

In fact, the McGrath’s embraced their beachfront community so much post-Sandy that they formed their own non-profit, Beacon of Hope New York, to encourage local residents to stay. The McGrath’s, along with neighbor Stacey Sclafani and Jessica Ardi of nearby Midland Beach, started the grassroots Sandy recovery organization as a way to not only promote solidarity amongst residents, but also provide resources and help to many of their displaced neighbors.

“(We) wanted to reenergize the neighborhood and show that we are staying so that these houses don’t become abandoned,” said McGrath. 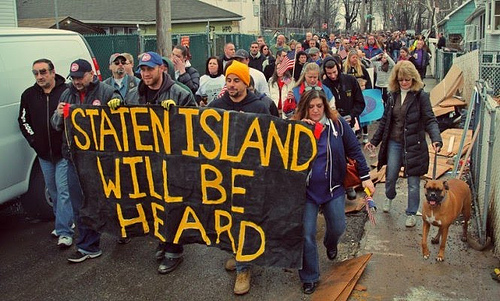 Beacon of Hope New York, a grassroots Sandy recovery group founded by Dee and Scott McGrath, at a rally in New Dorp Beach, Staten Island. The McGraths formed the non-profit advocacy group as a way to provide assistance to those displaced by Hurricane Sandy and to push local residents to stay and rebuild. Photo courtesy of Beacon of Hope New York.

Moving on and the Home Buyout Plan

Unlike New Dorp Beach, residents of nearby Oakwood Beach are moving out and moving on. Of the 184 residents in the small beach community of Fox Beach, 170 homeowners have agreed to sell their homes to the government under a $400 million home buyout program introduced by Gov. Andrew M. Cuomo.

“There are some places that Mother Nature owns,” Cuomo told a crowd at the College of Staten Island Feb. 25 shortly after announcing the Fox Beach community of Oakwood Beach as the pilot program for his home buyout plan. “I want to be there for people in these communities. I want to give this parcel back to Mother Nature.”

The program, which would pay qualified homeowners 100 percent of their property’s pre-storm value, does not appear as advertised, said McGrath.

The McGraths, who have owned their home since 2002, argue that the mortgage payments left on their home is not proportionate to what they would receive from the buyout; even if they wanted to leave, it would not make sense economically.

“They’d have to offer me twice what the house is worth for me to accept the buyout,” said Dee McGrath.
Beacon of Hope New York recently started a campaign to promote their neighborhood by handing out “We Are Staying!” lawn signs to let homeowners show that they are not leaving.

“New Yorkers, we take care of ourselves,” said Dee McGrath.

Over the six months since Hurricane Sandy, a long road to recovery remains. The McGraths were without power for nearly two months, and did not have heat until Jan. 2. They still have mold problems that need to be addressed before they can begin rebuilding the interior of their home. Many other homes are still in need of repairs, with many homeowners facing more uncertainty than confirmation.

“It was the perfect storm,” Dee McGrath said. “You had the full moon, high tide. It was just perfect timing for the worst storm you could possibly have.”

The new Federal Emergency Management Agency flood maps, if approved, would add more than 65,000 structures in New York and New Jersey to the 100-year flood zones. However, it is unknown when the new FEMA flood maps will be approved or if people will be reimbursed for the costs. State officials estimate that the new requirements won’t be released until at least next month.

Many areas of New Dorp Beach have expanded to the “V Zone,” the most vulnerable federal flood zone, which changes the flood base elevation from 8.9 feet to 15 feet. As a result, many homeowners are reluctant to begin the process of applying for grants and having their soil tested to see if their foundation can be raised, said Dee McGrath said.

“I really thought we’d be recovered by now,” she said.

Another issue homeowners face is the added costs of repairs to their homes, much of which are not covered by insurance. Some homeowners were using mortgage money to pay for repairs, leaving many behind on their already deferred federal home mortgage payments.

Maintaining the ‘American Dream’ at all costs

“Restoring communities damaged by Superstorm Sandy is our department’s highest priority and these Public Assistance reimbursement funds will help each of the affected communities, such as New York City, to get their fiscal affairs back in order,” said NYS Division of Homeland Security and Emergency Services Commissioner Jerome M. Hauer in the release.

Yet the efforts by the state and federal government have not been soon enough, according to the McGraths, which is why they formed their own model for recovery and neighborhood restoration. Beacon of Hope New York is currently in the process of receiving grants for beautification efforts in New Dorp Beach and organizing events in conjunction with volunteer service organizations such as Yellow Team and Boots on the Ground.

And for the McGrath’s, there’s no place like home, no matter how prone it may be to Mother Nature’s wrath.

“This was all down to the bare wood,” said Scott. “Everything here was done by family members, friends, and people that became friends. They broke a sweat building this house and helping us.”

Where is the money? I have not seen a penny of help for repairs.