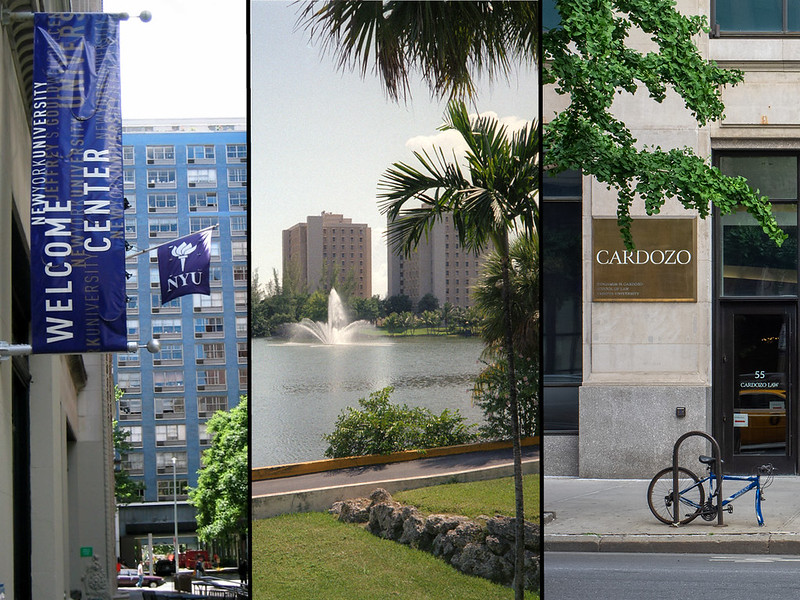 New York University, the University of Miami, and Benjamin Cardozo School of Law have all taken different approaches to returning their students safely in the midst of the Omicron wave this semester. Photos by Wally Gobetz, Dave Dugdale and Ajay Suresh

“I had class in-person this morning for the first time and really enjoyed being around everyone again,” said Blake Atwell, a senior at the University of Miami. “I’m also a last semester senior so I’m trying to appreciate all those little moments with everyone while I still have them.”

Roughly  10 to 15 percent of schools like Cardozo Law School in New York City and the University of Miami have said they made the decision to start the semester with two weeks of fully online classes in order to prevent a greater spread among its students. They also hoped this would help students figure out their travel plans, have a short quarantine period if needed, and have some extra time to find and get their booster shots before their first day of in-person classes on Jan. 31.

“Two weeks prior from today, they sent an email saying students are mandated to both wear masks and be boosted,” said Alex Hernandez, a University of Miami student. “And I think [masks and boosters] should definitely be requirements due to the spikes we’ve seen recently.”

While some students thought that these two virtual weeks were helpful, others felt that ultimately, it did not help them or others enough and thought it discouraged them from learning at the best possible level.

“It’s awesome that I get to be in class while in pajamas, but it also makes me disinterested in my classes honestly,” said Hernandez. “I like to be active and having something as small as putting on a fresh set of clothes or buying books pushes me to acknowledge the grind needed to be a hard working student.”

Sophie Winnick, a first year law student at Cardozo, said that she was worried the two weeks would end up becoming a longer period of time online, which she believes would have negatively impacted her learning experience overall.

“I personally struggle a lot with “Zoom U” and I find myself lacking motivation and the attention span, so it’s important to me to be in person,” said Winnick. “I was going to put off law school for a year to ensure it would be in person. My entire undergraduate senior year was online and I don’t think I got nearly anything out of it.”

Some students also said that the two weeks online affected their mental health.

“Missing out on the social aspect of in-person classes and staying inside or at home for the bulk of the daylight hours during weekdays was not ideal for my mental health,” said Ryan Whyte, a first year law student at Cardozo. “The effect wasn’t all that significant since it was only a two week period, but a longer period or even full semester of remote learning likely would have had some noticeable mental health ramifications.”

“I know that I would have a very difficult time learning the material online,” said Audrey Kim, a first year law student at Cardozo. “Law school classes are discussion-based and I don’t like participating on zoom. Additionally, I think socially I would have had trouble because I like seeing my friends every day.”

However, Kim added that she thought the guidelines were helpful and ultimately, she supported them.

“Even though online school sucks, I would rather be on Zoom the entire semester than one of my classmates or myself get seriously sick with COVID and have to go to the hospital,” said Kim. “It’s not ideal but I’m willing to sacrifice a lot for the well being of the student body and faculty.”

Not all schools felt that the two weeks initiative was necessary, such as New York University. Luke Di Liddo, a freshman at NYU, said that he is glad that his school decided to take that option and that he feels protected enough with the measures his school is taking to slow the spread of Covid-19.

“I prefer in person much more than online,” said Di Liddo. “The negative impact online school has on my mental health is significant, not to mention the huge difference in level of investment in class when online rather than in person.”

While Di Liddo said he understands why many schools have chosen to start their semesters virtually, it is still discouraging to him that so many changes and measures need to be taken in order for students to have a safe college experience.

“I appreciate that my school is trying to keep me safe, but I also wish it didn’t have to be this way,” said Di Liddo. “I think a lot of people feel like they are losing part of a very formative and valuable time in their lives, and there’s no easy fix for that.”