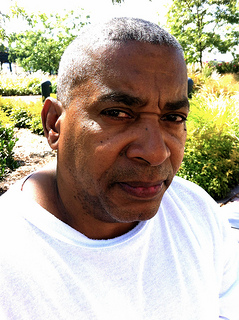 Nelson Quinones, 53, who currently resides in a Hunts Point veteran shelter in the Bronx, finds hope in the Save a Suit “One Million Dollar Pledge for Veterans”. Photo by: Talia Avakian

In 1980 veteran, Nelson Quinones, was rushing to get to the car repair company where he worked when he was hit in a head-on collision that left him with a cracked skull and a broken leg. His two-month recovery in the hospital cost him his job and he needed to turn to veteran programs to help him get back to work.

Quinones, 53 a native of Puerto Rico, spent the next 33 years at four different veteran programs hoping to get the skills he needed to get back to working, but nothing worked. He is still jobless.

For homeless veterans like Quinones, receiving the basic training skills needed to get a job has been hard, but a new program, Save a Suit, which offers veterans suits and job training, may provide hope.

“When I look at the programs I’ve been in, I don’t see help and I don’t see change” said Quinones. “Today is the first time I see a program that could give us the training we really need.”

In addition to employers seeking workers, there were workshops on leadership building, social networking, marketing, and how to land a job, the program’s aim was to “provide veterans with the confidence needed to become proactive in interviewing with employers,” said executive director Jessica Ewud.

“Many of the programs still train veterans to do what they are told in a yes, no, fashion, a real problem when attempting to aid veterans transition from the military world to the civilian,” said Ewud.

This was the case with the programs Quinones participated in. Quinones turned to a veteran facilitation program in Hunt Point, Bronx, where he currently resides, in hopes of gaining the tools needed to get back to working. Instead, the program only kept him further “stuck.” 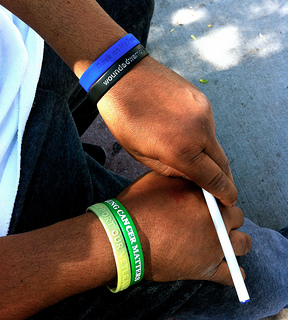 Quinones wears the wristbands of the veteran facilitation programs he has participated in. Photo by Talia Avakian

The big problem for Quinones was the way the program functions.

“If you say something to the faculty regarding changes you want to see, they try to punish you,” Quinones said. “Half the time, when we try to talk to the staff, they cut us off. I couldn’t finish in a program like this.”

Not only was the environment of concern for Quinones, but also the lack of what was provided.

“As a program, they are supposed to help us get our place, to get an education, but they don’t focus on teaching the most basic skills like using a computer,” he said.

For Ewud, confidence achieved through focusing on basic skills is the key.

“You can tell from the faces of most of the people who walk in that they are upset,” said Ewud. “What we aim to do is to provide them with the training to give them a newfound confidence.”

This was the case for 55-year-old veteran, Mark ManFredi.

Having served in the US army for two years, ManFredi faced difficulty finding a job when he came home.

“When we returned we weren’t looked at favorably,” ManFredi said. “If you wanted a job, all you could find were the low paying ones, but they didn’t have services like this one today.”

ManFredi dedicated 17 years to assisting veterans at the Providence Heath Center in Rhode Island before moving to Hoboken, NJ. For ManFredi, programs like Save a Suit are crucial for future returning veterans.

“I felt my job skills were extremely limited back then,” ManFredi said. “Programs like this give you the confidence to utilize your background as a veteran, and get the job.”

A few feet away, Quinones sat with a newfound hope in the program’s mission.

“When you don’t feel good at these programs you leave, staying in the street most of the time,” said Quinones.

“Today’s program was one of the first times I’ve felt good in a long time,” Quinones continued as he wiped tears from his eyes.

homeless • jobs • Save a Suit • veterans