The 11th of September at O’Hara’s 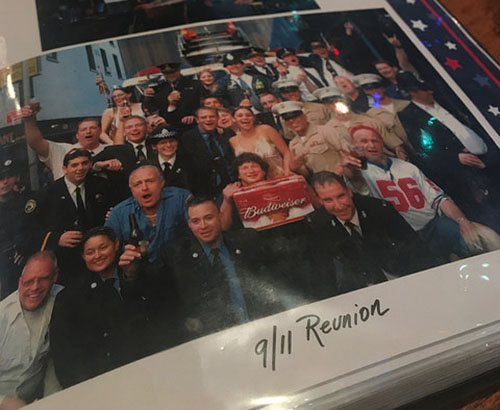 A photo of a memorial reunion at O’Hara’s Restaurant & Pub in Lower Manhattan. Photo by Farnoush Amiri

It was a dissonantly quiet Monday morning in Lower Manhattan. Bartenders at O’Hara’s Restaurant & Pub silently cut limes and lemons and placed them in plastic containers to later garnish the drinks of the almost 6,000 patrons that were expected to walk into the pub that day. The Battery Park watering hole normally opens at 11 a.m. on weekdays, but on this day, for the past 16 years, they unlocked their doors at 8 a.m. in honor of the attacks on the Twin Towers.

Tri-State area natives and tourists alike began to slowly stumble into the bar, located on the corner of Greenwich and Cedar streets, and as they sipped on their cold Bud Lights and Heinekens, each person participated in a moment of silence at 8:46 a.m. to commemorate the tragic moment the first plane hit the north tower.

Two of the first patrons in are Paul Fischer and his son, Frank, who have been coming to O’Hara’s from Union Beach, New Jersey, for the past 16 years. The father and son were some of the first volunteers who came over on the ferry from the Garden State to help join the rescue efforts in the piles and rubble throughout the days following the attacks.

“It’s going to be crazy in here in a little bit,” Fischer said, preparing himself for the bittersweet day ahead. “You won’t be able to get to the bathroom.”

For Fischer, a member of New Jersey’s Sheriff’s office, O’Hara’s represents a tradition for him and his son: a place where he knows almost everyone who walks in and where almost every one of his drinks is on someone else’s tab.

Among the roughly 2,750 people who died that Tuesday morning, many were regulars of O’Hara’s, whether it was for an after-work drink with a colleague or on their lunch break for a burger and fries.

“This place used to a happy-hour destination for those who worked in the area,” said Eric Tremaine, a bartender at O’Hara’s. “But everything changed after that day. This place represents so much more.” 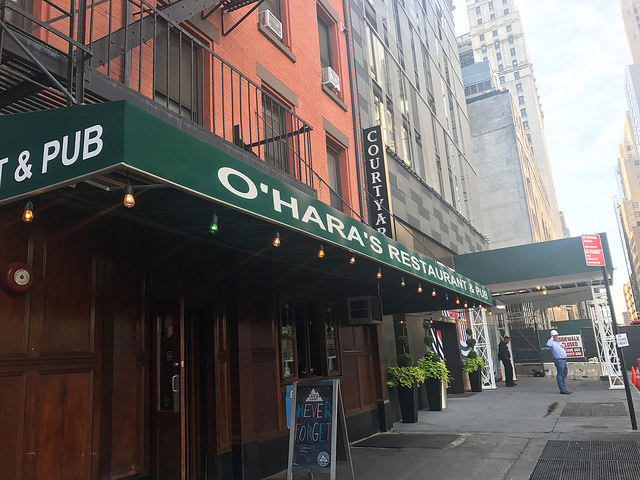 O’Hara’s the morning of the 16th anniversary of 9/11, before the crowds came in. Photo by Farnoush Amiri

The eatery and bar, which first opened its doors in 1983, was also a victim of the attacks, with most of its first and second floors being demolished and left uninhabitable. Fortunately, there were no casualties for any of the staff, who hid down in the basement when the first plane hit. The infamous Irish bar restored and opened its door back to the shaken and grieving community seven months later.

On the first anniversary of the attacks, a New York Firefighter’s badge was ripped off of his shirt and stapled onto the wooden walls of O’Hara’s – by the end of that night there were around 250 embroidered patches and badges covering the walls. Today, the bar proudly displays over 6,000 insignias, which have been gifted from law enforcement officers and firefighters from across the country.

For any newcomers, the traditional Irish bar has two scrapbooks underneath the beer taps that highlight the days, weeks and years since the attack. The lamented pages show the initial damage, the months of repair and rebuilding and the ensuing commemorative events that have followed. Amongst the photographs and news articles detailing the tragic events are letters from patrons, who left the establishment with a sense of understanding of the significance of that day for O’Hara’s and the community that surrounds it.

One family, who traveled from Oak View, Calif. wrote to the owners and said, “Thank you so much for your place and what you stand for.”

The four coordinated attacks that occurred on this day almost a decade and a half ago seem to still ring through the lives of those directly affected and the country as a whole, but for O’Hara’s, it represents a day where anyone who lost something or someone can come, have a pint of Guinness and reminisce on how far they’ve come.

“If you went to my funeral, I would want it to be like this,” Tremaine said as he looked around at the people gathered to remember the lives lost. “I would want you to enjoy and celebrate my life and that is kind of what today is for this place.”