The art of gentrification in Bushwick 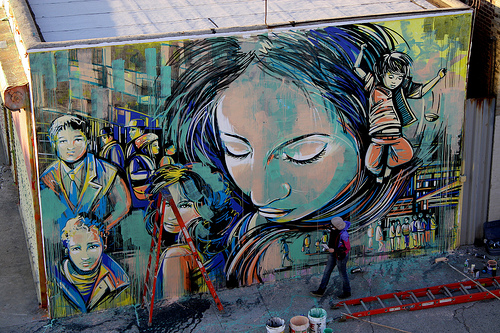 Artist Alice Pasquini is shown painting her latest mural. She traveled from Rome to be a part of the Bushwick magnet. Photo by Gabrielle A. Wright.

Struggling artists and hopeful gallery owners fled to Bushwick in search of building a new art scene. They were also in search of cheap rent so they acquired Bushwick’s abandoned buildings. Now, hopes of the area becoming a breeding ground for a new, experimental art scene have become a magnet for more people, more businesses and anything else indicating “next big thing”.

With each next big gallery opening, Bushwick’s art scene moves a little closer to being a pricey twin to Williamsburg’s art scene. As a result, some older Bushwick residents aren’t only priced out of their neighborhoods, they’re also disconnected from the art community coming in. But some artists are attempting to connect.

William Powhida, an artist who relocated to Bushwick from Williamsburg a few years ago, highlights the “social significance of the $13 hamburger”, brought into Bushwick by a wave of artists in his piece, “Things I Think about when I Think about Bushwick”.

“There are changes that people in the community are in support of,” said Powhida. “There’s less crime, less shootings, there’s not a drug war going on anymore, but at the same time, prices of milk goes up. The restaurants come in and the hamburgers are $13 dollars. There’s not a lot of development centered around the community. It’s centered around artists and their tastes,” he said.

In turn, some of Powhida’s work and interests are centered on Bushwick’s art world and how gentrification pushes much of the community onto the outskirts.

Dalton, co-curator of Auxiliary Projects, an art gallery in Bushwick which sells pieces for under $300 in order to make them available to a wider and more diverse audience. She feels that although many of Bushwick’s changes are centered on artists, they have supported the community by turning empty spaces into useable ones.

“Look, people are here mainly to show their work, not necessarily to represent the community,” said artist, Deborah Brown. “We artists need to think of ways to build their community and be a part of the art dialogue.”.
Brown is the owner of Storefront Gallery and also on Bushwick’s Community Board. Many of Bushwick’s issues, from street lights to education initiatives are familiar to Brown. She’s also very keen on the art community finding ways to become more involved in Bushwick.

“…the community doesn’t really go to galleries,” said Brown.”…it’s presumptuous; they’ve been here for 30 years. They aren’t interested in seeing white artists. Who’s going to do that?”

“No long-time Bushwick resident has stepped foot in [my] gallery,” said Dalton.

Joe Ficalora, creator of 5 Points Bushwick , an ongoing street art project between Wycoff and St. Nicholas Avenue on Troutman Street, said Bushwick residents would probably visit Bushwick’s 50-plus galleries more often if they could connect to them more. 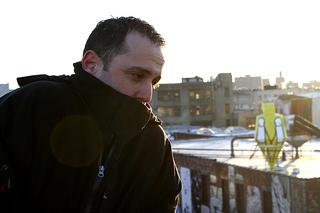 Joe Ficalora looks over his internationally recognized street art project, 5 Points Bushwick. The Bushwick native says it brings Bushwick – and his self – to life. Photo by Gabrielle A. Wright.

Ficalora grew up in Bushwick and said his exposure to baseball kept him out of trouble. He feels art could do the same for kids today.

“It’s about sharing,” he said. “Why can’t we be responsible for having that impression for the community, for the kids?”

Brown feels that that despite the changes in the physical landscape, artists should get to know their neighbors.

“We have totally different experiences but it gets you out of your cocoon,” she said. “The art community has their own lives and they’re not drawn into the larger community unless they want to be. Efforts are just at the beginning but artists have to get the ball rolling,” said Brown.