The group Human Borders places water barrels like this throughout the Arizona desert. Volunteers hope to save the lives of as many illegal immigrants as possible. Photo by Rhea Mahbubani

Arizona’s Sonora Desert lies under a seemingly endless blue sky, framed by sun-drenched, rugged mountains. The topography is dotted with shrubs, cacti and weeds, forming a landscape that is seductively beautiful, yet inherently dangerous.

The scorching sun forms cracks in the parched soil, littered with tangled roots and prickly shrubs. The area is home to rattlesnakes and mountain lions, as well as cacti with injurious thorns and branches. For those traveling on foot, the unpredictable terrain can cause blisters, burnt and scratched skin and eye injuries, while over-exposure to relentless heat that can soar to 116 degrees induces dehydration and, in many instances, death.

In the distance, a blue flag – simultaneously incongruous and at home in its surroundings – flaps vigorously in the wind.

“There she blows,” proclaimed volunteers of Humane Borders, a Tucson-based organization responsible for erecting the 30-foot flagpole and the water station it indicates. The group is jokingly called the ‘Love Crew’ by the U.S. Border Patrol.

What started in 2000 as a small group seeking to contribute has since grown into Humane Borders, or Fronteras Compasivas, a wellspring of humanitarian assistance aimed at alleviating the pileup of migrant deaths in the desert.

The porous Arizona-Mexico border has historically served as a gateway for migrants – a majority of whom are Mexican, Guatemalan, Honduran or El Salvadorian – en route to Arizona’s inner cities and beyond in search of ever-elusive work.

After the construction of the first border walls in 1994 – subsequently expanding to nearly 800 miles interspersed with vehicle and pedestrian barriers, fences, surveillance cameras and an increased presence of Border Patrol agents – the easier points of entry have been sealed off, pushing migrants into remote, inhospitable parts of the desert.

With approximately 2,000 people crossing the border per day, the death toll is high.

According to Bruce Parks, the chief medical examiner at Pima County Medical Examiner’s Office, the body count in 2010 stands at 194, which is ahead of the pace of 2007 and on par with the total number of deaths in 2009.

Humane Borders’  mission is to help the migrants who risk death to come to the U.S.

“Of course, we want safe borders,” said Sofia Gomez, the executive director and sole staff member of Humane Borders since January 2010. “But humane borders means that we don’t want anybody to get hurt or killed on our borders. That’s the mission under which we all unite.”

They help by providing water, a lifeline to dehydrated migrants.

“We’d rather carry water out to the desert than carry a body bag in to the medical examiner,” said Sister Elizabeth Ohmann, one of the organization’s founders.

Having taken shape as an initiative among Christian churches, the volunteer-run organization evolved into a multi faith-based initiative under the leadership of Rev. Robin Hoover, welcoming people regardless of their spiritual or political affinity.

In close collaboration with the Border Patrol, Pima County’s Office of the Medical Examiner and the Mexican Consulate, members of Humane Borders pinpoint the exact location of previous deaths. Ongoing and sometimes grueling negotiations with the Department of Interior earns them permits for the strategic construction and maintenance of water stations on federal, county, city and private land, which they hope will prevent a recurrence of dehydration-related deaths. 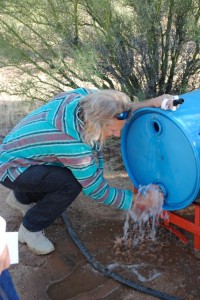 Joel Smith, from Humane Borders, fits a tap onto a water barrel in the Arizona desert. Photo by Rhea Mahbubani

“It’s simple — water is life-sustaining,” said Gomez. “A cup of water can save a life, and that’s why our organization’s founders came up with this plan.”

Since the first water station was set up on March 7, 2001, more than 100 water stations and 160,000 gallons of water have been serviced, with 70 trips scheduled between May and September, and 30 from October throughl April. These operations are entirely funded by church and individual donations.

The group’s water run on Oct. 16 was significant because it marked the installation of a brand new water station, recently named Brawley Wash, in the western part of the Buenos Aires National Wildlife Refuge. Volunteers also inspected six other existing stations.

Three volunteers — Joel Smith, Lance Leslie, and Raymond Daukei — rode with Gomez in a white Chevrolet truck equipped with a pump, hose, and water reservoir. It displayed the organization’s trademark logo of water pouring from a “drinking gourd” shaped like the Big Dipper.

At Brawley Wash, a new 55-gallon barrel was placed atop steel stands, nestled in the shade of a tree. At an incline a few feet away, a metal flagpole was inserted into the ground, and a piece of blue cloth, a remnant of a retired flag, was tied to a mesquite tree to direct migrants toward the newly-constructed water station.

“Tens of thousands of people have given their time for this cause,” said Leslie, a 39-year-old lawyer, keeping his eyes peeled for litter and track marks indicative of migrants’ presence. “We all think the same – if there was one life that we could save, then that’s good.”

In partnership with more than 100 sister organizations – parishes and human rights groups – Humane Borders offers multi-faceted humanitarian assistance. Volunteers travel to border towns and educate people on the harsh realities of crossing the desert. They also organize groups to clean parts of the desert where migrants discard their belongings.

Members are also discussing an official organizational presence in the neighboring Tohono O’odham Native American reservation, where a large number of deaths continue to occur.

Raymond Daukei, a member of this tribal community and member of Humane Borders fears, however, that these negotiations might not amount to very much.

The tribal government cannot officially allow humanitarian groups on the reservation for fear of appearing supportive to illegal immigration, he explained.

“But our culture is one of hospitality,” the 30-year old resident of Scottsdale, Ariz., said regarding the internal divide within the tribal community. “When people are far from home, we look out for them and try to feed, clothe and shelter them. With so many people crossing the border everyday, however, we are too inundated.”

Although a committed volunteer of Humane Borders, Daukei believes that within the larger context humanitarian services are a “Band-Aid,” since the real need is for immigration reform. 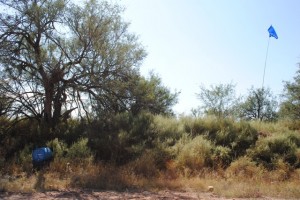 This past summer, with immigration the talk of the town, Humane Borders came under attack, despite its neutral stance. The trickle-down effect of controversial legislature, such as SB 1070, divided the community and made humanitarian work seem pro-illegal immigration, Gomez said.

After air was let out from truck tires and equipment was stolen, the organization was forced to move its headquarters to a location with a secure parking lot. The damage, however, did not end there. Between January 2009 and July 2010, Humane Borders experienced a 19 percent increase in vandalism at their water stations, with barrels being burned, stabbed and tipped over to let the water run out. Some even had a round of shots fired into them.

“During the summer, it was like a football match,” said Joel Smith, 47. “People would pull the stations down and we’d go out and put them back up again.”

Smith, a driver for the organization, bent down to inspect of a piece of rusted rebar, the top of which had been broken off.

“This is solid metal that can’t be broken by hand,” he said. “Someone must have driven a fast-moving truck into the flag post and pulled this out of the ground, breaking it. It’s obvious that a lot of people don’t want us here.”

Despite such obstacles, Humane Borders’ water stations have been credited with saving the lives of many migrants. The Border Patrol reported, for example, that 33 lives were saved in a single day in April 2002.

As a public administrator, Gomez realizes the necessity of clearer policies and procedures to deal with illegal immigration, but she encourages people to sometimes focus on the moral issues at hand.

“On our end, we would love to be out of business,” she said. “I would love to walk out of this position knowing that there are no more deaths occurring on our border but that’s not happening yet.”