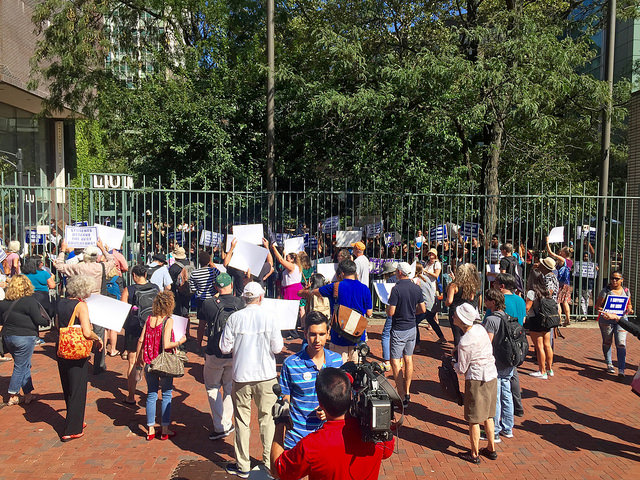 The first faculty “lockout” in American higher education history came to an end Wednesday night after a twelve-day battle that barred Long Island University-Brooklyn faculty from campus without pay or health insurance. Faculty and students protested every day since the lockout began, rallying against what they deemed to be unfair wages for faculty and unqualified replacement teachers for students.

But a new contract is not in place. A statement from the Long Island University Faculty Federation, an LIU faculty-governed subdivision of American Federation of Teachers union, said a professional mediator will join the talks and the contracts will be extended another school year. A contract extension was proposed earlier, but not for this length of time.

It’s been widely reported the replacement teachers were grossly unqualified. According to students, a dean with a biology background (David Cohen) was scheduled to cover ballet, a janitor was scheduled to handle psychology, and a graduate English student was asked to teach the class she’s currently enrolled in.

Before the lockout ended, Kiyonda Hester, 28, a second year social work graduate student, said, the replacement teachers were not qualified and had heavy teaching loads.

“In my Forensic Science Social Welfare class, the replacement said he’s not qualified to teach this and he has to cover 15 classes.” she said, “I have a three day a week internship, plus five classes. There is no time left for me to work so I’m living off loans. I’ll lose my loans if I withdraw.”

The administration claimed the replacement faculty was vetted just as they vet their regular faculty.

This unprecedented move from LIU-Brooklyn President Kimberly R. Cline came after contract renegotiations stalled in the summer. The faculty’s biggest demand was to be given the same minimum pay as their counterparts at LIU’s C.W. Post campus. In their contracts lasting from September 1, 2011 – September 1, 2015, the minimum salary a full professor could earn at C.W. Post was $96,077, $84,557 minimum for an associate professor, and $76,971 for an assistant professor. At LIU-Brooklyn, those numbers are $80,544, $70,882 and $64,458, respectively.

Tuition is the same at both campuses and student body size is very similar.

“LIU C.W. Post and LIU-Brooklyn operate under different teachers’ unions,” said Jennifer Solomon, an LIU administration spokesperson. “Those unions allocate their funds in different ways. The LIU-Brooklyn union allocates more funds to benefits and less to salary – which we’ve advised them against – than the C. W. Post union, so minimum salaries are different.”

“That’s false,” said Emily Drabinski, Assistant Professor and Coordinator of Library Instruction, and Secretary of the LIU Faculty Federation.  “We don’t know the total wages at the Post campus because the administration’s been stone-walling us about salary data. We have an ongoing arbitration about this. According to the documentation we do have, faculty are hired at the minimum rate here but aren’t at Post.”

Echoing a statement made by Gale Stevens Haynes, the university’s VP and counsel, Solomon said the lockout was a necessary pre-emptive move because she alleged the faculty have gone on strike five out of the last six contract renegotiations. She said if the lock out didn’t happen and the faculty went on strike again, the administration wouldn’t have been ready with replacement teachers.

The LIUFF website provides a detailed history of its actions, dating back to 1967. It lists a wage strike in September 2011, a strike to preserve health insurance in 2003, a wage strike in 1994, and three strikes between 1979-1985. The earlier strikes were over tenure and wage parity with the C.W. Post campus, which they won. Parity was permanently enshrined in the faculty’s contract. According to this timeline, the LIU-Brooklyn faculty has not gone on strike five out of the last six contract renegotiations, and multiple professors also denied this claim.

Any witness to the daily student and teacher protests during the lockout likely heard the chant “Dr. Cline must resign!” Cline took office in 2013 when, as the Village Voice reports, the university was in $122 million in long-term debt. Formerly the CFO of the State University of New York system, Cline slashed the budget in a variety of areas when she took office at LIU, cutting more than thirty non-unionized staff members and not signing contracts with any of the four unions at the university. 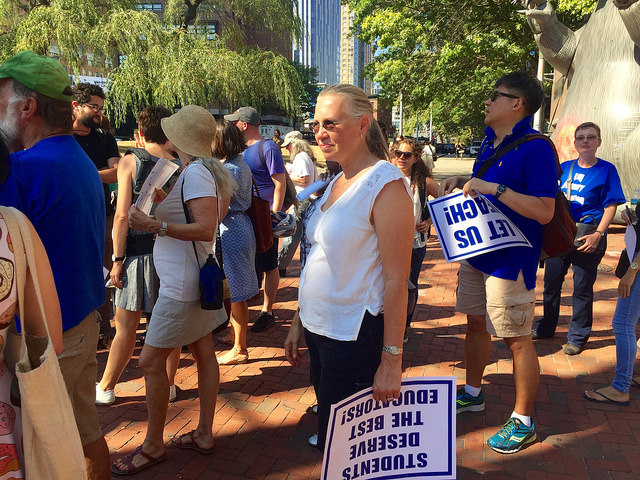 Rebecca States, professor of Physical Therapy and President of the Faculty Senate protested outside the campus gates on Wednesday. Her and her fellow 400 faculty members were not allowed inside. Photo by Eli Kurland

Some faculty feel Cline is trying to – as another cost savings measure – change the marketplace for what a teacher is worth at LIU-Brooklyn. “When they made the decision to do a lockout, they said, ‘You don’t matter. We can replace you. You aren’t important to the functioning of the university,’” said Rebecca States, Professor of Physical Therapy and President of the Faculty Senate. “There’s a nationwide trend of corporate values infusing into higher education.”

If the next cost-saving measure is changing the marketplace for what a teacher is worth at LIU-Brooklyn, what stands in Cline’s way is unions – which is what makes her lockout a tricky coin-toss for power.

“We’ve seen aggressive tactics that used to be considered ‘too far’ become normalized, which contributed to weakening unions in other industries,” said NYU Law professor, Cynthia Estlund, a leading scholar of labor and employment law. “It’s meant to cause the union to back down. It’s meant to take away advantages the union might have in terms of timing of a work stoppage, partly by allowing the employer to prepare and minimize disruption. And it definitely raises the risk to workers of bargaining hard and threatening a strike.”

She said there was a lot of criticism towards LIU senior leadership here, but if the contract deal the administration reaches is ultimately seen as successful, it could encourage other higher education administrations to use the same tactics.