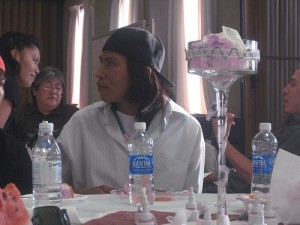 Aubrey Smith, dressed in a backward cap and a button-up T-shirt, sits back at a Navajo wedding. Photo by Lauren Gerber

April Tulley and her brother Shelby are playing the popular Playstation video game “Guitar Hero” in their guest room, arguing over which song to choose next. April has mastered the guitar, and Shelby is equally expert on the drums.

But when their grandmother comes in, they quickly stand up and hug her, greeting her in their native Navajo language.

Outside, their father Julius is cooking mutton on the grill. It’s his son Skyler’s wedding reception. But five chickens cluck away in a cage nearby, in case he wants to use them next time.

Navajo Nation, a 27,000-square-mile reservation spanning four Southwestern states that is home to 174,000 Diné (or Navajo) people, is suffering an identity crisis. The older generation yearns to hold onto authentic culture, but they struggle to instill that nostalgia in their children, who are more interested in MTV and video games.

“We are walking in two worlds,” said Marilyn Dempsey, a teacher at Oxilna’oodilii, a Navajo school in Oaks Spring, Ariz. “The family used to be self-sufficient, but now, parents have to drive to Albuquerque to work. The TV’s a babysitter. The kids want to emulate the people on TV and music. We have lost elders — the traditional, grassroot people. They know what being a Diné means.”

The Navajo’s self-sufficiency has been challenged time and again. In 1860, the U.S. Army attempted to relocate Navajo groups from eastern Arizona and western New Mexico to Fort Sumner in southeastern New Mexico. They were held prisoner there but eventually were released when the experiment, now known as the Long Walk, was deemed a failure.

During the “boarding school era,” during the ’30s, ’40s and ’50s, young children were sent to U.S. government boarding schools, where they studied in English language schools and were disconnected from their culture, often losing their Navajo language in the process. Now, many have blended in to the mainstream — speaking mostly in English, staying in tune with pop culture and seldom waking up for pre-sunrise prayer.

“This is the culture we have to survive in,” Dempsey said. “We need to be educated and understand the white man’s way and what they want us to do. We have to.”

At Skyler Tulley’s wedding, the bride and groom ate “grasshopper” fruit salad; green chili, an authentic spicy dish; and Green River watermelon, which Skyler’s mother Virginia said is the best in Arizona. They mingled as comfortably with their own grandparents, aunts and uncles, as with Mormon missionary guests, wearing Church of Latter Day Saints name tags. Skyler’s uncle gave a speech about the importance of his tribe, followed by a Lady Gaga song.

The older attendees sat at their tables quietly looking on.

“Are the kids Westernized? Look at them. Look at how they’re dressed,” said Skyler’s aunt, Sandra Help, of Rock Springs, N.M. “If they weren’t, they would not look like that. Even me, I am westernized, except for my jewelry.”

“It all depends on parents, what they taught them,” Help continued. “I think it will be like this (a mix of traditional and Westernized culture) for a long, long time.”

Life has changed beyond denim choice and hairstyle. Many young Diné people bypass morning prayers, like offering white-ground corn to Mother Earth, for sleeping in. They eat at fast-food restaurants instead of preparing traditional meals such as mutton and grilled cactus. As Help explained, her children speak in Navajo when it’s convenient, like when they’re at a store and don’t want others to understand what they’re saying. But for her, growing up Navajo looked a lot different.

“We herded sheep, took care of livestock. We didn’t have propane. We would boil beans and cook livestock on charcoal,” she said. “Now, everyone has propane. Everyone has electric stoves.”

It’s hard to say what has caused this cultural shift.

Dempsey thinks parents who lived through the boarding school era don’t want their children to feel as uncomfortable as they did. Navajo adults say they felt dislocated with English as their second language, and many say they were abused, physically and mentally, in the schools. And Help thinks it takes a lot of energy for parents to keep up these traditions. Sometimes, she says, it’s just easier for them not to. The young people look at it more simply.

“Tradition is different now than it was,” said Aubrey Smith, a 21-year-old student at University of New Mexico.

“It’s changing, and it always will. You can either fight it, or you can go with it.”

While picking pinons, or pine nuts, April explained her theory: “I think it’s because of the people that we are losing our culture, not because of the government Westernizing us. The people are choosing to change.”

She shrugged her shoulders and bit into a pinon.

“But it’s upsetting. It’s frustrating that I can’t speak my own language,” she said.

Interesting blog, as an expat Brit, now living in Argentina, this was especially interesting.

Well said! If I could write like this I would be well pleased. The more I see articles of such quality as this (which is rare), the more I think there might be a future for the Web. Keep on keeping on 🙂

I am Navajo and I could not agree more. Everything we do, as Native Americans, has been completely assimilated and “meshed” into our culture. I grew up in a traditional home; Navajo was my first language, I still have long hair(cannot cut it in respects to my maternal and paternal grandmother), used to pray to the east every morning, I wore moccasins to school everyday, and we were barely hooked up with electricity when I was fourteen years old (I am twenty-one years old). The old ways still live through some of the youth, but many are losing it to what they see on Television.