The Forgotten Navajo: Without the basics 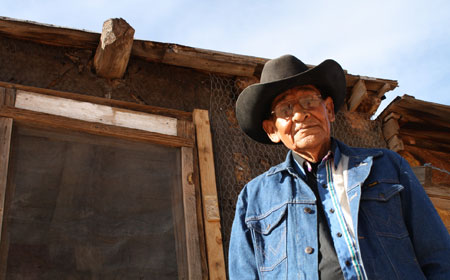 Harry Shorty outside his home. (Photo by Darren Tobia)

Harry Shorty outside his home. Photo by Darren Tobia

Dressed head-to-toe in dark blue denim and black cowboy boots, topped off with a black cowboy hat, he pointed out the new floorboard that covered the hole where snakes and scorpions once slithered inside.

Thanks to housing activists Dwayne Jordan and Jesse Begay, he has a new ceiling that no longer leaks. The house is just large enough for a tiny stove, a twin-sized bed and a small, old-fashioned wood-burning stove.

Every inch of the space — the walls, ceiling and floor — is covered in personal possessions. A kerosene lamp sat on a dresser, which is crammed into the space at the foot of his bed; a bath towel and washcloth hang from a clothesline strung from a ceiling barely 6-feet tall; a fly swatter rests by the door, above a “Welcome” map covered in desert dust.

But winter is coming soon, with temperatures expected to fall well below zero and snowfall likely to pile up several feet at a time. And a few weeks ago, Shorty received a letter from his local chapter house, denying him government-subsidized weatherization. The reason, he said, is because the Navajo Housing Authority is building him a new home, which is good news, except he’s heard that same promise every year for the past 42 years.

“I’ve lost count of how many times I’ve been given the run-around,” Shorty said in Navajo, translated by Navajo guide Jesse Begay. “They’ve been here so many times, measuring this, measuring that.” 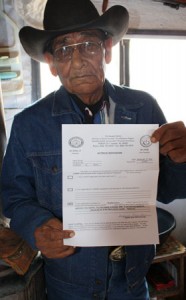 Harry Shorty holds up the letter from his local chapter house denying him government-subsidized weatherization.

Across the Navajo Nation, thousands of people live like Shorty, in 20,000 substandard homes that lack basic utilities such as plumbing, electricity or weatherization.

Christina Navajo has lived in a single-room house with her husband and four children for two and a half years. Their one room serves as the kitchen, dining room, living room and bedroom.

Still, the one room is an improvement over what they once had. 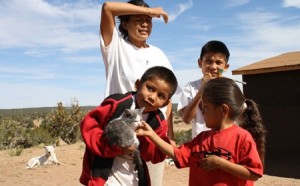 Christina Navajo and three of her children outside their home. Photo by Darren Tobia

“Before, we didn’t have a roof. The kids were cold, and I didn’t have enough blankets,” she said. “I just had to go out there and do my best to get wood.”

Barbara Begay faced a similar situation. She lived in tents and in a shade, a small shack made of wood, for months with her five children. They, too, had no electricity or running water.

But instead of waiting for government help that might never arrive, Begay decided to build her own home from the ground up.

“We knew we were going to be in need of building a home, so we started buying cinder blocks and that was eventually enough to start a foundation,” she said.

Begay’s teenage sons learned how to build a home on the Internet, logging on from school and searching the Web whenever they could.

“We started trying to figure out what size house we’re going to do, and we just went from there,” Begay said. 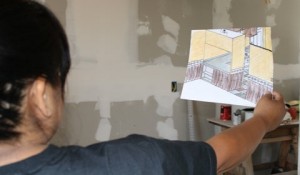 Barbara Begay holds up a sketch of her vision for her family’s kitchen. Photo by Darren Tobia

Begay and her children, however, were forced to sacrifice what they wanted for what they needed.

“I had my two older boys help me. They really wanted to go off to college but I kept telling them, ‘You know what? This is our focus. This is our necessity,’ ” she said. “So far, we’ve got a three-bedroom home. The wiring is done. The plumbing is in. We have running water and some minor touchups.”

For the Begay family, their sacrifices are paying off: They now have a home.

Most, however, aren’t as resourceful, especially the older generations, who are left to fend for themselves. Mary Alice Begay’s uncle, Roger, 72, froze to death in his shack in January while waiting for housing the Navajo Housing Authority promised him. Like Shorty, Roger lived in a one-room shack for years, surrounded by desert vistas and dirt roads. The NHA promised him building materials for a news home, but all he ever saw was one stack of trusses, delivered to his home and left under a tree in his yard.

Eventually, the roof of his shack caved in, and Roger was forced to move to an even smaller home. His new dwelling was made from the roof of a trailer, just big enough for a bed, with no winterization or even a wood-burning stove. 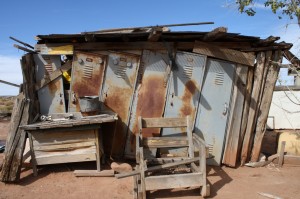 Roger was forced to move from this shack after the roof caved in. Photo by Darragh Worland

Many such as Shorty and Christina Navajo feel the NHA has failed to adequately address the housing crisis on the reservation. Substandard housing conditions are just a way of life there. The millions of dollars in Native American Housing and Self-Determination Act funds the NHA receive each year from the federal government through the department of Housing and Urban Development have had little to no impact on their lives.

According to the NHA’s own budget reports, the organization averaged about $85 million each year in funding from 1999 to 2008, but over the past 10 years, NHA has consistently fallen short of their own housing goals. Last year, NHA planned to construct 56 new rental homes. According to the NHA’s annual report, not a single new home has been built.

In Ship Rock, N.M., a remote Navajo community, an entire housing complex has been abandoned since it was constructed in 2004. The homes were near completion, but they were never certified for occupancy. As many as 3,000 homes, many of which have already been wired for electricity, with pipes for plumbing and ducts for heating, stand empty and vandalized. 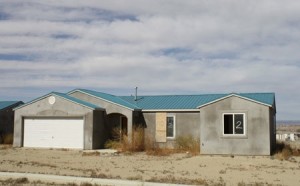 “When you ask yourself how is it possible that the federal government has spent billions of dollars on Navajo housing and yet Navajos still live in squalor, this is one of the answers to that question,” said David Jordan, a lawyer who has brought cases against the NHA. “The problem of mismanagement in construction projects and abandoning projects before they’re complete shows where the money is being spent, but there’s no benefit being gained.”

Patrick Sandoval, the chief of staff for the president and vice president of Navajo Nation, said housing policies are stringent, which slows down the process.

“Not saying it’s right,” he said. “We need to work to make rules less stringent. We are doing the best that we can, but there is more that can be done.”

What an interesting and uplifting show of determination and insight and hard work and talent on the part of the entire team.

It saddens me there are still these conditions. I am proud of these young ones that have taken some initiative for the people

Glad I found this site lots of information for me to use thanks again. 🙂

The author of sperling.com has written an excellent article. You have made your point and there is not much to argue about. It is like the following universal truth that you can not argue with: Nothing works faster than a geek with a challenge Thanks for the info.

Many thnks for writing such a fascinating post. All too often you see the same thing over and over so this makes a refreshing change.

this is a really good resource for educators. thanks for sharing.

great forum lots of lovely people just what i need

hopefully this is just what im looking for looks like i have a lot to read.

I always enjoy reading quality articles by an individual who is definately up to snuff on their chosen subject. I’ll be following this thread with much interest. Keep up the good work, till next time