The “Greatest Show & Tell on Earth” comes to Queens 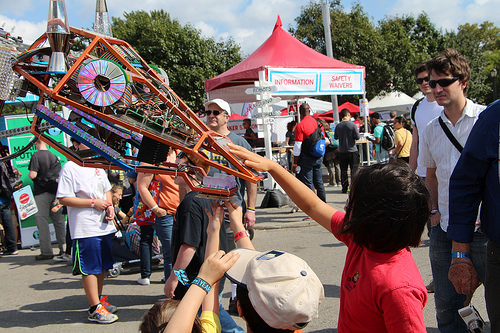 Children play with an enormous robot-giraffe at the fair. Photo by Maria Panskaya

Children play with an enormous robot-giraffe at the fair. Photo by Maria Panskaya

The 5th Annual World Maker Faire took place in New York Hall of Science, Queens, yesterday, where technology and science experts, as well as ambitious startups, gathered to share their ideas and inventions.

The fair brought together more than a hundred inventive makers from across the county. It’s main focus was to educate kids about technological innovations, inspire them to create new things and to motivate the new generation to be curious about the world around them and beyond.

One of the ways the fair engaged children, and anybody who was curious enough, was a NASA Solve challenge. Dr. David Miller, NASA chief technologist, spoke about overcoming space challenges by involving society into the NASA’s creative process.

“Our vision is to reach for new heights and reveal the unknown, so that what we do and learn will benefit all humankind,” Dr. Miller said. “If you have an idea that can improve our satellites’ or modules’ functioning, we want you to participate. You are the future and we want your ideas.”

Dr. Miller didn’t forget to mention that the most creative idea would be rewarded with a $20,000 check.

“If you are interested in space exploration, or want to learn more about Mars or other planets, or simply interested in overcoming challenges, then you bring us an idea and we bring the check,” Dr. Miller said.

While NASA Solve challenged middle and high school students, there were other pavilions, workshops and DIYs, like Maker Camp, for younger kids. Children got to take various techno parts apart, like keyboards and radios, with pliers and screwdrivers, creating sculptures or pictures out of those recycled pieces.

“One of my friends is a fan of electronics and robots and I got my interest form him,” said Ellis Retzer, 6, while tediously hot-gluing a keyboard key to his sculpture. “I love building new things after I’ve taken them apart.”

Children like Ellis spent hours uncovering the unknown parts of computers, printers and other techno stuff, while others preferred to hang around the two enormous space rockets installed in the middle of the fair or to pet a five-feet high electronic giraffe. 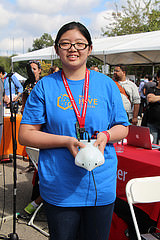 “A Finch can be your pet and an educational toy at the same time,” said Vanessa Leung, 13. Photo by Maria Panskaya

Vanessa Leung, 13, came to the fair not only to see what other makers had invented but also to present her own invention. Leung, together with several classmates from Simon Baruch Middle School, had built and programmed a Finch, a small electronic pet.

“It can measure the temperature in the room or it can play with you cat,” Leung said. “Finch is a really good tool for beginners to use to pick up on computer programming, since you have to navigate it from your laptop, and it’s fun to play with.”

Matt Trossen, CEO of Trossen Robotics, had also presented his high-performance Jimmy Research Humanoid. A 27-inch robot, which was also available in different designs and colors, would hit the market at the end of the year, presenting interested educators with a functioning high-level robotic platform to develop research on.

“We would love school and college students to have these robots and explore them,” Trossen said. “It would give students a chance to understand robotics without having a high level of education or knowledge in this area.”

The price range for Trossen’s robots would vary from $1,600 to $16,000, depending on the endoskeleton’s structure, computer programming and robot’s build-in features. 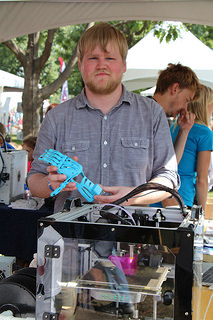 A 3D printer is making a prosthetic hand made of thin plastic, similar to the blue one Ryan Brandy holds. Plastic prosthetics are more affordable than bio-prosthetic limbs. Photo by Maria Panskaya

The majority of exhibitions on the fair had aimed for children’s educational needs and development, but e-NABLE had different goals. e-NABLE is the global network, which uses a 3D printer for prosthetic hand production for children.

With so many more exhibitions and pavilions to explore, the fair dubbed “The Greatest Show & Tell on Earth”, will be open again today for curios children, educators and anybody who likes to explore the techno world.