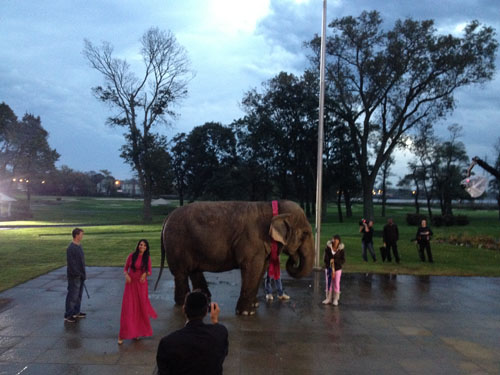 The 22-year-old arrived at her dinner party in a floor-length magenta gown followed by her date, a full-grown elephant with a matching pink sash draped around its massive neck. This is not the typical entrance of someone running for New York State Senate, but for Republican Candidate Mindy Meyer the spectacle is hardly out of character. The dinner party, Meyer’s first official fundraiser, was the latest chapter in the young woman’s bizarre campaign.

Meyer began garnering media attention when her hot pink campaign webpage launched in July 2012 boasting the slogan, “I’m Senator and I Know It.” Since then, Meyer has faced a tongue lashing from the media. The New York Post dubbed Meyer the “Magenta Yenta,” while Salon called her “A troll we can all believe in.” Never one to shy away from the camera, Meyer’s October 15 fundraiser at the Inwood Country Club doubled as an episode for Chef Roble’s Bravo reality television show, Chef Roble & Co.

Meyer grew up with her four siblings in an Orthodox Jewish home in Flatbush. She graduated from Touro College and is currently pursuing a law degree there.

While attending school, the raven-haired Meyer also seeks to usurp the state senate seat of Kevin Parker, a man who has lived in Brooklyn longer than Meyer has been alive.

At her fundraiser Meyer told supporters, “Not only am I the real deal I am the only choice.” Her key issues are reducing red tape to help small businesses and increasing services offered to women facing unwanted pregnancies. Meyer also has some harsh words regarding her opponent, Parker, who has a history of anger management problems. “Do you want a State Senator who attends law classes or anger management classes?” Meyer says.

Meyer seeks to engage a younger generation in politics, which may explain her flashy website. She has succeeded in educating at least one young Flatbush resident, her sister. “I learned what a senator does,” says 21-year-old Miriam Meyer. “I didn’t realize what a big deal it was!”

The reality television cameras and abundance of pink décor at the function may cause some to question the sincerity of Meyer’s campaign, but her support group of family and friends are confident in the young candidate. “There’s a big possibility that she will win,” says Meyer’s longtime friend, 23-year-old Rechama Jaffa. “What has Kevin Parker done? He’s been in office for ten years.”

Despite the enthusiasm of Meyer’s friends and family, the limited turnout at the fundraiser—about 20 people–coupled with Parker’s re-election record makes Meyer’s success in her bid for senate unlikely.

Meyer’s chances of winning may be slim, but her enthusiasm has not wavered. A smile was permanently plastered on her face as she nibbled on Chef Roble’s kosher cuisine and chatted with journalists from The New York Post and Gawker, who were there to report on the spectacle. Even if she does not walk away a state senator, Meyer may get a consolation prize; Bravo has been approached with a reality show that focuses exclusively on her.