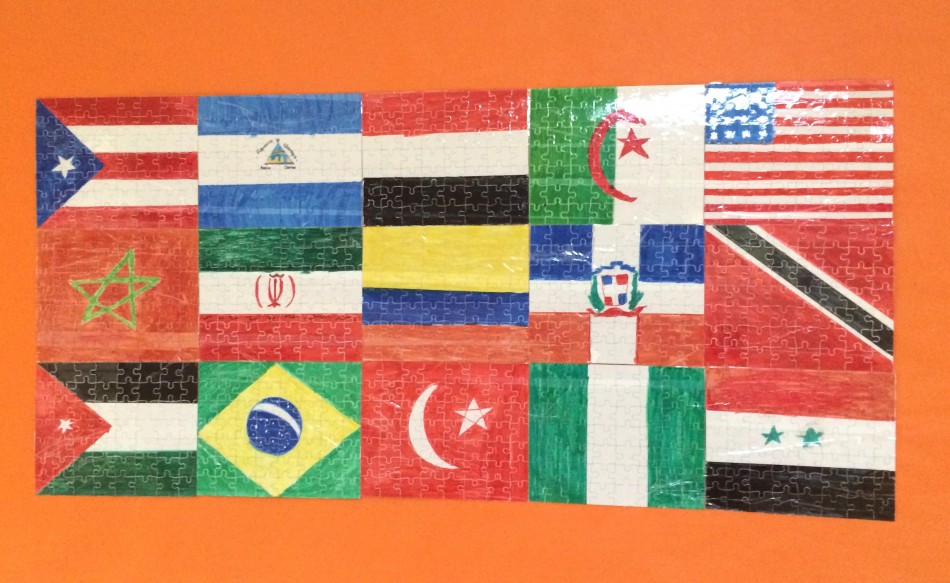 The Razi School is decorated with photos from around the world to celebrate International Day. Photo credit: Nicole Schubert

As bombs of bigotry erupt in the Middle East, some fear that tolerance will never be restored.

But imagine a school where Muslim first grade boys sit at their desks coloring in pictures of a Rabbi, a Muslim man and woman, and a Christian boy below the words: “In Islam, everyone is equal.”

“The students learn the difference between Islam, Judaism, and Christianity and that everyone is your neighbor no matter what religion they are,” said Denise Frazier, 40, a parent of a first grade girl at the Razi School in Woodside, Queens. “They teach them that they can have friends that are Christians and Jews, that they are all the same, and all equal.”

The Razi School, a Muslim pre-kindergarten through 12th grade private school, encourages its students to learn the different religions of the world.

Recently, the students participated in International Day, where they celebrated cultural diversity and the many nationalities that are represented at the school.

“International Day is a celebration of people from all walks of life to teach equality and tolerance for one another no matter where they come from or what religion they are, “ said Frazier. “It amazed me that there were 32 different countries represented in a school with 300 students.”

According to Frazier, the students were able to experience the different cultures through food. With their sense of smell and taste, they could immerse themselves onto the streets in Egypt, the food markets in Tanzania, and the sidewalk cafes in the United States. The aroma of koushari lentils and rice, chapatti flat bread, and apple pie cobbler brought the students closer together.

But International Day is not the only way the Razi School addresses tolerance. The students are also required to take religion class.

“You are going to be good guys,” said Sheileh Wessam, the first grade religion teacher at the Razi School, to his 15 students. “Look guys, you have to respect your friends and help other people.”

Wessam’s first grade students read out loud their lesson of the day, a story about Prophet Musa (or Moses in the Hebrew Bible). At the end of the lesson, the students were instructed to color images that represented different religions.

But not all schools are this dedicated to cultivating an environment that teaches tolerance.

According to Teaching Tolerance magazine, religion class is not a requirement in most schools.

“We have a crap structure in teaching religion in this country,” said Adrienne van der Valk, managing editor of Teaching Tolerance magazine. “When students have the opportunity to interact with other students who practice religious beliefs that are different from their own, their fear goes down and their understanding goes up. But it’s not mandatory.”

Van der Valk encourages teachers to allow their students to see themselves and others who are not like them in their work.

“It is much more difficult to label a stereotype if you have regular contact with that group,” said van der Valk. “This can occur by watching movies or reading books about that group. We encourage teachers to do this.”

According to the Southern Poverty Law Center (SPLC), the future of achieving equality and justice lies in the hands of educators.

When schools do not require a curriculum that fosters tolerance, students are more vulnerable to social injustice and religious prejudice.

Jordana Loft, a masters student in elementary inclusive education at Columbia University, experienced the effects of this vulnerability while substitute teaching at a charter school in the South Bronx.

“I was wearing a red kabbalah bracelet and one of the girls, who was wearing a hijab asked me if I was Jewish,” said Loft. “I said ‘yes, why do you ask?’ She responded asking me that if she’s Muslim and I’m Jewish, does that mean we can’t be friends?”

Loft explained to her student that she grew up in a community where they embrace different cultures, attend difference schools and go to different places of prayer.

“Those differences make people unique and special,” said Loft to her student. “They enhance my life. I get to learn things I didn’t know before.”

Loft told her that when she was away at school her best friend was Muslim. They used to speak about the different places they would pray.

“She immediately got excited,” said Loft. “She was able to see herself in my story. We could now be friends.”