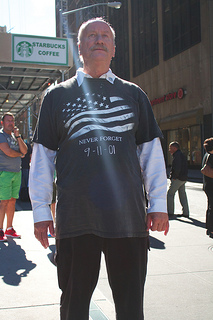 Tyrone McClave of Langhorne, Pa. pays tribute to the victims of the Sept. 11 attacks at New York's 11th anniversary ceremony at Ground Zero. McClave has been to every ceremony since 2002. Photo by Timothy Weisberg

Standing along Church Avenue in Lower Manhattan, Tyrone McClave faced One World Trade Center and looked straight ahead at the unfinished, yet majestic skyscraper, a symbolic 1,776 feet into the sky.

Every year, the Longhorne, Pa. native makes the trek to Ground Zero to honor the victims he did not know personally.

“I’ve been here every year and God willing I will continue to be here,” he said. “I never want to forget the people whose lives tragically were taken, innocent people.”

Yesterday marked the 11th anniversary of the terrorist attacks that killed over 3,000 and changed the New York City landscape forever.

Linda Mula of Whitestone, Queens, carried the picture of Michael J. Cawley, a fireman from Ladder 136 in Elmhurst, Queens. He was killed during the attacks, but Mula never met Cawley. She saw a picture of him that fell to the ground at a party and picked it up. It inspired her to give back to her community, and she now serves as an EMT for a Whitestone ambulance service.

“I had made a promise to myself that when I was strong enough, I was going to pick one person that died and honor that person for the rest of my life, and that’s what I did,” she said.

Mula’s father was also a Hazmat tech for Consolidation Edison Company of New York, and one of the emergency management responders to aid in hazardous materials control when the first tower collapsed. Shortly after the attacks, he suffered a brain tumor, but survived.

“It’s very hard to stand here knowing what happened 11 years ago,” she said.

Marco DeLucia and his daughter, Lauren DeLucia, of North Bergen, N.J., were some of the first volunteers at Ground Zero, helping clean up debris and perform search and rescue missions for the hundreds who were still unaccounted for. 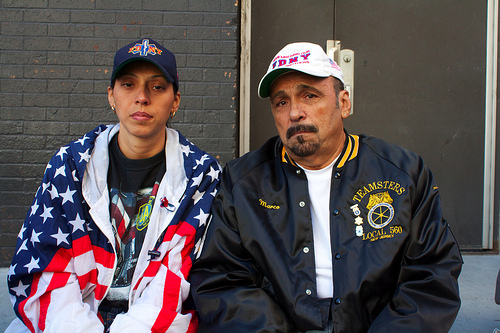 Lauren DeLucia of North Bergen, N.J. sits with her father, Marco, one block away from private ceremonies for families at New York's 11th anniversary ceremony of Sept. 11. DeLucia and her father volunteered for search and rescue and cleanup teams days immediately after the Sept. 11 attacks. Photo by Timothy Weisberg

“The day after (the Sept. 11 attacks), it was so surreal sitting there,” DeLucia said. “You couldn’t see your hand in front of your face.”

DeLucia lost a close friend during the attacks, a member of the Port Authority Police Department who umpired her softball games growing up. And although DeLucia, a nurse practitioner, knew of other acquaintances that were killed, she believed it was not her place to be at the memorial.

“One year I went down and it just felt weird that I wasn’t a family member,” she said. “It just didn’t feel right because it was not direct family.”

The sparse numbers of people in attendance compared to previous years did not faze him.

“If there are only two people, I still want to be here,” he said. “I want to remember the firemen and policeman, the people who gave their lives to try and save us. That affects me. They did it for me as well as everyone else.”