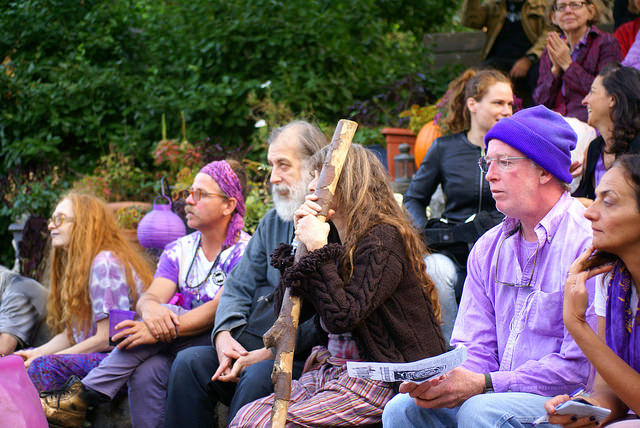 Purple clad mourners assembled in La Plaza Cultural to commemorate the passing of Adam Purple, who died at 84, while biking over Williamsburg Bridge. Photo by Diego Lynch

Mourners convened in La Plaza Cultural, an East Village community park and garden, yesterday afternoon to commemorate the passing of Adam Purple. The audience listened to a series of speakers who celebrated and remembered, Purple, an activist and urban gardener. But something was conspicuously absent.

In the place of the traditional mourning color, purple, the color that Purple wore everyday, reigned as the dominant color in the crowd. Purple, died 11 days ago while cycling over the Williamsburg Bridge. He was 84.

The speakers didn’t just focus on the life of Purple, but on community gardening.

“How many of you are feeling really good in this place?” asked Ray Figueroa, the president of the NYC Community Garden Coalition. After receiving cheers in response, he went on to say “This is the power and the beauty of these oasis that we call community gardens. We have got to recognize that there were folks like Adam Purple, there were folks like Liz Christy, there are folks in the Bronx like Karen Washington, there are folks all over New York City who have struggled and sacrificed for these places.” 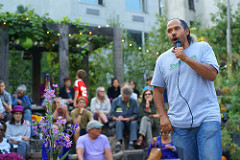 “We need to stay vigilant sisters and brothers, why? Because we have a so called progressive administration, and in the name of affordable housing it is going after community gardens,” said Figueroa, calling out the administration of, current New York Mayor, Bill De Blasio.

De Blasio’s administration has a NextGeneration NYCHA (New York City Housing Authority) plan for the addition of 10,000 units of low income housing among other goals. According to public statements from the mayor, 17 community gardens are being considered as sites to meet demand for open space needed for the new housing.

And this isn’t the first time that housing and community gardens have been at odds.

Purple was the progenitor of the Garden of Eden, a former community garden in the Lower East Side which Purple built by hand in the 1970s. This garden was torn down in 1986 to make way for low-income housing, destroying more than a decade of Purple’s work.

“I saw him standing, staring at the last tree,” said George Bliss, 62, while describing the response of Purple the morning after the Garden of Eden was bulldozed.

In their advocacy, the speakers bemoaned the dismantling of the Boardwalk Community Garden in Coney Island to make way for expanded housing.

It was a functioning garden and then the city sold it to iStar for a ampitheater, and the garden and community were devastated” said Magali Regis, a member of the NYC Community Gardening Coalition. “They came in the middle of the night in the dead of winter.”

Some people were there just to remember a friend. 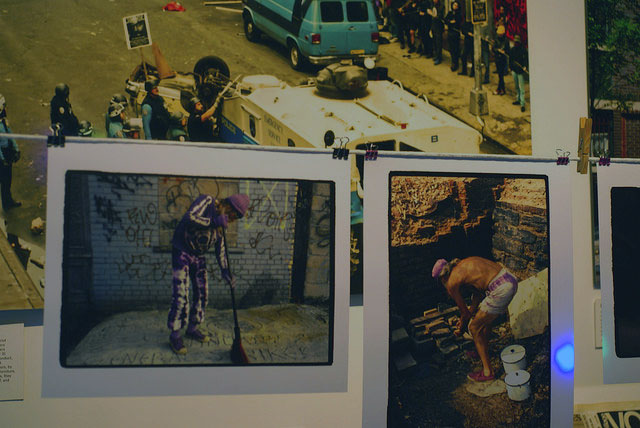 “I met him at 184 Forsyth, where he lived, where the garden was built, he comes out with this long beard, the sun was shining, and I though this is great,” said Maria Batas, 35, describing the first time she saw him. “He was squatting, all the tenants had moved out, he was living there alone.”

But calls to action loomed large over the proceedings. Paula Segal, executive director of 596 Acres, an advocacy group for land access, said people need to show up to courtrooms where community gardening cases are being heard.

“We need you to show up in those little windowless rooms, where decisions about places like this are actually being made,” she said.

People like Mr. Purple need to recognised and remembered all over the world. Our little havens of peace and productivity should be an example to all. Shine on Mr. Purple.