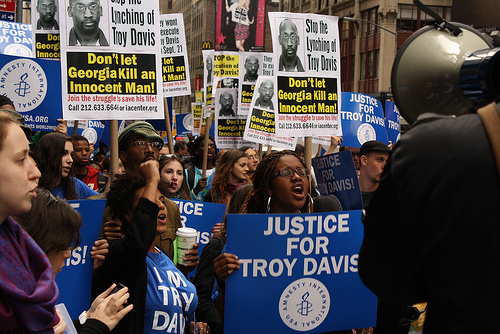 Hundreds of protestors rallied for Georgia death row inmate, Troy Davis, who is scheduled to be executed on Wednesday. Photo by Eric Zerkel.

It has been nearly 20 years since his conviction for the 1991 murder of off-duty Savannah, Ga., police officer Mark MacPhail in 1989. If carried out as planned, Davis’ execution would take place next Wednesday, his fourth scheduled execution in four years. The fight to save Davis has gone global with rallies and social media campaigns launched to stop the execution.

But Davis’ conviction has come under recent fire. With a lack of physical evidence, Davis’ conviction rested on the testimony of nine witnesses, seven of whom have recanted or altered their testimony, some even doing so under sworn affidavits.

With so much controversy swirling around the case, protestor Ferix Navarro, 22, of the Bronx, insisted that the protests were needed in order to put political pressure on the key decision makers in the Davis case. 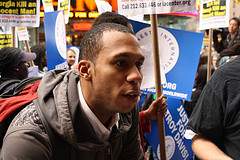 Ferix Navarro, 22, of the Bronx, is fighting to save Georgia death row inmate, Troy Davis. Photo by Eric Zerkel

With the Georgia Board of Pardons and Paroles set to hear the case for possibly the last time on Monday, protestor Muriel Tellinghast of Brooklyn remained hopeful that the protests would have an impact on the board’s decision. 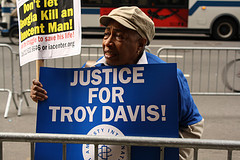 “I don’t know what it takes to move the board of pardons and paroles,” Tellinghast said. “We’re asking for them to reach inside of themselves and try to find the basis of American justice. To prove that justice does exist and does prevail in the state of Georgia, and they are willing to at least give a new trial.”

Crowds gathered to observe the large group of protestors as they attempted to increase awareness of Davis’ case.

King Tuck, 27, of Brooklyn, watched the protests from across 7th Avenue. He said the protestors made him more aware of Davis’ case.

“I feel good that people are coming together to save a life,” Tuck said. “Whether a man was wrong or right, I feel life is more important than death. There is a better way to do something to somebody than killing them. You can’t penalize a man for murder by killing him. Two wrongs don’t make a right.”

The protests were sponsored by Amnesty International, which has been following the Davis case since it began, and according to CNN, has collected over 663,000 signatures on a petition opposing the death penalty for Davis.

Caesar Taylor, 30, another bystander from Brookyln said after listening to the protests he was skeptical about Davis’ case.

“There is some funky business going on down there,” Taylor said. “Many innocent people are in jail, not everyone in jail is guilty.”

Our system is established to make sure the innocent are not convicted. To garauntee the innocent are not convicted we allow the guilty to sometimes go free. (i.e. O.J. Simpson, Kayce Anthony). It’s not a perfect system, but it is the best system in the history of the world. It is hard for the common man to understand the reasoning behind this system, but for those of us who work within it, we realize that justice is not blind. The scales of justice are not balanced. The system is weighed in favor of the guilty to allow the innocent to go free. Officer MacPhail understood this and gave his life to defend it.

When a man is convicted his guilt is highly likely. No man will ever be sure. Anything is possible. But the system has given Mr. Davis every opprotunity and the system convicted him. No one man convicted him, but e…veryone who believes in the values of this country convicted Mr. Davis. And for this he will pay the ultimate price with his life. Just like this young officer who was working an extra job just to make a living for his young family. Where were the protesters then? Had they stood up for better pay and better treatment of their police officers this would have never occurred, because Officer MacPhail would not have been working “off-duty” to support his family, and his path would have not crossed with Troy Davis.

The protestors who defend Mr. Davis now, are the only ones guilty of failure, because had they been civily active earlier, in support of the very system they now oppose, the death of Officer MacPhail would not have occurred, and Mr. Davis would have never faced the grim reality of the dead penalty.

God Bless the family of Officer Mark MacPhail, may you find peace. May God have mercy on Troy Davis. Let the sentence be carried out, and know that there is no justice that man can deliver, only the resemblence of a justice that God will one day hand down on all men.