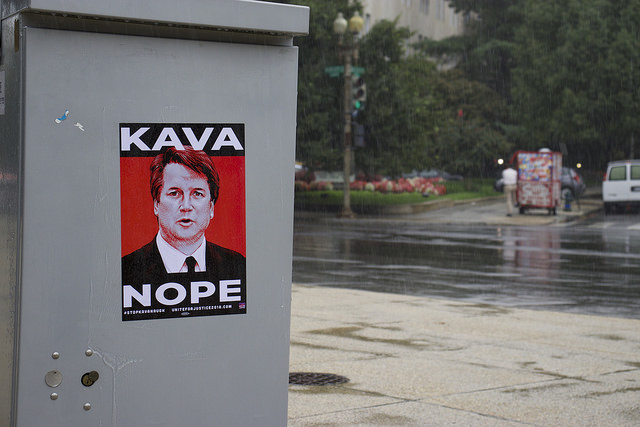 Nearly 30 years ago, a teenager was sexually assaulted and had her life changed forever as she left her high school’s halls with traumatic humiliation and guilt. While this is the story that remains only an allegation of Dr. Christine Blasey Ford, countless women share an eerily similar tale that they are forced to relive as they watch her alleged perpetrator seek a spot on the Supreme Court.

Ford accused Supreme Court nominee Brett Kavanaugh, a judge on the U.S. Court of Appeals, of sexually assaulting her while they were in high school. With an experience that mirrors Ford’s alleged assault all too well, Christine McCoy has dedicated the past week to voice her opposition against Kavanaugh’s nomination. Like many women, the details of her assault will never leave her mind or body’s memory.

“My experience was pretty much the same,” she said, surrounded by some of her closest friends and neighbors while relaxing in a Pret A Manger after protesting in Washington, D.C. “You put stuff behind you but when things like this come into the public, I burst into tears the other day just thinking that I was never able to get any closure.”

The Rape, Abuse and Incest National Network (RAINN) reports that every year, nearly 400,000 children and adults are victims of sexual assault. As rampant as the issue is, only a handful – about six in 1,000 – perpetrators are sentenced to prison.

“(Ford) represents so many survivors like Christine (McCoy) who never got the opportunity to share their story, to be believed, to not be ashamed,” said McCoy’s friend Anne Seymour, a national crime victim advocate. “There are so many indignities that women have suffered and in my work it’s on a minute-by-minute basis.”

“I’m enraged and I can’t believe this is happening in 2018 and that we’re survivor-splaining,” she added. “We should not have to do this.”

Page Croyder, 62, knows the systematic oppression these women have faced all too well. Before taking to the streets of Washington, D.C., with a sign reading only ‘hunger strike’ to protest Kavanaugh’s nomination and to stand in solidarity with Ford, Croyder was a Baltimore prosecutor who dealt with sex and child abuse cases. The cases she worked on and the work environments she witnessed as a woman in in a man’s world of law, have made her an outspoken advocate for women’s and victim’s rights.

“I can’t speak for young women now, but in my day, we very much eternalized the expectations of women,” she said, standing on the corner of Constitution Avenue and First Street. “When you’re victimized, that situation already puts you in a loss of power. So whether the person is about to sit on the Supreme Court or whether it’s your uncle or your father or whoever it was, seeing them go about their normal life while you are sitting there damaged is constant revictimization.” 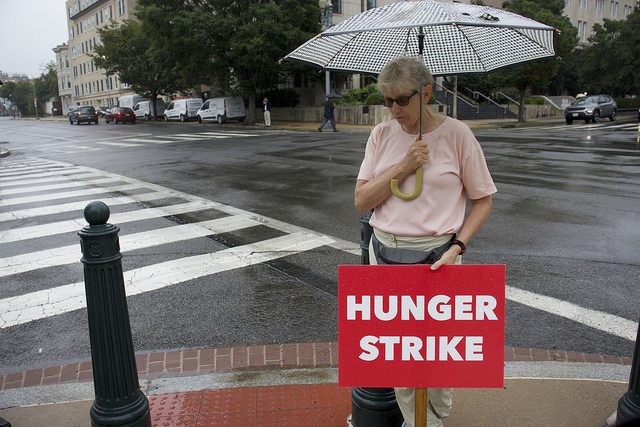 Page Crowder went on a hunger strike in Washington, D.C., to stand in solidarity with Christine Blasey Ford, who accused Judge Kavanaugh of sexually assaulting her in high school. Photo by Li Cohen

Kavanaugh’s potential confirmation as a Supreme Court Justice has enraged thousands of other women like Seymour, who have taken to social media to express their own opinions. Many have shared their own survival stories using #WhyIDidntReport, #CancelKavanaugh and #MeToo. Many who haven’t shared their stories have loved ones taking a stand on their behalf.

“I know people that have (been assaulted) and I know ladies that still to this day wouldn’t come forward,” said D.C. resident Val Silva-Horva, who was speaking with protesters outside the White House. “This persecutes them all over again. It reminds them of what happened to them and the fact that there is no voice that stands up for them.”

Anisha Singh, senior organizing director for Generation Progress, has helped with several sexual assault court cases. She explained in a phone call that Senate Judiciary Committee members and many other government officials are not formally trained in dealing with sexual assault victims, as evident in the Clarence Thomas and Anita Hill case in 1991.

“What ends up happening in these situations – and we saw it happen with the Clarence Thomas case – is that Anita Hill was attacked,” she said.“The people sitting on the Senate Judiciary Committee didn’t let her talk, they didn’t really listen to her and weren’t respectful toward her. That process was so bad toward the survivor, and yet this one feels like it’s going to be so much worse.”

Although Silva-Hora, Seymour, McCoy and Ford have all come forward in some way over the past week, Silva-Hora acknowledged that the work they are putting in will not change how society sees victims of sexual assault if Kavanaugh is still confirmed for the Supreme Court.