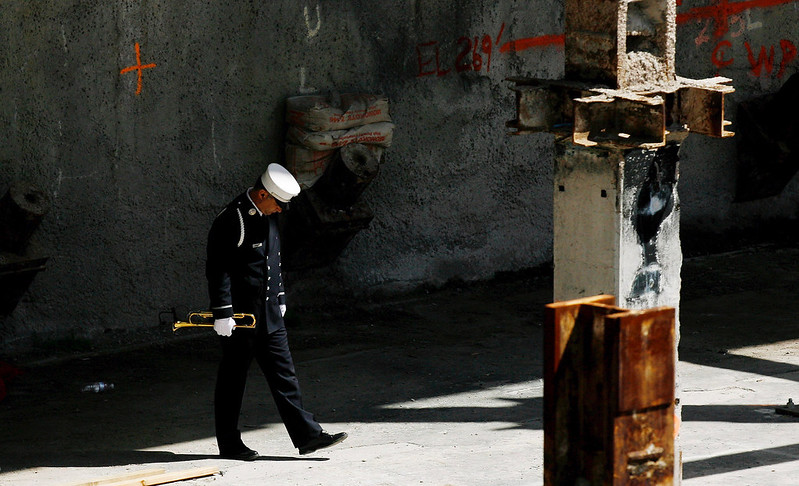 Joe Minogue pictured after playing taps on the 2006 memorial of 9/11. Photo courtesy of the National Fallen Firefighter Foundation.

As a newly trained firefighter, Minogue was taking his first vacation day when he saw Flight 11 crash into the North Tower of the World Trade Center. He grabbed his uniform and told his wife, “I’m going to work. I’m not sure when I’ll be back.”

Minogue watched the towers fall as he drove along Grand Central Parkway. After arriving at the firehouse in Corona, Queens, Minogue was dispatched to Ground Zero. When his company got to the Twin Towers, “Everything just stopped in time. We walked through the glass and we saw the pit. We saw the World Trade Center.”

Minogue said it was like a scene from a movie, with so much ash falling that it was almost black. He noticed how bizarre the rest of his company looked,

“They were just covered, like somebody opened a bag of flour and dropped it on them,” he said.“Their eyelids were caked with it.”

Three days later, Minogue’s role with the fire department changed. With 343 firefighters lost on September 11th, they needed someone to play taps, the 35 second song played by a single trumpet at the end of service member’s funerals.

“So, I would still go to work, then I would go to a funeral to play taps. Sometimes two, sometimes three funerals a day. In the end, it got so busy I was pretty much offline,” Minogue said.

With only one other bugler in the NYFD, Minogue played taps at around 170 9/11 memorial services. Yet, each song was never the same.

“I played it different for everybody, because everybody is unique,” he said.“I think everybody needed a different song. Ya know, for me, it’s a gift that I could give back.”

Minogue kept playing taps as a fire department lieutenant, but in 2006 he developed a cough. At age 46, Minogue developed stage four throat cancer and high-grade bladder cancer from exposure to the 9/11 ash and debris.

“Everything I had done with the ceremonial unit was over, they had to run without me,” he said. The illnesses forced Minogue to retire and leave the fire department.

As of September 2021, over 200 active and retired NYC firefighters have died of illnesses linked to 9/11 according to the Scientific American. Even more have developed cancer and survived, including Minogue, who said it was because of his strong attitude.

“Two doctors, separately, would call me the poster boy,” he said. “My friend Mark and I had radiation burns and our faces were all red, but we were always smiling and laughing.”

On this 20th anniversary of 9/11, Minogue is still playing taps on his trumpet, but said he doesn’t have enough breath to hold the last note. Despite all of his health problems, he said he would still go back and do the same thing again.

“When you’re on this earth, you have to do the best you can for others, without asking anything in return,” he said. “That’s it.”