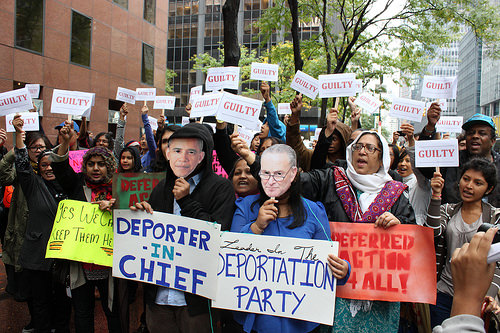 A group of undocumented teens undeterred by the rain, stood on a Midtown Manhattan sidewalk performing a mock trial of President Obama yesterday afternoon.

The issue in question was immigration reform. The concern, that President Obama is delaying a statement on administrative relief until after the midterm election for political gain.

“It’s unfair that Obama has continuously postponed this statement and it’s for his party politics,” said Jensine Raihan of Astoria, Queens. “He is prioritizing the Democratic Party over peoples lives and that’s unfair.”

Raihan, 16, is a youth leader for Desis Rising Up and Moving(DRUM), the group responsible for conceiving the idea for the demonstration. DRUM is a grassroots organization representing the interests of low-income South Asian and Muslim immigrants in New York City.

Their demonstration is part of a week of coordinated action across the country to call for the president to produce a statement. An executive order for administrative relief would postpone deportation for undocumented workers and grant them work permits. 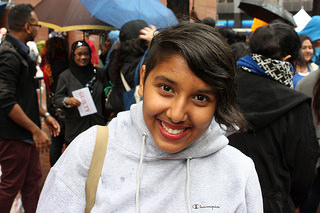 Jensine Raihan, 16 of Astoria Queens, is a youth leader for DRUM who helped organize the demonstration. (Photo Credit: Megan Jamerson)

A group of over 50 people, made up of mostly young adults, attended the 30-minute demonstration in front of New York Sen. Chuck Schumer’s  3rd Avenue office. They believe Schumer, like Obama, has failed to act with expediency on immigration. They wish to be heard by Washington.

“As immigrants we know what’s best for us, we know what our experiences are, we want to share those experiences and we should be the judge of what’s in our favor, in our benefit” said Fahd Ahmed, 34, of Jackson Heights, Queens.

Ahmed is acting executive director for DRUM, and was overseeing the youth leadership demonstration. He said he was pleased with the turnout.

“We are very happy and very excited,” said Ahmed. “I think the visuals of it are very beautiful.”

While the group remained peaceful, respecting the boundaries of the demonstration line set up by the NYPD, they were not quiet. They chanted, and held vibrantly colored signs with various demands. “Deferred action for all” “Administrative relief now” and “People over politics.”

A courtroom scene was set with handmade cardboard podiums and a gavel. Two DRUM members held masks over their faces with the likeness of Obama and Schumer. They stood by as some came forward to testify and tell their stories.

“It’s a struggle every day to survive,” said Subashish Barua, 25 an undocumented native of India. “Working long hours, paying taxes, and not being paid properly, and still getting abused by employers just because I’m undocumented”.

Barua said he endures low wages and poor working conditions out of a dedication to support his family back home. Being the only son of his family, they depend on his income.

If an executive order for administrative relief was granted Barua could qualify for a work permit, which would allow him to be employed under legal conditions, he said. The DRUM youth leaders feel stories like Barua’s are far too common and action needed to be taken.

“Activism is a way of both defending myself and my family and friends,” said Raihan. “I’ve been affected by policies that promote income inequality.”

Once the week of organized action is over, the youth leadership team at DRUM will work on a plan to reevaluate and decide what steps need to be taken next. Regardless, the plan is to continue to challenge the political leadership.