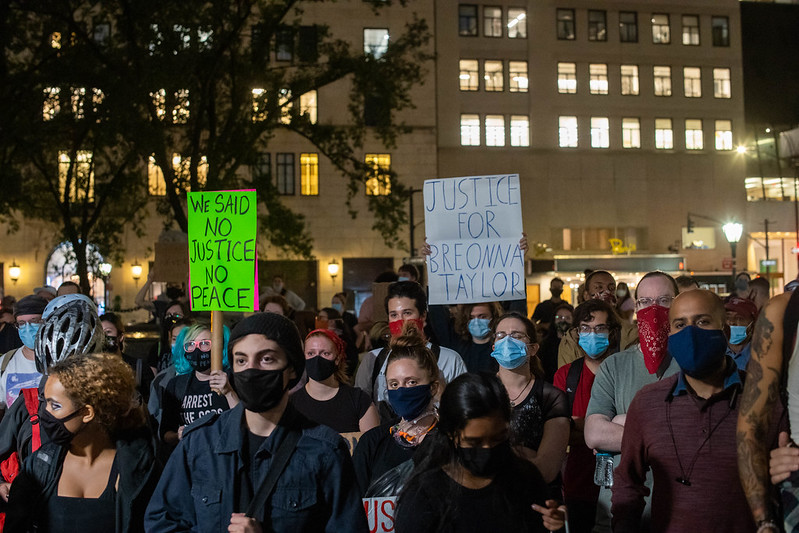 Amid the crescendo of emotions following the grand jury’s verdict on Breonna Taylor’s  police killing, protesters have resuscitated nationwide rallies to assert that Black Lives Matter.

Madeleine Greene, a resident of Illinois and an active participant of the protests in Chicago yesterday, said that the verdict represents a broken system that protects the white, wealthy class. 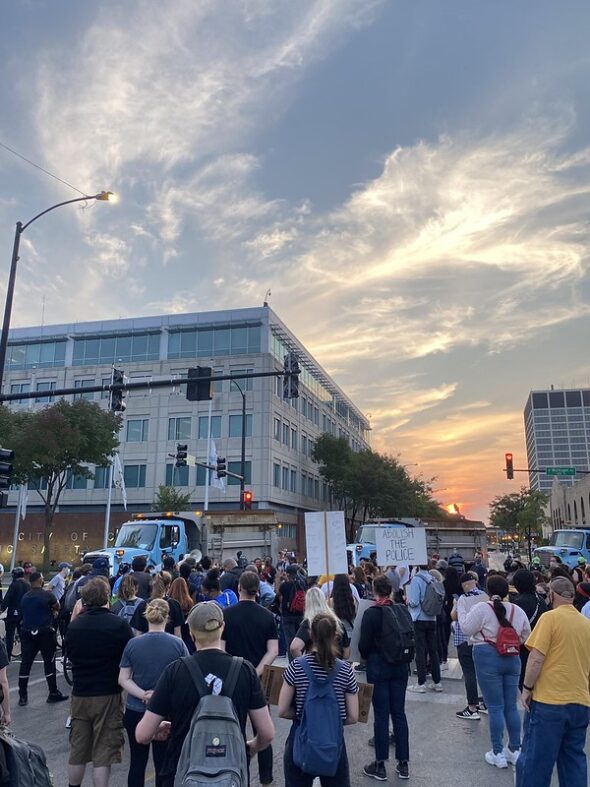 Protesters gather in Chicago, Illinois to peacefully rally about the verdict on the Breonna Taylor case. September 23, 2020. Photo courtesy of Madeleine Greene

“White officers killed Breonna Taylor, and only one is being charged with a Class D felony that is akin to property damage. The verdict here is a joke, and this is not justice,” said Greene. “…2020 needs to be a watershed moment for our country to reckon with its racist foundation. Slavery did not end in 1865, it was simply morphed into the prison industrial complex.”

Kentucky Attorney General  Daniel Cameron said that the decision was reached by examining the actions of Sgt. Jonathan Mattingly, Detective Brett Hankison, and Detective. Myles Cosgrove — the three officers who fired  weapons in the early morning hours of March 13.

The grand jury decided that the officers were  justified in firing into her home because they needed to protect themselves after they faced gunfire from her boyfriend. The only charges were three counts of wanton endangerment against  Hankison for shooting into a  neighbor’s home. He is the only officer who has been removed from the force.

As the public continues to express outrage and demand justice for Breonna Taylor, the justice system’s role has also come under the microscope.

“We will not know justice until we defund the police, and defund the private prison industrial complex,” said Greene.

Black people are not the only ones protesting at this time of explicit racial unrest.

A barrage of tweets permeated cyberspace as the hashtag #BreonnaTaylor went viral.

Ibram X. Kendi (@DrIbram), a number-one New York Times Bestselling Author, Professor, and Director of the Center for Antiracist Research at Boston University, tweeted in support of the cause. He also spoke on the precariousness of being a Black person in America.

To not indict the officers for murder is to claim #BreonnaTaylor killed herself. Racist America constantly kills Black people and then tells Black people we killed ourselves. Racism extends past death. But we’ll never stop declaring that our lives matter, that our deaths matter.

This is who @DanielCameronAG is. They elevated him to speak at the RNC before the “investigation” had concluded. They tossed his name around as a future Supreme Court Justice. And now there is no justice for #breonataylor This man is a disgrace. pic.twitter.com/iToI8R6bJf

Cameron held a press conference  to detail the investigation findings, which led to  Hankison’s indictment announcement.

“The decision before my office is not to decide if the loss of Breonna Taylor’s life was a tragedy — the answer to that question is unequivocally, yes,” said Cameron. “…My job as the special prosecutor in this case was to put emotions aside and investigate the facts to determine if criminal violations of state law resulted in the loss of Miss Taylor’s life.”

Keshia Morris, a resident of Foley, Alabama, said that Cameron’s actions regarding Taylor’s death showed carelessness and a lack of empathy.

“What happened today was disheartening, and I have no respect for the attorney general,” said Morris. “He wouldn’t even address her death as a murder; instead, he referred to it as a tragedy, as though she was killed in a car accident. No, she was murdered.”

Many concluded that he was incompetent and unable to carry out the civic and humane duty of honoring Taylor’s untimely death with ample justice after he announced that no murder charges would be brought against the three officers in question.

Our hearts are with Breonna Taylor’s loved ones and all those who feel her loss. We see you, we hear you and we support you. We feel her loss, too. This is her hometown. She is one of us, and we are grieving with her family and our community. We are in this together.

Taylor’s extended family led the protests in downtown Grand Rapids. In an interview with WOODTV, Taylor’s cousin, Tawanna Gordon, referred to Taylor’s death as a “wound that never heals.”

“I am upset. I am over it, and I am going to march today to the police department,” said Gordon to a crowd of protesters.