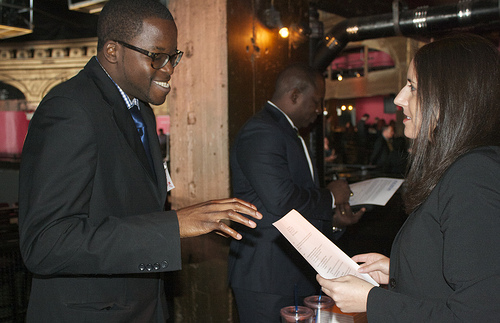 The last time Jaimel Greene had a full time job he was doing accounting work aboard the U.S.S. Mahan while serving in the Navy.

That was five years ago.

Since then, Greene, 32, has held part time and temporary jobs, but has not found success in landing a full time position. While his experience in the military was in accounting and finance, he said he’s willing to work in another field.

“I know that’s what my resume says, but if somebody offers me the opportunity to learn and get on the job training and I find that it fits me and fits the company, I would go for it,” Greene said. “I’m pretty much open to anything. Something that I can grow in and make a career.”

Greene was looking to find that career at a media and advertising related job fair this afternoon at the Roseland Ballroom in Manhattan. The Iraq and Afghanistan Veterans of America (IAVA) and Advertising Week put on the fair, which featured around 20 employers, including CBS CORPORATION and Complex magazine. About 50 veterans attended.

Greene, who joined the military in 2003, grew up in East New York, Brooklyn joined the Navy to get a change of environment and help further his life and career.

Greene served in what he called a “diplomatic deployment” because the ship he served on would travel to different countries and the sailors would interact with everyday citizens and international dignitaries.

“Even though we weren’t fighting the war physically we were still helping out,” Greene said. “It changed their perception of America. They actually got to meet people [military members] first hand and interact.”

But when Greene eventually left the Navy in 2008 and began looking for a job or to enroll in college, his life became a little more difficult.

“It’s been rough,” said Greene who said he struggled to get support from the Department of Veteran Affairs to help with his injured knees and the glaucoma in his eye, injuries that both originated while he was in the Navy.

After finally getting medical assistance from the VA, Greene was accepted into college in 2010 under the G.I. Bill where he planned to become a drug and alcohol counselor.

But only three months after being in college, the VA informed him that there was an error and he wasn’t supposed to have been approved for school. Greene was forced to drop out of school and was stuck with student loans he couldn’t afford..

“I was very disappointed. It was like life was taken out of me,” Greene said. “To come back and get denied for a lot of stuff, it hurt, it shattered me. It just changed my whole lifestyle around. I got depressed. I didn’t really want to do nothing. I had to find it in myself to really say you can’t stay here; you got to move on.”

Greene was able to begin moving on when the IAVA agreed to help him pay down the debt and help him improve his life. Greene said that the difficulties he went through temporarily brought him down emotionally, but that he now still wants to go to school and get a full time job.

“In the military you learn: you have to fight to get to where you want to be at,” Greene said.

Someone else who had to fight was veteran Phoebe Gavin, 27, who was in a similar position when she got out of the military in 2010, and realized getting a job wasn’t going to be easy.

“I expected to have a little bit of difficulty finding a job just because the economy was falling apart, but I really didn’t expect it to be as bad as it was,” said Gavin, who served in the Army in Iraq in 2007 and now lives in Sunnyside, Queens. “And it took me a while to figure out it wasn’t just the economy, part of it was me.”

What Gavin realized was that she wasn’t able to explain to employers what her military experience was and how it would relate to her getting a job. She also didn’t have experience in writing resumes and doing interviews because she joined the Army at 17.

IAVA helps veterans with resume building, interview skills, and developing military skills into citizen speak through their partnership with Cisco and Amazon, said Derek Bennett the chief of staff at IAVA.

Gavin found that many of the military skills could be applied to the workforce including making due with few resources . Gavin also emphasized that veterans leave the force with a high level of maturity.

Gavin, who attended last year’s job fair, got a full time job in June and instead of meeting employers at this year’s fair, she is helping other veterans in her new position as Outreach Coordinator for IAVA.