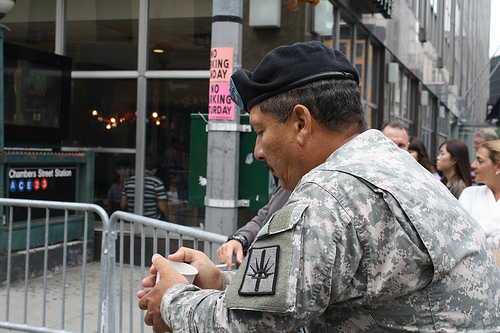 Returning to ground zero for the first time since being deployed to the site two days after the Twin Towers fell, retired U.S. Army Sergeant Wilfredo Torres marveled at how different the area looked ten years later. Photo by Chris Palmer

Two days after the Twin Towers fell in 2001, Wilfredo Torres, a U.S. Army sergeant stationed in Harlem, was sent to ground zero with his platoon.

Ten years later, returning to Lower Manhattan today for the first time since 2001, Torres leaned against a guardrail at the corner of Church and Murray Streets and gazed up in awe at the buildings towering over him.

“It’s amazing how it’s so clean,” said Torres, 56, who now is retired and lives in Buffalo, N.Y. “When I was here 10 years ago, there was a lot of dust, a lot of garbage. The buildings were just covered in white.”

Torres spent 21 days in the rubble with fellow members of the military, firefighters, police officers and others, cleaning, deconstructing and pulling bodies out of the collapsed towers.

“We did whatever was needed,” he said. “Anything to help.”

Torres was one of many veterans at the remembrance ceremonies today, eager to share stories of war, death, hardship and triumph.

“It means so much to me to be here right now,” said Robert Dodds, 22, a lanky Army civilian affairs specialist from Pocono Pines, Pa. Dodds, sporting Army fatigues with a maroon beret, had vowed to spend as many 9/11 anniversaries as he could in Manhattan, but spent last year’s anniversary in Walter Reed Army Medical Center.

While serving in Afghanistan, Dodds said he was hit with a rocket-propelled grenade, or RPG. “We took, like, 50 RPGs to our vehicle after it flipped over,” he said. “I was with my friend. We were fighting for our lives, but we made it out alive. It was a miracle we didn’t die.”

“My legs got peppered with shrapnel,” he added. “I had some nerve damage on my right ankle. For a while it was hard to stand up without pain medicine. But after a bunch of rehab, it healed up pretty good.”

Dodds, stood with his friend Ashley Cialella, 22, of Levittown, Pa., also an Army civilian affairs specialist. Both he and Cialella have lost friends to the war.

“One of my sergeants died,” Cialella said. “My good friend Ralphie died, too.”

Dodds joined her in recalling their losses.

“One of my good buddies died when I was home,” Dodds said. “I hadn’t cried since I was a little kid, but I just lost it. I’d rather get wounded every day of the week” instead of losing a friend.

Scott Sanchez, 34, of Midwood, Brooklyn and a former field artillery specialist in the Army, lost a friend in a Humvee accident.

He said he dealt with minor symptoms of post-traumatic stress disorder when he got home.

“It didn’t really hit me ‘til after I got out,” said Sanchez, who left the Army in 2007 and is now a student at Berkeley College in Manhattan. “A lot of guys in the military say ‘What are we doing?’ It’s hard to know sometimes.”

Despite the difficulties of military service, Vincent Fraser, 51, of Middle Village, Queens, a captain in the Army Reserves, swelled with pride as he looked around the area of Manhattan that was once caked in ash. He served at ground zero on the day of the attack. He thought it would take 10 years to clean up the rubble and debris.

“I remember seeing a firefighter being brought out with a flag on top of his body,” he said. “Everyone was crying. Barely a day went by when you didn’t cry.”

Then he paused and took a deep breath.

“But to see this,” he said, motioning towards the partially-constructed 1 World Trade Center tower. “This is a miracle. I was proud then, when we went to ground zero, and I’m proud now of being a New Yorker.”