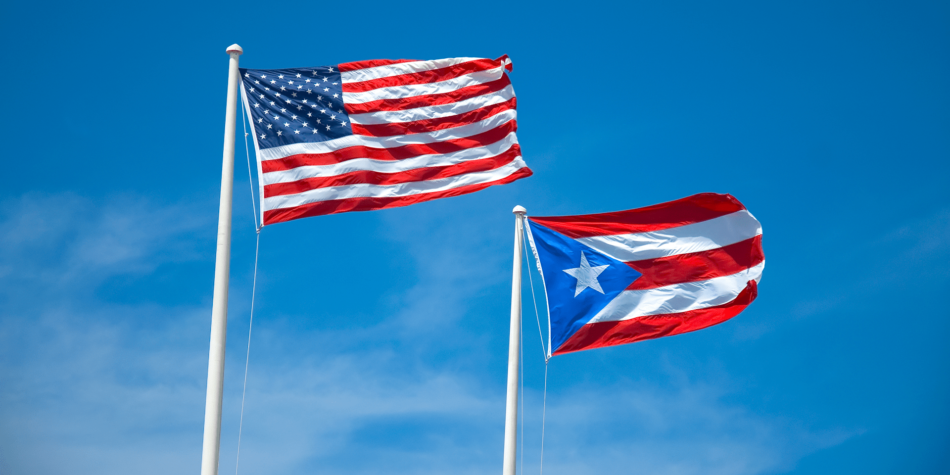 The American and Puerto Rican flags fly side by side.

On August 15th of 2020, I received an email from the Biden-Harris campaign expressing excitement over Joe Biden’s recent VP announcement. Towards the middle of the email there was a blue box which said: “Do you plan to vote for Joe Biden and Kamala Harris this fall in Puerto Rico?” The options were yes, no or undecided. Two months later, on October 12th, I received another one. The first sentence was: “History is happening in San Juan and all across America where folks are casting their ballots in this election.” I was infuriated. There are approximately three million U.S. citizens who can’t vote in the U.S. elections, and those are the millions of eligible American voters living in Puerto Rico. I read these sentences over and over again. Surely the Biden campaign wouldn’t be so careless as to imply that they weren’t aware that Puerto Ricans can’t vote without a mainland U.S.A. address?

Despite being U.S. citizens since 1917, despite holding a U.S. passport and despite being able to join the U.S. army, Puerto Ricans who live on their home island do not have the right to vote in the U.S. presidential election. A study conducted in 2012 by economist Rosario Rivera Negrón, former President of the Puerto Rico Economists Association and a professor at the University of Puerto Rico, demonstrated that “in a typical year (2008), the Puerto Rican economy received a total of $4.6 billion in U.S. federal dollars, while contributing $71.6 billion dollars to the U.S. economy.” Despite all that and much more, unless they live in the U.S., Puerto Ricans can’t vote for “their” President.

“If we die in the army for this country why shouldn’t we be able to vote for our Commander in Chief?” says Adriana Rozas, a Journalism graduate student in Syracuse who is voting for the second time in her life, but for the first time in the U.S. She was one of several Puerto Rican friends who I contacted to discuss voting as a Puerto Rican. She graduated from Amherst College in 2019 and just sent in her absentee ballot for Massachusetts, where she had worked on Ed Markey’s campaign. She explained, “It felt weird, knowing that I’m going to vote but not my parents. Honestly it hurt because yes I voted but there are three million people that aren’t going to vote for their president.”

It is a strange privilege that we don’t take for granted, not only having the right to vote in the U.S. but being able to choose whether to vote in the U.S. or in Puerto Rico. Puerto Rico holds its election on the same day as the U.S. does and in fact, it’s a national holiday. María del Mar Fournier, a graduate student at Columbia’s Teacher College explains, “That was a very hard decision for me because I obviously want to get rid of Trump and I have a very clear idea of what I want in the U.S. but in Puerto Rico there is a lot more uncertainty.” Fournier is one of many who feel it is a tough and often unfair decision to have to make. Rozas agrees, explaining, “I feel very connected to Puerto Rico and when I moved, that connection became even stronger, I put more effort into that connection knowing I’m not on the island. It was a hard decision because it felt a little bit like I was betraying ‘la patria’ (Spanish for homeland) by not voting in Puerto Rico but I think the most important thing right now is to get rid of Donald Trump.” Tatiana Rotger, who graduated from Penn State and is currently looking for work in Chicago, chose to vote in the U.S. elections both in 2016 and 2020. She says one of her motivations is knowing that Puerto Ricans in the island can’t vote. “I feel like I have to represent [them].” she says.

Of the millions of Puerto Ricans who get to choose where to vote, not everyone feels that voting in the U.S. rather than in Puerto Rico is the obvious choice. Pia Montilla, who lived in New York City for nearly five years and is now temporarily back home in Puerto Rico, explains it can feel hypocritical “to vote somewhere that wouldn’t give you the right to vote if you didn’t live in mainland U.S.A. It feels like a business deal. Someone can convince you to vote for them but that very person won’t fight for your right to vote if you were in Puerto Rico.” However, at the end of the day, no matter where or for who they vote for, everyone I talked to has one priority in common: Puerto Rico.

Alejandro Auffant, who was working in sales for the Chicago Cubs and has come back to Puerto Rico during the pandemic says that, “Through all my actions I keep in mind that my end-goal is being back in Puerto Rico. For me the way to vote in the U.S. is about who would do better for Puerto Rico.” Rozas agrees, “As a Puerto Rican in the ‘diáspora,’ I vote based on the issues I care about but [being] Puerto Rican, I need to think about who is going to be better for Puerto Rico. I think about who would have handled Hurricane Maria better. What candidate is going to treat us better regardless of whether they give us statehood or independence?” Fournier reinforces the same feeling, that it’s Puerto Rico or bust. She says, “My priority will always be Puerto Rico, I consider myself Puerto Rican even if I’m living here, I feel like I’m on vacation here and my heart is always there. My priority will always be what benefits Puerto Rico.” states Fournier. Javier Álvarez, who attends Tulane Law School, explains, “For so many years we’ve been part of a community that has been marginalized and not been at the forefront of the national conscience. As a Puerto Rican it’s our duty to vote in order for those issues to enter the national conscience.”

At the end of the day, people in Puerto Rico don’t pay federal income taxes, which has landed us in a “no representation without taxation” situation. There is a Resident Commissioner, who is the equivalent of a non-voting member of Congress. But if the 15th Amendment to the Constitution is meant to protect U.S. citizens’ votes, can not paying federal taxes take away that protection? Is the Puerto Rican land that the American government uses for army bases not enough? Were the women left sterilized after birth control experimentation at the hands of U.S. doctors not enough? Are our soldiers not enough? Do we only get to be first-class citizens when our address has U.S.A. on it? Only when you need us?