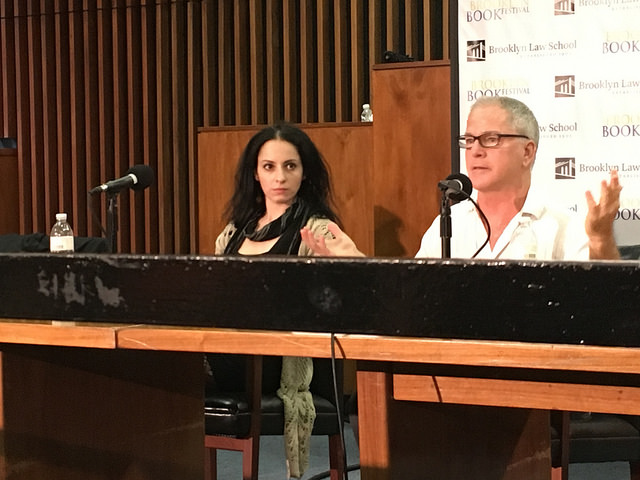 Artist and journalist Molly Crabapple, left, and activist Larry Siems address an audience of around 120 people at the Brooklyn Book Festival today. The festival, which was held in the Brooklyn Heights neighborhood, featured around 300 writers of nonfiction, fiction, poetry and comics. Photo by Razi Syed.

As an audience of around 120 people in the dark-paneled mock courtroom of Brooklyn Law School listened Sunday afternoon, graphic artist and writer Molly Crabapple recalled sitting in pretrial hearings for the alleged mastermind of the 9/11 attacks.

“In the Summer of 2013, I got the chance to visit Guantánamo several times to do a series of investigative reports for VICE,” said Crabapple, in a panel discussion titled “Writing the War.” “By the time I visited, there were 150 men remaining of the nearly 800 Muslim men, who were rendered, kidnapped or incarcerated. And the majority of those men were on hunger strike.”

Crabapple was among one of hundreds of authors featured in panel discussions and readings at the Brooklyn Book Festival, which has been held annually since 2006.

This year’s festival ran from 10 a.m. to 6 p.m. on Sunday and featured around 300 writers of nonfiction, fiction, poetry and graphic novels. The day’s events were spread out on 14 stages located at Brooklyn Law School, the Brooklyn Historical Society Auditorium, Congregation Mount Sinai and other spots in the borough.

Panels were held on topics of gender and sex, war, modern love, comics and technology.

Bedford-Stuyvesant resident Anna Willoughby, 23, was at the festival for her first time. Willoughby, who had already attended two panels and was planning on seeing another with popular science writer Carl Zimmer, said she was enjoying the debates the topics provoked.

Crabapple described the restrictions placed on the press at the island prison.

“Guantánamo Bay is one of the most censored places in the world,” Crabapple said. “It is a place where every journalist, every photographer that visits there has to wear a giant sign on their neck, saying, ‘Military escort at all times.’

“All photos that taken in Guantánamo are looked at by a number of military, and they are deleted if they don’t meet their standards of security,” she said. “Even when you see the prisoners, you see them through a one-way mirror, so that they don’t know that you’re there and don’t make any attempt to communicate.”

Instead of trying to work around the censorship she faced, Crabapple said she decided to highlight it and make it part of the story.

“With my sketchbook – because I draw rather than take pictures – I was able to get images that photography couldn’t,” Crabapple said. “So I’m forbidden from drawing faces – how do I handle that? I can draw the man from the side or behind, which conceals the censorship. It hides its existence. Or I can emphasize it.”

Siems, whose most recent work book, “Guantánamo Diary,” was an annotated manuscript of prisoner Mohamedou Ould Slahi, a native of Mauritania who was rendered to the Caribbean island naval base. Slahi was approved for release in July but remains imprisoned.

“It was forced out by secret litigation in a process that took about seven years,” Siems said, of the manuscript that was eventually edited and published in 2015.