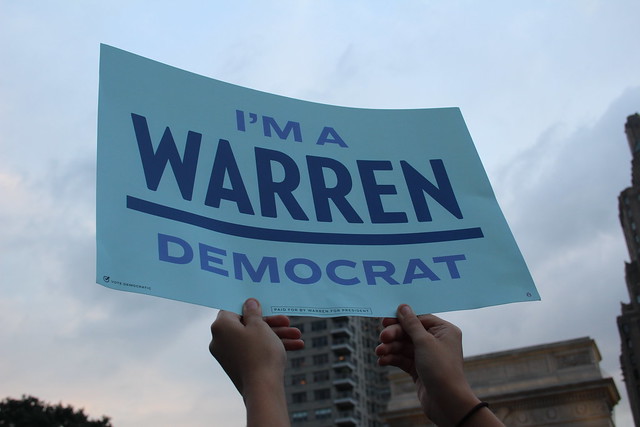 The Democratic presidential hopeful vowed to purge corruption in Washington D.C. with what she described as big, structural change to put economic and political power “in the hands of the people.”

“Corruption has put our planet at risk,” the Massachusetts senator said. “Corruption has broken our economy and corruption is breaking our democracy. I know what’s broken. I got a plan to fix it and that’s why I’m running for President of the United States.”

Warren delivered her speech close to the former site of the Triangle Shirtwaist Factory, on Washington Place, where a fire in 1911 killed 146 workers, most of them immigrant women. The industrial disaster was the catalyst for carrying out labor reforms.

“It was one of the worst industrial disasters in American history,” Warren said. “One of the worst, but it should not have been a surprise.”

Warren argued that the fire was a result of corruption because factory owners used their political connections to avoid improving work conditions to save money. She asserted that “the same system” is at work today.

“Climate change, gun safety, health care: On the face of it, these three are totally different issues,” she said. “But despite our being the strongest and wealthiest country in the history of the world, our democracy is paralyzed. And why? Because giant corporations have bought off our government.”

To combat corruption, Warren proposed bans on secret meetings between public officials and lobbyists, on corporate lobbyists “bundling” campaign donations, on members of Congress and White House Cabinet secretaries from becoming lobbyists, on lobbyists from making political contributions and on lobbying on behalf of foreign governments, among other actions.

Her remarks throughout her approximately 40-minute speech were met with cheers and applause from spectators, some holding up signs that read “I’m a Warren Democrat.” Supporters of all ages stood on benches and held their phone cameras high to try to get a glimpse of Warren, who spoke beneath the Washington Square Arch.

One of the younger people in the crowd was Abigail Cross, 22, who commended Warren for incorporating the Triangle Shirtwaist Factory fire in her anti-corruption speech and for pointing out how corruption affects several issues.

“She underscored the importance of how that extends into every aspect of our lives,” she said. “Our government has so much control over everything, and if that power is corrupted, so many other aspects of our lives are affected.”

The Bronx resident said she was not completely decided on which candidate to support before attending Warren’s rally.

“I’m definitely a fan of Elizabeth Warren and, of course, the fact that she’s a woman running, but I came out of the rally much more a fan of her,” she said. “I like her, but I also believe that she can really do the job well.”

“I was evaluating the other candidates to see if there was the kind of connection I felt to Kirsten Gillibrand, leading by empathy and compassion,” Sperry said. “And I see those qualities in Elizabeth Warren.”

For Warren supporter Craig Leibner, 62, the senator is the candidate best suited to beat President Donald Trump, whom she described as “corruption in the flesh” during her speech, and has the most comprehensive proposals out of all the Democratic contenders.