Who is chasing Harry Winston? 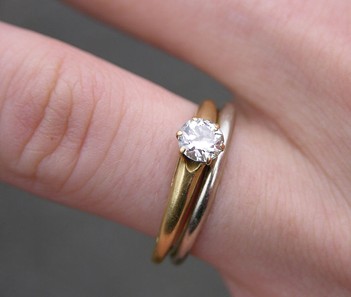 When it comes to engagements, diamonds like this one are still a girl's best friend.

“Let the diamond find you.”

Sipping mimosas beneath an arrestive chandelier in the Harry Winston private suite, one floor above the storied flagship salon on Fifth Avenue, a dozen glittering women and a handful of apprehensive men did not have trouble heeding gemologist Tom Burstein’s request: they could find the diamonds quite easily.

Perched in an open vault that once secured the Hope Diamond, these exorbitantly priced engagement rings held their own at the Harry Winston Bridal Seminar one Saturday morning in early February.

Burstein, vice president of the New York store and keynote speaker at the seminar, described Winston’s legacy and the women he bejeweled, such as Elizabeth Taylor or Jackie Onassis. But it was almost possible to forget that the U.S. economy is experiencing the worst decline since the Great Depression.

At a time when the world’s largest banks are folding and the unemployment rate is climbing to new heights, who’s shopping for engagement rings that cost as much as $15,000?
Plenty of people, according to Harry Winston representatives.

“Every month is bridal month,” quipped Burstein. And while he admitted “the diamond market has softened,” the Harry Winston diamonds are still in demand.

Since December, the luxury jeweler has hosted three bridal seminars, and this February event was particularly well attended.

“They are educational,” explained Katherine Kane, director of marketing, as two waiters circulated flutes of champagne and crisp linen napkins to guests.

Dan Svejanar came to the event on his own, dressed in jeans and ready to be informed about carats and clarity, cuts and color.

“My girlfriend thinks I am at the office,” he laughed. While Svejanar didn’t precisely know when he would pop the question, he wanted to be equipped with the perfect rock.

Asked if the economy has affected his plans of proposal, Svejanar shrugged his shoulders.

Despite the deep economic impact on retail and restaurants, the wedding industry is not experiencing major setbacks. Tracey Goldstein, owner of New York’s event planning firm Polka Dot Events, has not seen a decline in wedding clients since she opened her company in 2007. On the contrary, Goldstein claims that it is currently a “buyer’s market” for brides and grooms who are trying to negotiate reasonable deals with vendors who, fearful of being without business, are now more willing to take on smaller jobs.

“Your wedding is one day; it’s not a matter of going to the grocery store and not buying organic because it’s too expensive,” Goldstein explained, adding that the people who are getting engaged right now are not the ones impacted by the declining economy.

“The guy who just got fired from Lehman Brothers is not proposing right now,” said Goldstein.

Nicky Reinhard of David Reinhard Events shared a similar sentiment in her description of the wedding industry of late.

“It’s not a science,” she said. “The reality is, people are always going to get married.”

Reinhard acknowledged that people are still calling her company to inquire about services and said she wouldn’t be surprised if the “million-plus weddings” were still being thrown. Still, that doesn’t mean that brides-to-be are not looking to be more conscious of how they are spending their money. Some are shrinking their guest lists, according to Reinhard; others may be cutting back on the flowers.

“People don’t want to give the appearance of spending superficially,” said Reinhard.

Is the wedding industry recession-proof? The business of throwing a wedding is rarely an inexpensive affair, and despite shaky financial times that warrant a government bailout plan of $798 billion, experts predict that florists and pastry chefs don’t have to start panicking yet.

“People are still planning weddings, but they are adjusting to what they can spend and what’s appropriate to spend.” Reinhard said. “They aren’t losing sight of what it is: It’s about family and great friends and what it takes to make that kind of thing.”

Elizabeth John, 28, will be a New York bride next June. She was thrilled when her long-term boyfriend, Eric, proposed to her during a stroll along the river in view of the Brooklyn Bridge. Eric works in the operations department at Goldman Sachs, so the couple is acutely aware of the waning economy.

“It feels funny to be planning a wedding now,” John said in a phone interview. “Why are we spending so much money?”

In the early stages of planning, John used to toy with the idea of hosting two different events — a traditional American wedding in addition to a Chinese banquet to honor Eric’s Chinese heritage. It didn’t take long to discover how costly it would be to execute that plan.

Catherine Smith can empathize with having to restructure a wedding budget. The 30-year-old associate at Burson-Marsteller PR firm was completely caught off-guard when her boyfriend, Matt, popped the question while the two were out to dinner on the Upper East Side shortly after Thanksgiving.

She was ecstatic. But the initial excitement soon gave way to stress as Smith had to negotiate ways of cutting back on expenses.

“My dad is semi-retired, and he got burned in the market,” Smith said. “There was money set aside for my wedding that just isn’t there anymore.”

Smith described the frustration of finding talented photographers and musicians at reasonable prices.

“I love the photographer at my friend’s wedding, but after only a year and a half, he’s doubled the prices and then some.”

Smith sighed. “I wanted to tell him, ‘Read the paper! Watch the news! How can you be charging people this much?’”

If every month is bridal month as the Harry Winston connoisseurs suggested, then it must not be hard to do.

Big Article! Hey, did you realize that this blog is catalogued by Google news?I just checked your backlinks and seen it…How the heck did you pull that off?lol.

Hi, I appreciate your blog! Found it on Bing when I was looking for wedding dresses.

You’ve got your position through better than I at any time could, thank you!

Congratulations on having one of the most sophisticated blogs Ive come across in some time! Its just incredible how much you can take away from something simply because of how visually beautiful it is. Youve put together a great blog space –great graphics, videos, layout. This is definitely a must-see blog!

Well, this is my first visit to your blog! We are a group of volunteers and starting a new initiative in a community in the same niche. Your blog provided us valuable information to work on. You have done a marvellous job!

Intriguing site. My co-workers and I were just discussing this the other evening. Also your page looks fantastic on my aged sidekick. Now thats uncommon. Great function.

A fashion designer is someone that creates functional garments from textiles using an array of techniques. Even though most people think of big names like Donna Karan or Michael Kors when they think of design, they are just the tip of the iceberg. Many designers work for large companies to create ready-to-wear lines for consumer stores such as the Gap and Target. Still more work for bigger name designers like Karan to produce the many lines under that particular corporate name.

What Is a Fashion Designer? | whatisafashiondesigner.viisco.com/