With change in U.S. population, soccer sees boost in popularity 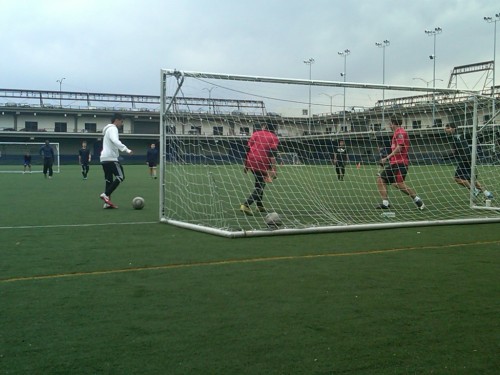 Big increases in the U.S. immigrant population could correlate with soccer’s growing popularity.

According to U.S. Census data, the U.S. Latino population jumped 43 percent between 2000 and 2010—85 percent of whom are from countries such as Mexico, Argentina and Venezuela where soccer is king.

Major League Soccer also saw a 5 percent increase in average attendance in 2010, with more than 16,500 fans per game according to the Soccer America.

These stats could put soccer within striking distance of becoming a major sport in America.

“I think it definitely could become a major sport in the future,” said Paul Rolston, a former Division I soccer player for Manhattan College. “With the way the sport’s been developing in this country, I think there’s a good chance it will definitely become even more popular.”

Rolston, of Riverdale in the Bronx, said he played all types of sports as a kid, often following the lead of his older brothers. But when it came time to pick a high school sport, he chose soccer – both as a player and as a fan.

“They’re building new stadiums all over the place and selling out stadiums,” he said. “I was at a Red Bull’s game last weekend and it just seems that fans are very excited about the game now.”

Listen to what New York soccer fans have to say about the game’s popularity in America
Altarv1.mp3

New York City, which is home to more than 3 million Latinos, has contributed a great deal to the national soccer fan base.

The addition of the Vancouver Whitecaps and the Portland Timbers also boosts the MLS franchise total to 18 teams, giving the league six more teams overall since 2000.

Soccer’s popularity among younger Americans has also increased. The non-profit organization U.S. Youth Soccer now has more than 3 million members between 5 and 19-years-old.

“I think it’s a number of factors,” said U.S. Youth Soccer president John Sutter, referring to the growth in participation. “You have soccer becoming more of a mainstream sport. The 1994 World Cup kicked (the increase) off and each of the World Cups since then have probably spread interest. And you have the message that schools are pushing down on kids – that we want you to become a little more physically fit.”

U.S. Youth Soccer represents the largest youth sports organization in the country, according to its website; its membership is higher than that of Little League baseball and dwarfs Pop Warner football.

Sutter said the number of Latinos and other immigrant participants have contributed to the increase in U.S. Youth Soccer’s membership. He said the organization does not keep exact figures on immigrant participation, but added that the group establishes programs where immigrants settle.

“We have special inner-city programs, like our Soccer Across America program, which specifically targets folks in those types of areas,” Sutter said. “Those will reach out to the more diverse cultures. Most of which have soccer in their background.”

Sutter also credited Title IX, the U.S. law that protects against discrimination from an activity based on sex, for growing interest in the game among U.S. female adolescents.

Despite soccer’s growing popularity, sports management expert and former sports agent Robert Boland said he’s not sold on the idea of it becoming a major sport in America.

“I think soccer is better served by being realistically aware of what its limitations are and what its economic model is,” he said.

While soccer has taken a tremendous leap as a participatory sport, Boland said spectator numbers do not indicate any notable achievement, adding that most recent immigrants also assimilate to the American sports scene.

“Pele’s first game in the U.S. in 1970 drew 10 million viewers on CBS,” Boland said, referring to the Brazilian soccer star Edson Arantes do Nascimento’s – better known as “Pele” – first visit to America. “Last year’s World Cup finals drew 17 million viewers 40 years later. The population has grown by 33 percent. So, based on those numbers alone, a throwaway event that was essentially a minor league involving Pele drew as many viewers as the World Cup finals.”

Boland also said he’s not sure whether MLS can replace one of the lesser of the four major U.S. sports, the NBA and NHL, based on total attendance. He said popularity should be measured in other ways.

“That’s an apples to oranges comparison,” Boland said, referring to MLS attendance versus that of the NHL or NBA. “An indoor arena that holds 20,000 at 17,000 attendance has sold most of its seats…Percentage of capacity is more important than pure number of fans…If MLS is playing in front of 17,000, but the average stadium capacity is 28,000 or 29,000 that’s not as good comparatively.”

In other words, if the NHL or NBA played in bigger arenas they would probably be outdrawing MLS by a more significant number.

Boland said MLS must keep ticket prices lower than other professional American sports in order to keep fans coming back. He added that puts MLS closer to the category of Minor League Baseball and the Ultimate Fighting Championship, or UFC.

But others like Rolston still believe the sport can have a foothold within the American public. He said if MLS can recruit more foreign superstars, such as David Beckham, and the U.S. National team continues to perform well at international tournaments, soccer may soon be considered another American pastime

“I think for young people growing up watching these great players will help them learn the game better,” he said. “I think (kids) will work harder to try to be better players if they are led by good examples.”

Simply put, Baseball is a Dying Sport!
Baseball is too Boaring, Too Long of a Season, Losing is acceptable, and the skill to play Baseball is nothing impressive “anymore”, in 1950 it was.

Soccer/Fotbol on the other hand has action at all points of the game, and requires a very high skill level to be great, and involves the fans on a much more passionate level. When you go to a Soccer/Fotbol match, the fans aren’t sitting there having polite conversation with each other about how their work week was. Nope, the Fans are on their feet, chanting, singing, and having fun with all the other fans in their section. That’s what going to a Soccer game is like. In many ways, Soccer is aspiring to what going to a College or NFL Game is like. (Though they have a very long way to go to be on that level).

Does the transplanted latino population make a difference? Hell Yeah it does. Will White America continue to resist Soccer’s clearly increasing popularity just to try to hang on to Baseball for its own Prejudice reasons…Yes they Will. And that’s the ugliest part of it.

Soccer is an internationally played sport in which White Americans’ are far from being anywhere near the best. White America has a deep rooted problem with that, and it manifest itself by hating Soccer.

France once won the World Cup by fielding the most diversified field of players ever assimbled. Until America does the same, we’ll be confined to mediocrety.

In the Mean Time, Soccer will continue to rise in popularity until its too big to be sanctioned to ESPN 2 & 3. Thank you MLS for playing good competitive games this year, and thank you to our US Teams, both Men & Women for doing a Great Job showing off the future of Sport in America.

Sorry about the Racial realities that I commented on, but to speak on what’s holding America back from embracing Soccer and not mention that would be to tell a bold faced lie.