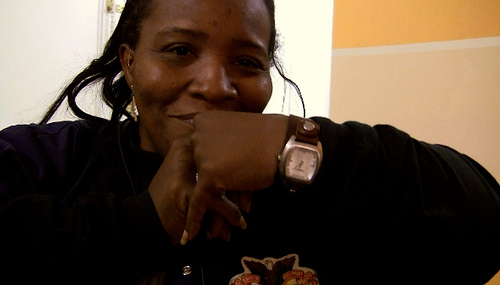 Penelope McClenan had a five-bedroom home when she left for Army deployment in Afghanistan. When she returned five months later it was gone.

McClenan, 50, of Saint Albans, Queens, suffered a head injury while on active duty. She transferred to a reserve unit as a chaplain assistant and finally to a transporter New Jersey unit, but when she suffered migraines related to her prior head injury, speculations by the unit eventually led to McClenan being demoted and a “drastic” drop in pay.

Paying her mortgage became a struggle and her home was put on foreclosure. At the same time, McClenan needed surgery related to her injuries that caused her to miss court dates, and her unit did not send in the paperwork confirming her prior deployment, which only lengthened the court process.

After several months, she was able to get authority to sell the house. McClenan sold the house to catch up to finances, but now she needed to find housing for herself and her son.

For single parents like McClenan, finding help to prevent homelessness is increasingly difficult. Of all of the Veteran Administration programs established to assist homeless veterans, more than 60 percent do not accept children, and many that do place age and number restrictions.

At the time, McClenan turned to her mother for temporary housing in Hollis, Queens, until she was told there was aid to assist her in transitional housing. However, this did not make the transition process easier for the single mother. A year later, unstable rent prices left McClenan battling eviction charges yet again. 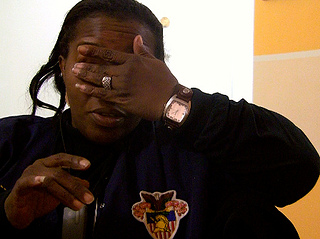 McClenan expresses emotional grief to having known female veterans who committed suicide due to the difficulties of finding and maintain housing. Photo by Talia Avakian

Experiencing the lack of proper services available for female veterans led McClenan to creating the Women’s Veteran Network, a non-profit dedicated to helping women in the situation she was in. She got in touch with female veterans she had met at the Manhattan and Brooklyn VA. The women in the network pitched in to finance the program’s events. McClenan also connected with the Wounded Warrior Projects, who assisted with outreach and executing larger-scale projects. With the assistance of the women in the network, McClenan is currently in the process of opening an all-female veteran shelter that openly accepts children in Long Island.

According to the United States Interagency Council on Homelessness, a female veteran is four times more likely as her civilian counterpart to experience homeless. According to the council, gender-specific organizations like the Women’s Veteran Network, which are not supported by the government, are crucial to helping women find stability in a safe environment.

Carol Anne Matuszewski, a Vietnam Air Force veteran, found solace in the network after facing homelessness.
Matuszewski, 63, of Bay Ridge Brooklyn, joined in 1968, believing the military would offer a solution to the limited career opportunities available to women at the time. When she returned from deployment, she discovered that her status as a woman veteran only increased the difficulty of finding both employment and housing.

Vietnam was a war that males were drafted into, and because female veterans had the choice to enter, potential employers sometimes condemned them for making that decision.

Matuszewski’s struggle to find a job left her homeless, but it was not only unemployment that led to her fate.

Many female veterans still do not identify themselves as veterans, remaining unaware of or feeling unqualified for veteran facilitation programs. This was the case for Matuszewski.

Matuszewski turned to Veterans Affairs for medical aid when she began battling cancer, and found the Women’s Veteran Network. 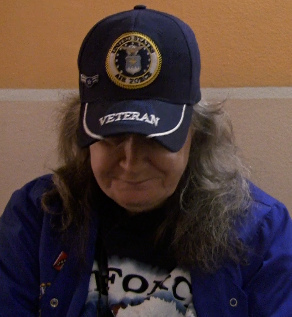 Vietnam air force veteran, Carol Ann Matuszewski, 63 of Bay Ridge, Brooklyn, had difficulty identifying herself as a veteran when she returned from deployment. Photo by Talia Avakian

Having a program that catered to women who understand one another’s struggles allowed Matuszewski to, for the first time, feel comfortable being “open” with others and to receive help for the struggles she has faced as a female veteran.

The Long Island facility is still in the process of completion, but getting women to feel comfortable with the shelter will be the main obstacle.