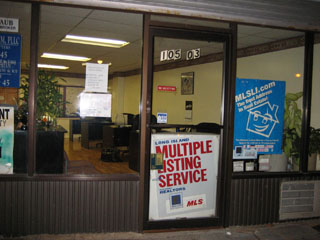 Jaime Taveras’ real estate firm consists of one crowded room full of shelves and crammed desks. He once had his own private office but now has to share a desk with a fellow broker, their desks separated by a tall counter.

He wore a sweater, jeans and dark cap as he played games on his laptop. As the number of clients decreased, he felt no reason to dress up for work. When business flourished years ago, Taveras said, “I was dressed in a suit and tie, waiting for customers to come in.”

For the third week of November, Taveras, 35, had three scheduled appointments, most of which he now receives by referrals. On his downtime, which he now has a great deal of, he said, he plays card games on his laptop and hopes someone will call to schedule an appointment.

Taveras is one of many brokers around the Woodhaven area who has resorted to renting out parts of the building he owns to earn a profit.

The stock market fell last September, and Americans felt the full force of it through the subprime-mortgage crisis — where homeowners could no longer afford their mortgages, resulting in bank-instated foreclosures — and losses for realty brokers began years before, starting in 2006. Real estate brokers and firm owners in the Woodhaven, Queens, area have felt a decrease of more than 65 percent of sales. Dozens of people were left unemployed, and more firms are near closing because customers are no longer purchasing or renting homes through them at all.

“I used to have, in the past six years, about 15 (licensed brokers), including managers and secretaries, but I had to let them go,” Taveras said.

Taveras, a Long Island native, previously owned a building in Bushwick, Brooklyn, from which he sold dozens of homes and apartments in the Brooklyn area per year. His other firm, Argenzio and Taveras Realty Inc., in Queens, covered real estate in Woodhaven, Richmond Hill and Ozone Park for the past 11 years.

Today, only a portion of one of his firms still exists. With the subprime-mortgage crisis across the United States, he had no choice but to close his Brooklyn agency. Taveras said “the bubble was about to burst” on his business.

“I was sad. I used to make good money, but at least I can spend more time with my family,” Taveras said. “Just being here without doing anything is devastating.”

Now he rents out some of the Woodhaven-based building he owns to a tattoo parlor around the corner.

Two blocks from Taveras’ business on Jamaica Avenue, Fang Xiao, a real estate broker for the Do Right Realty agency, sat in front of her computer in the nearly empty office. Xiao, like Taveras, was renting out portions of her office to bring in additional income.

Xiao, a Woodhaven local in her early 50s, noticed a drop in business around the end of 2007, after the firm sold about 30 real estate units per year and still had 20 agents employed.

“When the downfall goes, then agents started quitting, and the sales dropped to almost one or two for the whole year, for three years,” Xiao said.

There were once 30 real estate firms from 85th Street to 111th Street across Jamaica Avenue before the mortgage crisis, according to Taveras, though many have closed in recent years. Xiao doesn’t worry about competition with existing agencies, for the most part, because everyone is struggling.

Xiao said she felt “a lot of frustrations” because she, along with dozens of other brokers, sometimes had to compete in order to sell just one home.

“I was grave, very, very grave,” she said. “It was like a drought. Business all of a sudden stopped. (I) did not make any sales, the prices (were) too high. … The banks don’t lend, (and) buyers didn’t want to buy.”

T. Bernard Taub, 60, who has been in the real estate business for 25 years, is a broker at Allied Real Estate Inc. on 105th Street and Jamaica Avenue. While Taub has a private office in the back of the bureau, there are 10 desks in the main floor for brokers to do business. Out of the ten stations, only one is occupied on Monday afternoon, where an agent is on the phone.

There are no clients at the agency looking for a new home — Taub’s business plummeted to eight sales a year. In earlier years, before the mortgage crisis, Taub, from Richmond Hill, estimated he sold between 50 and 60 units annually in the area.

“It’s been very depressing, to put it mildly,” Taub said. “And it’s hard to pay the bills.”

Potential homeowners have avoided going to any real estate agents in the Woodhaven and Richmond Hill area. Taking alternative means, residents of the eastern Queens area have found housing without a Woodhaven-based broker, subsequently losing business for firms.

Tom VanSant, who moved to Woodhaven in early October, said he found his new apartment through an advertisement in the newspaper. As a means to save money, VanSant did not through a Woodhaven-based broker, who would have charged a finder’s fee. All that was required to procure the apartment was the first month’s rent and the security deposit.

“The rent was right,” VanSant said. He was grateful moving from a small apartment in Howard Beach, Queens, to a larger one at nearly the same price.

As for the idea of buying a house in Woodhaven, VanSant said he could not afford it “unless I hit the lottery.”

I found your blog on google and read a few of your other posts. I just added you to my Google News Reader. Keep up the nice work Look forward to reading more from you in the future.