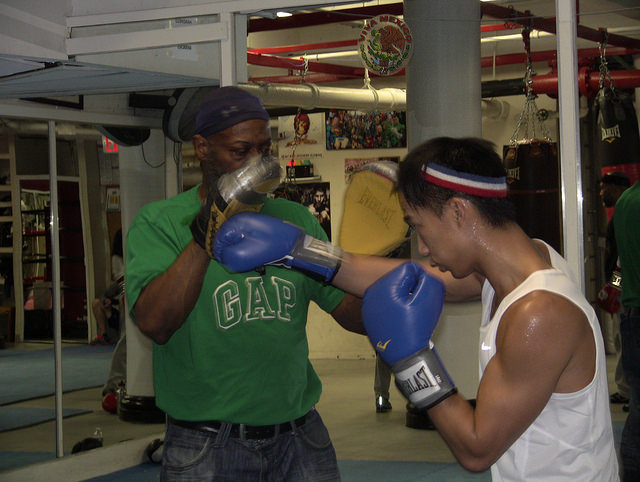 “Caution! Watch Your Head,” a sign read next to a protruding pipe near the entrance of Mendez Boxing Gym. Loud shrieks and banging noises pierced through the heavy door at the bottom of the steps, while the same instructions were being administered inside, “Watch your head!”

The narrow stairway led to the gym, one of the city’s premier boxing training facilities. A wide range of people visit the gym located off Madison Avenue and 26th St. in Manhattan, including some of the nation’s top prospects. From young to old, raw to polished, all boxers are taught to protect their head, but perhaps having a head worth protecting is what’s important.

“I had to quit high school, couldn’t even get a GED,” said Jose Lopez, a former boxer. “It’s too much, it becomes your life. Tests, exams, it’s draining, takes away from your boxing.”

Lopez, 24, is a trainer at Mendez. The Mexican native, who grew up boxing in California, explained the intense dedication it takes to seriously pursue a career in the sport. Young boxers get up early to workout, follow strict eating regiments, do not partake in nightlife, and some, as Lopez did, drop out of school. Despite living in the United States for most of his life, Lopez does not speak English well, and considered himself fortunate to be employed.

“Boxing is my life, it’s all I got. I’m lucky I have a job,” said Lopez, who now resides in Washington Heights. “Most boxers are poor, so they try to make money, that’s why turning pro is an option. But it doesn’t always workout.”

One boxer keen on turning pro is 16-year-old Josue Vargas. Vargas is about 5 feet 7 inches tall, thin but cut, with remnants of facial hair on his upper lip. His dad is a trainer at Mendez, and the duo just got back from Reno, NV, where Josue earned silver at the USA Youth National Championships, fighting at 141 pounds. Vargas goes to high school in the Bronx, but cannot promise that he will earn a diploma. 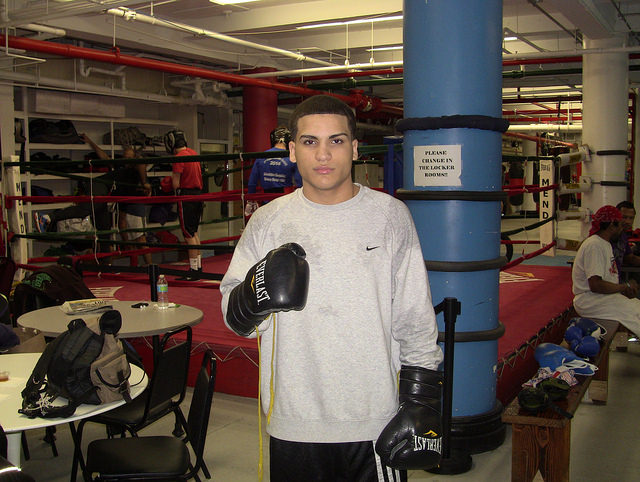 “A high school diploma is important to have, because you never know if you can make it in boxing. But when you’re a talented fighter, there’s a whole different story,” said Vargas. “To be honest, school right now has been tough for me, I’m too focused on boxing. I got a better chance with boxing than school, and I’m not really doing that well in school right now,” he admitted.

Amateur boxers must be 18 to become professional in New York City, and Vargas plans on making the leap as soon as he is of age. His next few seasons will determine whether he has what it takes to sustain a professional career, but not all boxers are so fortunate to even have the opportunity to try their hand in the pros. It’s for this reason that one of Mendez’s long time trainers, Elliot Nass, refuses to train young boxers that are not enrolled in high school.

“I train kids that are 15,16. I don’t give a crap how good they fight. If they don’t have homework, I’m not going to train you, go home,” said Nass, who’s been involved in boxing for 34 years. “Yeah, no way, there’s no excuse. If you’re poor, at least you know you can go to school.”

John Nazriev is one of Nass’s prized fighters and graduated high school in his native country of Tajikistan. Nazriev, 24, completed three years of college before moving to the United States, but has been unable to complete his degree while in America. Boxing, among other issues, has slowed down the fighter’s academic interests.

“I was going to come here to transfer my schooling, but unfortunately that couldn’t happen. Once I started boxing, everything became gym and work, and no time for anything else,” said Nazriev, who is the amateur purebred champion at 152 pounds. “I would like to, but when I get the opportunity. Right now, it’s kind of tough.”