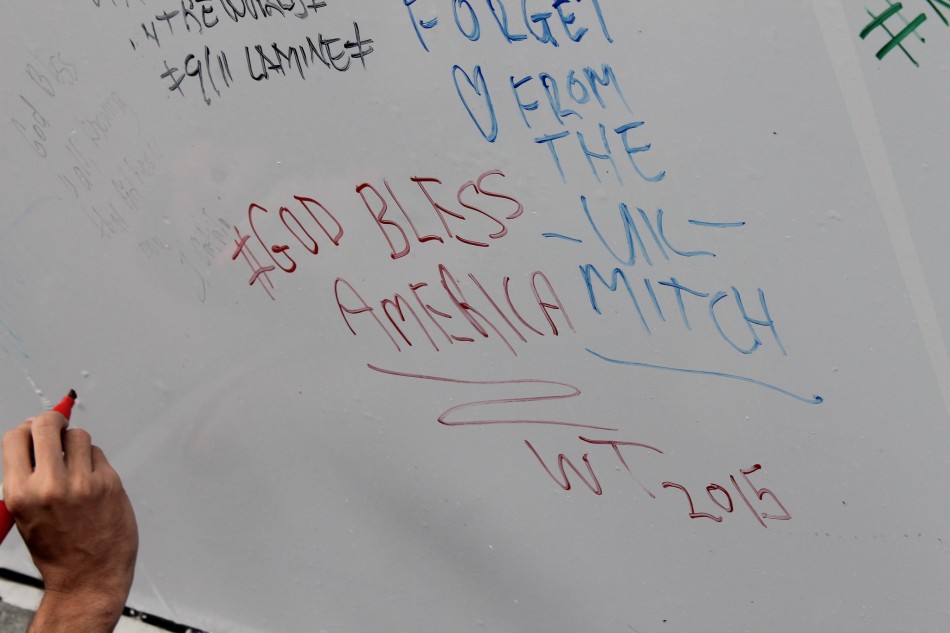 For yearly travelers to the Sept. 11 memorial in New York City, the 14th anniversary of the terrorist attacks was another opportunity not only to focus on remembering the tragedy, but also to celebrate America’s recovery.

Jose Colon, a New Yorker, visits the memorial every year on the anniversary and has put together a vest decorated with medals and insignia in memoriam of the victims. He lost a firefighter friend in the attack 14 years ago.

Although he visits the memorial every year, each anniversary brings with it new emotions, he said.

“Sometimes I just sit, and sometimes I get mad,” Colon said. “You know, we were attacked here, in our own country. [9/11] changed the country and the whole world.”

Colon added that in his 14 years experiencing the anniversary, he’s noticed a slight change in public attitude toward the event. 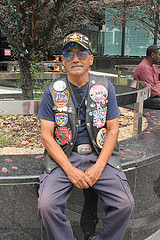 Jose Colon, who honors the 9/11 anniversary every year, wearing a vest he put together to honor and remember the event while downtown on Sept. 11, 2015. Photo by Karis Rogerson

“People today, it’s not like before,” he said. “Before, you would be more crowded here. Today people seem to be forgetting about it, but this is something you cannot forget, because at any given time, it could happen again, you know?”

Members of the public were not allowed into the memorial itself until early afternoon Friday, but that didn’t keep the very faithful from showing up downtown.

Conspiracy theorists on street corners urged passersby to look more closely into 9/11 and interested people stopped to write the names of loved ones on a mural Century 21 set up on Church Street, while others merely hustled from subway stops to work. Many stopped to remember the tragedy more than a decade after it shook the country, but many others appeared engrossed in the mundaneness of work on a Friday morning.

While Colon said he believes in remembering in order to prevent a reoccurrence, others simply wanted to remember and honor those lost.

Navy veteran Richard Fill of Easton, Pa., said he travels the 75 miles from his home to ground zero every year to keep from forgetting the event. He’s afraid others have lost interest.

“I never forget, but probably for a lot of people it’s just another day,” Fill said.
“But it’s not another day. To me, it should be considered like a national holiday, where nobody works on Sept. 11.”

Fill, who visits the site every year, worked for U.S. Airways and was on the crew trying to land hundreds of flights on Sept. 11, 2001, said the event really “touched home,” and that is another reason why he makes the yearly pilgrimage to ground zero. He is also proud of his country.

“The country’s a mess, but to me it’s the best country there is,” Fill said. “Every country has its problems, but there’s no other place I’d rather be than the U.S.”

A native New Yorker and Staten Island resident, Wanda Thompson, took a moment Friday to leave a message on the side of a wall that Century 21 had turned into a mural in honor of the day.

“God Bless America,” she wrote, saying she stops by the memorial every year and appreciates the country’s recovery.

“I’m always so encouraged, and it makes me feel so good to come down and see everybody,” Thompson said. “It makes me love being a New Yorker even more.

Thompson acknowledged that the anniversary is a solemn occasion memorializing a tragic event. Nonetheless, she said, she is able to see ways in which America has become stronger because of the Sept. 11 attacks.

“It makes me feel happy that, as sad as it is, it has brought a lot of people together that might not necessarily have come together,” Thompson said. “So I love that as ugly as it may be, but on today — and you know, this whole week and even other times — that we could talk about it and share stories and it’s bringing us together.”

[…] a quick lunch with classmates, I went back to school and wrote my story. It shares the opinions of three annual visitors of the memorial on what 9/11 means and how the […]