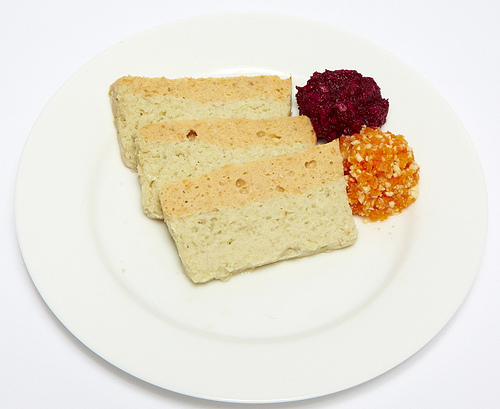 Gefilte fish, the classic though much maligned Ashkenazi Jewish appetizer, has been revived and modernized by The Gefilteria, a Brooklyn-based startup. With Passover coming up this Monday night, The Gefilteria team is racing to keep up with gefilte fish orders. Photo by Circe Hamilton

On Monday night, Jews across the globe will join for a ceremonial meal marking the first night of the Jewish Holiday Passover. There will be wine to celebrate freedom. Maror herbs to symbolize the bitterness of slavery. Matzo to remember how the Israelites fled Egypt. And somewhere along the dining room table will appear the most polarizing dish of them all: gefilte fish.

“I don’t even know where to begin,” Anna Perling, 21, of Park Slope, Brooklyn, said. “Gefilte fish is smelly and it is stored in this aspic-y, gelatinous substance. It was definitely a food of my childhood. Now it kind of grosses me out.”

Gefilte fish, the old-world Ashkenazi Jewish staple made from ground fish such as carp or pike, is a dish that modern Jews tend to associate with a grandmother who made it in their youth—but now stay far away from. The supermarket jarred variety preserved in a fish broth jelly has a lot to do with its notorious reputation.

But like with many ethnic foods that have experienced exciting revivals in the last few years—Greek yoghurt, Asian pork buns, the Mexican Cemita—The Gefilteria, the year-old Brooklyn-based startup, entered the food scene with big visions for Ashkenazic Jewish food too. By producing aesthetically-pleasing gefilte fish terrines using fresh and local ingredients, The Gefilteria transformed the highly maligned fish appetizer into something quite palatable, if not delicious.

“We are having a crazy response from people,” Elizabeth Alpern, 28, of Clinton Hill, Brooklyn, one of the three founders of The Gefilteria, said. “This morning I realized how quickly we are going through our inventory. We are even shipping gefilte fish across the country for Passover.”

A culinary staple with peasant origins, gefilte fish was introduced to America in the early 20th century as a standard food for eastern European immigrants. Today it is the quintessential appetizer at Sabbath and the Jewish holidays.

One year into the business, The Gefilteria is rushing to keep up with gefilte fish demand. In a Kosher for Passover facility in Paterson, N.J., the trio has been busy preparing 100 times as many gefilte fish orders than Passover last year.

But it took a lot of experimenting in the kitchen for The Gefilteria to discover how to reclaim their culinary heritage in today’s hip food scene. The trio realized that for gefilte fish to make a comeback, it would take aesthetics, freshness and the sourcing of the fish.

“Our gefilte fish does not come in a jar,” Alpern said. “We made it look more like a terrine or fish pâté with a line of salmon down the center. It’s such a beautiful and exciting thing to have on the plate.”

With a focus on baking, blast-freezing and sourcing sustainably managed fish such as salmon, Steelhead trout and pike from the Great Lakes, The Gefilteria produces a much fresher and healthier version of gefilte fish, appealing to a bigger more health-savvy market.

“We took out the carp from the traditional recipe because of the high mercury levels,” Alpern said. “We also don’t use any matzo meal or fillers. Ours is gluten-free. So it’s a lot denser, tastier and better for you.”

Altering the recipe has meant some friction with gefilte fish traditionalists, who often compare The Gefilteria’s modernized creation to a grandmother’s old recipe.

“They get thrown off by the different appearance,” Alpern said. “But after they taste it, they usually like it. Many say that it reminds them of their childhood. So that is really special.” 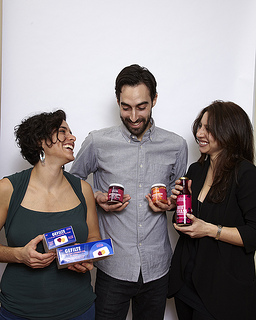 Elizabeth Alpern (left), Jeffrey Yoskowitz (center) and Jacqueline Lilinshtein (right) are the entrepreneurs behind The Gefilteria, a Brooklyn-based food startup. Reclaiming the food of their Ashkenazi Jewish roots, they have revived and modernized the concept of Gefilte fish, the classic though much maligned Jewish appetizer. With Passover coming up this Monday night, The Gefilteria is racing to keep up with gefilte fish orders. Photo by Circe Hamilton.

As well as gefilte fish, which is sold for $16.50 per 12-ounces; or $28.00 per 24-ounces, The Gefilteria also has two kinds of fresh horseradish, sweet beet and spicy citrus carrot, the latter being a modern interpretation of the carrots traditionally served on gefilte fish.

Beyond the Jewish holidays, The Gefilteria has been working to expand its concept to other consumer markets. The team spent all summer at the Brooklyn Flea selling their “Old-World Sampler Plate,” which came with a slice of gefilte fish on melba toast, borscht, sauerkraut and naturally fermented pickles.

“Between the taco guy and the lemonade stand, we actually fit in,” Alpern said. “Now we are seeing a demand for our gefilte fish as an hor d’oeuvre at parties.”

With pickles next on the product line agenda, The Gefilteria also plans to distribute nationally in supermarkets and other stores in the future.

Along with Kutsher’s in Tribecca, the modern Jewish-American bistro that claims it is “making Jewish food sexy,” and Mile End, the recently opened hipster deli, The Gefilteria is part of a growing movement in New York that is reviving and modernizing Jewish food.

“I think we are seeing a rebirth of interest in food,” Alpern said. “Jewish food has always been really great and engaging. But now it’s just on a whole new level because now you’re getting so many more people excited about food.”

Hello,I read your blog named “A hip, new twist on gefilte fish | Pavement Pieces” on a regular basis.Your story-telling style is witty, keep doing what you’re doing! And you can look our website about proxy list.