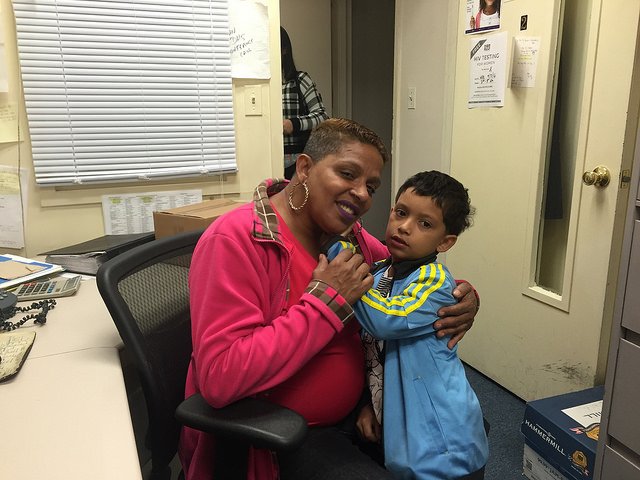 Irene Bonilla, a resident of The Sarah Powell Huntington House poses with her son CJ at the Women’s Prison Association event “Rebuilding Together” yesterday. Photo by Rebeca Corleto.

There are 46 people living at The Sarah Powell Huntington House, on the Lower East Side of Manhattan, a residence for formerly incarcerated women and their children. Some are lifelong drug addicts, some were imprisoned for other crimes. Many have been separated from their children.

The House is owned by the Women’s Prison Association who opened its doors yesterday to over 100 volunteers for “Rebuilding Together” an event held to improve the facility. Volunteers spent the day repainting walls, windows, and staircases and doing repairs in the units.

Irene Bonilla resides in apartment 5D. She moved in after leaving prison and a period of homelessness.

Bonilla’s had a hard week, her sister died two days prior. Despite the grief, Bonilla insisted that she’s going to be okay. She’s worked hard to be sober for 24 months.

“I didn’t go nowhere yesterday,” said Bonilla. “Even though I felt the urge, I stayed home, here.”

Diana McHugh, the director of communications of the WPA said she’s been with the group for over five years, and was one of the organizers of “Rebuilding Together.”

Prior to working for the WPA, McHugh taught a class for women at a correctional facility. In preparing for class one day, she opened the window blinds in the room to let some light in. Less than a minute later, a prison guard came in and shut the blinds, letting her know that it was forbidden to have them open.

“There’s no humanity in prison,” she said. “They’re being denied sunshine.”

That moment in the prison has stuck with McHugh for years and was part of the reason she sought out work at the WPA first as a volunteer and now a full-time employee. For her, Saturday was about letting the women know that they have people on their side. The WPA and all of the volunteers who came to paint the walls and staircases, make repairs and improvements, are there rooting for them.

“We provide a physical space. Someplace safer, more comfortable,” said McHugh. “The most inspiring part of today is to have so many volunteers share their time and let these women know that they matter.”

Statistics show that women in prison receive less visitors from family and friends than male prisoners. As much as 79% of incarcerated women were abused at some point in their lives. More than half of women in prison were the primary caretakers of their children prior to their jail sentences.

Bonilla was happy the volunteers are making her home more cheerful.

“When the walls are dull, it makes you feel depressed,” she said. “I go to my drug program, then come home here. Every day, same routine. The wall outside my apartment is green. That makes me really happy. Green is the color of money. Of life.”

Bonilla has been reunited with one of her 10 children, 6-year-old CJ. The WPA has helped her get her life back after prison. Bonilla compared her life in prison to her life now, grateful for what she has overcome.

“Not having to stand up and be counted,” said Bonilla.. “Not having to share a shower with five other women. Waiting for everything, in line to eat, waiting to go to the bathroom.”

The WPA helps women reunite with their children, find employment, and reestablish themselves after leaving the criminal justice system.

Tiffany Hallett manages the building. She has been at the residence for five years and helped oversee “Rebuilding Together.”

“People that are on the outside, that haven’t been in correctional facilities,think that these people are different. And they’re not. They’re no different,” said Hallett.” “It’s their choices that set them apart. And people may say, ‘Oh, why do they have to drugs because something happened?’ But they may not have had the same circumstances, or made the same choices.”

Bonilla recently received the good news that the New York City Housing Authority has approved her for permanent housing.

“No Regrets,” she said. “Twenty –eight years of crack and I’m proud of me now. I’m happy. Fridays are my best days. I go to parenting [program], come home, pick up CJ and got to my mom’s [house].”