Acting classes help recovering addicts on their road to sobriety 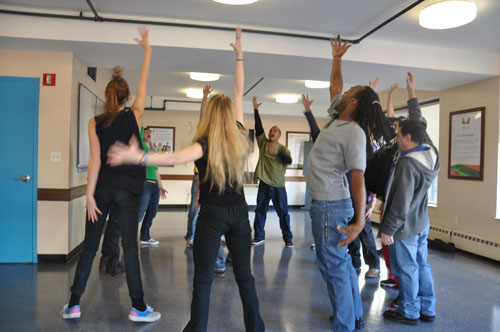 Participants in the acting class at Phoenix House Career Academy partake in a physical warm-up. Photo courtesy of Tommy Demenkoff.

Six months after Robert C. checked himself into rehab, he still couldn’t get his mind off drugs. To get clean and sober, he knew he’d have to find something to enjoy. That’s when Robert discovered acting.

“I was amazed by it,”Robert, 39, said. I fell in love with it immediately. “It’s just something to get away from it, and be who you want to be.”

Robert, who said he lost everything to drugs, is a resident at the Phoenix House Career Academy—an addiction rehabilitation center in DUMBO, Brooklyn. Starting in October, Phoenix House partnered with the Stella Adler Studio of Acting, and began offering its residents a weekly acting class. Now, a month and a half later, there is a wait list to get into the class, which holds up to sixteen participants and the residents say that acting has been immensely helpful in their challenging journeys toward recovery.

Michael M., 55, is not happy to still be in treatment. Every time he comes close to sobriety he relapses, and is forced to stay in treatment for another four months—it’s a frustrating process. He said that acting class is one of the few highlights of being in rehab.

“Personally, I hate it here,” he said. “I hate half the people here. I’m only here because the court put me here. [Acting] takes me outta here. For the two hours that we’re doing this, I’m not in Phoenix House. Since this acting class is here, at least I can escape.”

Starting around the time of the Second World War, when veterans were returning to America with Post Traumatic Stress Disorder, theater became a popular method of rehabilitation, explained Maria Hodermarska, a Drama Therapy professor at New York University.

“The very act of making art, of creating something, is potentially transformative,” Hodermarska said. “Theater is healing.”

According to Amy Singer, director and senior vice president of Phoenix House, that’s one of the reasons that implementing the Stella Adler Studio acting classes seemed like a good idea.

“We know that we have any number of clients who have really struggled before they came to our doors and they don’t necessarily want to be in treatment,” Singer said. “We always try to find ways to make our clients feel engaged, and to give them opportunities to learn, or have some sort of self-discovery experiences. So we try to develop partnerships with community agencies whenever possible, where we bring in art, music, and so forth.”

Hodermarska even suggested that humans were capitalizing on the healing properties of theater even earlier than the twentieth century.

“We go back again to the Greeks,” she said. “Every major city state had its own amphitheater. People would come together and attend the theater as part of a communal healing ritual. So we know from its very origins in western culture that theater has been essentially connected somehow to this idea of healing.”

Tommy Demenkoff, director of outreach at Stella Adler Studio, teaches the classes at Phoenix House on Tuesdays from 1 p.m. to 3 p.m. In class on Nov. 27, Demenkoff spent the first hour leading the twelve participants in physical and vocal warm-ups, as well as some improvisation exercises. For the second hour, he coached the residents on their upcoming production, “The Father Project”—a series of vignettes that will examine Phoenix House residents’ relationships with their fathers.

Demenkoff, though not a therapist, is aware of the therapeutic properties inherent in creating theater.

“I’m not a therapist, I’m not a lawyer, I’m not a doctor,” he said to residents at the end of class Nov. 27. “I’m just an actor. It’s not therapy. But in a lot of ways, you’re all talking about it like it’s some part of your therapy, which is cool.”

For some, Demenkoff’s acting classes are serving as essential training for life after Phoenix House, in the real world.

And for some, acting class could make for real-life career training, too. Some of the residents pointed out that there are a lot of similarities between actors and addicts.

At the end of class, when the participants were asked if they wanted to pursue a career in acting after leaving Phoenix House, at least half of them raised their hands.

“You all can totally pursue the career of being an actor,” Demenkoff said to the class. “It’s within your reach. It totally is. It’s a chosen profession, it’s an acquired taste, and there’s some discomfort and there’s some joy, but it’s like anything in life. You totally could do this.”

But regardless of whether Oscars or Tonys are on the horizon, Demenkoff is certain that the lessons learned in acting class will help the residents lead productive, addiction-free lives in the future.

“What’s really great, beyond that, is [that] everything here is usable stuff,” he said. “You’re experiencing so many different things: people; relationships; language; communication. You’re becoming empowered, and growing, and expanding. It’s all going to apply no matter where you go. I’d feel really cool if you all went out and were actors, but whatever you become, everything here is going to apply to that.”

Giving thanks in class
Residents’ Reactions

Natural acting is mostly accepted by the people. The coach should assist to enhance your skills and connect to the character whose function you are intended to perform. Most of all, you need to be comfortable with the cost with the solutions that are becoming rendered by the coaches.