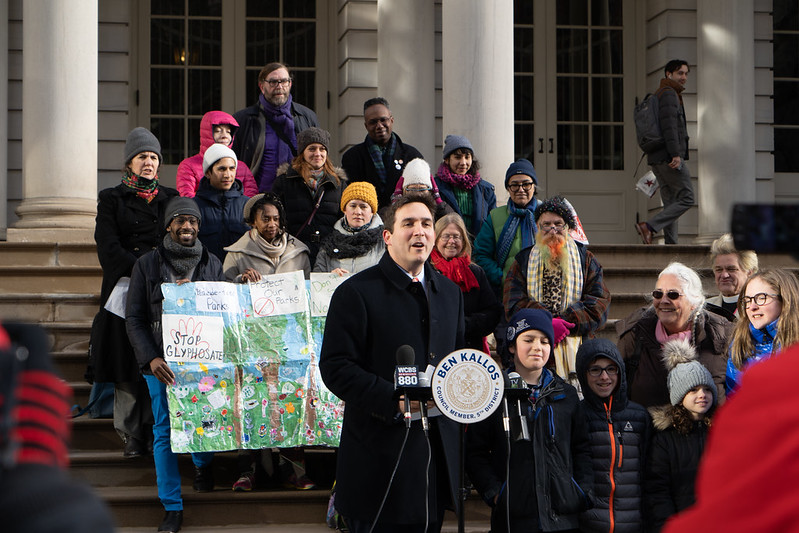 Council Member Ben Kallos of District 5 was first bought to the attention of the overuse of toxic pesticides by kindergarten students from his district. Photo by Bessie Liu.

A walk through city parks can be toxic, literally.

Dozens of activists gathered at City Hall yesterday to support city council members trying to stop poisonous pesticides from sickening New Yorkers. They held signs that read, ‘Don’t Spray, No Way ’ and chanted, “Parks are for playing, not for cancer spraying.”

City Council members Ben Kallos of District 5, who represents the Upper East Side and Carlina Rivera of District 2, which includes the East Village and Gramercy Park, are sponsoring a bill to prevent city agencies from using poisonous pesticides in New York City Parks.

The issue was brought to the attention of Kallos by a kindergarten class who had been researching toxic pesticides in the food served at their school cafeteria.

“I learned something in kindergarten,” he said. “I learned that parks should be for playing, not for pesticides.”

In a report by NYC Agencies, the city’s most heavily used herbicide is glyphosate which is branded and sold as Roundup. Regular exposure to this pesticide poses a significant risk in developing severe kidney damage and increases the likelihood of developing certain types of cancers. Despite a slight decline in the use of the toxin since 2013, in 2018, an estimate of 41% of herbicides used in New York City still contained glyphosate. The toxin is used to kill weeds in the park.

“Our goal is to ban this [glyphosate]. Straight and simple,” Kallos said.

Savitri D is the Director of Reverend Billy and The Church of Stop Shopping, a radical performance group based in New York City. She and many volunteers begun filing freedom of information requests to see where glyphosate was being sprayed around New York City and mapped thousands of glyphosates spraying events within the city.

“Glyphosate is everywhere,” D said. “We know roundup is the cheapest way to kill a weed, and we know there is collateral damage. We also know it is applied more in black and brown neighborhoods and people in those same communities have less access to wellness and medical care.” 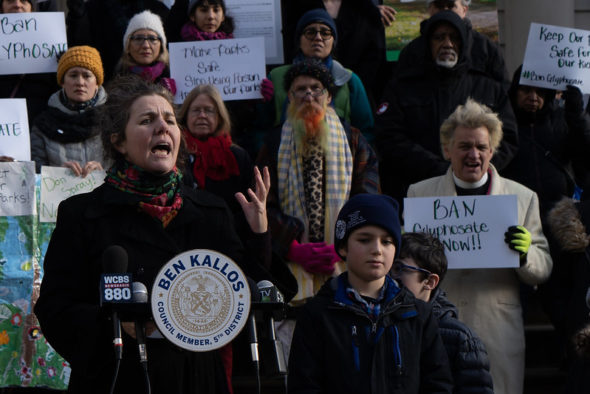 With the help of volunteers, Savitri D, a director at Reverend Billy and the Stop Shopping Choir, mapped out where glyphosates where sprayed around New York City. Photo by Bessie Liu.

According to a report by The Black Institute, a non profit organization that advocates for people of color, estimates that more than 500 gallons of glyphosate was sprayed in the five boroughs of New York City in 2016 and mostly in communities populated by low-income earners and people of color.

“Communities of color and low-income neighborhoods are disproportionately impacted by this chemical, particularly young children who happen to use this park.” said Dan Hogle, a campaign organizer for the Black Institute. “Speaker Corey Johnson needs to call this bill to the floor and ban it once and for all.”

If the bill, which has been pending since April,  is successfully passed, city agencies must move to use biological pesticides, which are known to be less toxic and more effective than synthetic pesticides.

“There are alternatives out there. Smart, better healthier alternatives, and the time is now,” Councilwoman Carlina Rivera said. “We are going to follow in Chicago’s footsteps by embracing alternative, biological pesticides. Those are important alternatives because they derive from naturally occurring substances and are significantly less toxic and break down more quickly in the environment and are often more effective in killing pests.”

With the support of 34 other Council colleagues, Kallos and Rivera have urged Mayor Bill de Blasio to place a suspension on the spraying of toxic pesticides in New York City until alternative procedures can be arranged.