According to The Advocate, the repeal does not solve several problems such as benefits for same-sex partners of gay service members, the insufficiency of existing channels for reporting antigay harassment and a mechanism to allow those removed from the armed forces under DADT to reclassify their discharge.

So far, the Pentagon has yet to release a public statement on the meeting. 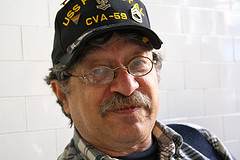 Denny Meyer, AVER’s Public Affairs Officer, said the fact that Pentagon officials were willing to meet is an important step.

The military’s policy will remain in effect until U.S. President Barack Obama, Secretary of Defense Robert Gates and the Joint Chiefs of Staff certify that the armed services are prepared to implement the final repeal, followed in turn by a 60-day waiting period.

The Defense of Marriage Act (DOMA), passed by the U.S. Congress in 1996, continues to be a sticking point for the advocacy groups. Spousal benefits for same-sex couples are not included in the repeal’s language.

“The military really is trying as hard as they can,” Meyer said. “Even though they aren’t being thrown a bone. That’s the big stumbling block. We’re still being held back by these discriminatory laws.”

Officials were also pressed to create a more efficient and less intimidating channel for gay service members to report abuse.