After cuts, rat problems in E. Village could worsen

A sign in the Creative Little Garden on East Sixth Street warns visitors to clean up trash to prevent rat infestations. Photo by Rachel Wise

Faruk Mohammed recalled dozens of mornings when he’d show up to work and find signs of intruders. Packages seemed to be torn open, and their contents covered the floor.

Mohammed, who works at Akter Grocery at 106 Avenue B, set traps, hoping to catch the offender. When he returned to work the next morning, he was shocked to find not just one but five intruders — five fat, gray rats stuck in traps.

“We’re losing business because of rats,” said Mohammed, 32. “We had to move all the shelves around because they bite everything.”

Mohammed is one of many East Village residents affected by rat infestations. And unfortunately for them, things could potentially get worse in the coming months.

On March 30, amNewYork reported the Department of Health and Mental Hygiene plans to reduce the number of pest control aides by almost 70 percent — cutting 57 of 84 full-time positions.

Pest control aides are workers who respond to complaints called into 311 and from community boards about rats; they conduct inspections and work to rid troubled areas of rodent infestations when owners fail to act.

According to officials from DC37, a union for public employees in New York City, four of six workers in Manhattan and one of two supervisors will be cut.

Amy Geung, who lives on E. 10th Street across from Tompkins Square Park, worries about how these cuts will affect the neighborhood. 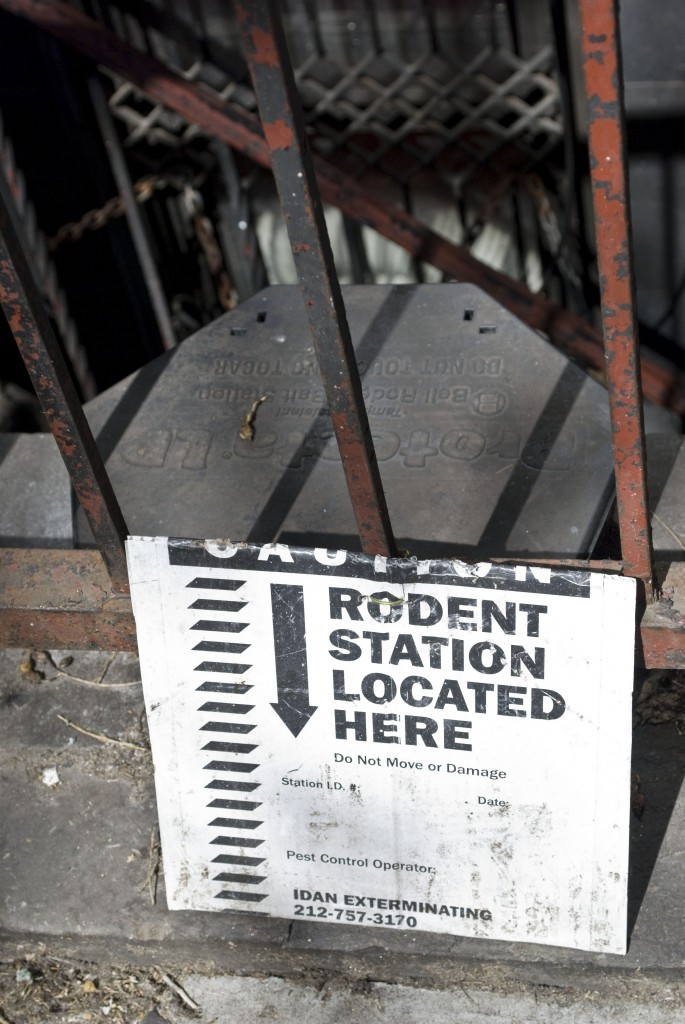 Rat traps, like this one on East Fifth Street, can be seen throughout the East Village, usually near trashcans outside apartment buildings. Photo by Rachel Wise

“I’ve lived here seven years, and each year (the rat problems) have gotten better,” said Geung, 41. “If they cut those positions, what will happen? Probably, it will set us back.”

Geung says her apartment building doesn’t seem to have problems with rats but plenty of other places nearby do.

“You see the rats in some areas a lot — like near trash or dirty vacant lots. In those areas, (you see) one rat trap after another,” she said.

Mohammed said rat traps are necessary in his store because of the amount of trash that accumulates.

“The basement is all garbage. But where I live (on First Avenue), there are no signs of rats,” he said. “I think garbage is the key.”

Michael Rivera, co-owner of Beyond Pest Control at 80 First Avenue, agrees. Rivera said there are some parts of the East Village that are hit hard.

“St. Marks is one place that’s heavily, heavily hit. All the street shops there, and the transit system,” Rivera said. “People are generally not clean, and that attracts rats. There’s no real cure for it.”

The health department couldn’t say how often pest control aides are sent out, and Community Board 3 didn’t respond when asked how often complaints are reported in the East Village. But Rivera said he gets calls daily about rat problems in Manhattan. As for the East Village specifically, Rivera said, “it’s hard to say.”

“I live on the ground floor.  … I’ve been there thirty-five years, and I’ve seen all of five rats. People tell me they see them in the garden, but I’ve never seen them,” said Rose, 59. “It doesn’t seem to be a problem.”

Rose admits he keeps his properties very clean, which might make all the difference. In his apartment building, he keeps trashcans sealed and indoors. In the garden, rat traps are set and trash is kept to a minimum.

In a statement, the health department maintains “proposed cuts focus on the services that would have the least adverse impact.” Officials said the pest-control program will “continue to answer complaints about rats, conduct inspections, exterminate, issue violations for rats and garbage … (and) proceed with the indexing initiative which was recently expanded to Manhattan.”

The indexing program is detailed in the Rat Information Portal, an extension of the NYC.gov Web site, which provides specific data “to proactively identify the presence of rats in neighborhoods, and to compare the severity of infestations among blocks and neighborhoods.” Using the RIP complaint tracker, users can zoom into specific places in the city to determine whether an area shows signs of rats, problem conditions or has passed inspection.

Additionally, the RIP provides a 10-page guide on how to prevent and control rat problems. The health department reminds residents to store garbage in rat-resistant, sealed containers; to trim shrubs and keep landscaped areas free of tall weeds; and to check for and repair cracks or holes in buildings and sidewalks.

The pest-control aide cuts represent just 35 percent of staff cuts the health department plans to make, which could save the city as estimated $1.5 million. Almost every city agency has been asked to reduce spending by at least 15 percent to help New York City close its $2-billion deficit.

While it’s uncertain when these proposed cuts would go into effect, it would likely be at the start of the new fiscal year, which begins July 1.

Visit the Rat Information Portal and see your neighborhood statistics at https://gis.nyc.gov/doh/rip/.