After leaving the order, Catholic “married priests” continue to minister 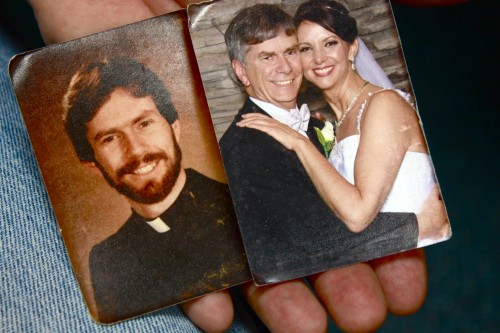 Thomas McCormick holds two photos of himself, one taken during the early years of his priesthood, the other taken more than 20 years later on his wedding day. McCormick is one of 200 priests of Celibacy is the Issue Ministries who continue to minister even after leaving the Roman Catholic Church to marry. Photo by Chelsia Rose Marcius.

Thomas McCormick opened his leather wallet and pulled out an old photo of a young bearded man in priestly garb. He paused, looking down at the picture before reopening the wallet to jimmy out a second portrait of the same size and of the same smiling face. But the man’s cheeks were now bare, his brown hair faded. A black tux and white bow tie replaced the religious vestments, and now the man was wrapped in the arms of a woman.

The photographs of McCormick —the first taken in 1981 when he entered the Roman Catholic priesthood, the second snapped on his wedding day more than two decades later —are daily reminders of his commitment to both marriage and ministry. Yet McCormick, 60, of St. James, N.Y., and other Catholic “married priests” are considered both outsiders and at odds with the church.

More than 200 ordained married men in “Celibacy is the Issue” or CITI Ministries preform religious rites for disfranchised Catholics who want the blessing of a priest.

A shortage of new priests has left older clergymen without successors and parishioners without guides to keep them within the Catholic community. According to the Center for Applied Research in the Apostolate at Georgetown University, 288 parishes in New York and hundreds more nationwide closed between 2000 and 2010. The Pew Research Center study Faith in Flux, updated in February 2011, found that one in 10 Americans raised Catholic have now left the church as adults, and nearly one in four cite “the rule that priests cannot marry” as a reason for leaving.

“Parishes are closing all over and a lot of that is due to the decline in the number of priests,” said Thomas Reese, a Roman Catholic priest and Research Fellow at Georgetown University’s Woodstock Theological Center. “With fewer priests in the parish, many Catholics say, ‘Why don’t you do something about this, why don’t you ordain some married men so we can have mass, so that we don’t have to drive 100 miles to the next church.”

Thomas McCormick on entering the priesthood and his decision to leave

McCormick said his decision to enter the priesthood shocked old classmates. As a kid in Brooklyn, he did “the Catholic thing,” attending mass every Sunday and serving as an altar boy at the local parish. But teenage friends knew him as the guy who sported a leather coat and drank beer on the Brooklyn Belt Parkway – and the seminary was the last place anyone expected McCormick to wind up after a four-year stint with the U.S. Air Force.

“The only reason I went to church while in the military was because I was afraid God was going to strike me dead,” he said. “And then I was invited to go to a little prayer meeting in 1972 in a little town outside of Oxford, England. It was during that weekend that I saw for the first time Catholics who were deeply in love with the lord. But not because of the rules and regulations of the church. They had a personal relationship with God. I wanted that.”

He entered the Seminary of the Immaculate Conception in Huntington, N.Y. at age 27, and was ordained within three years. But McCormick said he did not quite fit in. He wore sandals and kept a beard. He stood on the pews to preach. And he often challenged church leaders.

“They saw me as radical, they saw me as different,” he said. “But I would not be afraid to speak off the altar on ethical and moral issues.”

More than 20 years passed before McCormick left the priesthood; he said it was, for the most part, because of loneliness. But afterward McCormick felt something was missing, and spent the next seven months questioning his decision.

Louise Hagget, founder of CITI Ministries and its website Rent-A-Priest, said there are church laws that validate the ministry of a married priest – an interpretation of Roman Catholic doctrine not recognized by the Vatican.

Still, the group’s online directory – dubbed “God’s Yellow Pages” – lists 200 ordained married men in 42 U.S. states. Hagget said members rarely get together, but she called for a meeting in 2002 to discuss clerical celibacy and the state of the church. McCormick, who left the clergy that year, decided to attend.

“I remember standing up and saying, ‘Hi, I’m Tom, I’m on leave and I’m lost,” McCormick said. One priest approached him after the meeting. “‘I remember him coming up to me and saying I know your pain,’ He looked into my soul and said, “Remember, you are a priest forever. Nobody can take that away from you.’”

The expression, “Once a priest, always a priest” is common among CITI members, including Richard Hasselbach, who left the priesthood in 1990. 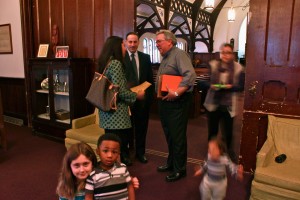 Richard Hasselbach talks with parishioners at the Clarkstown Reformed Church in West Nyack, N.Y. Hasselbach left the Roman Catholic priesthood to marry yet still continues to preside over weddings for Catholic couples.

“I don’t think the Pope would be too thrilled with me if he were to join the conversation,” said Hasselbach, 60, of Carmel, N.Y. “But the word ‘catholic’ means universal, and I believe that my baptism and my ordination is a universally Christian one. So I feel like I have the key to every church door. And I should be able to walk into any church in Christianity because I am a universal Christian.”

Yet this understanding may be lost on recently ordained Catholic clerics. Reese said younger priests appear to adopt a more traditional approach to ministry and “are not agitating to change the rule” on clerical celibacy.

“These guys who have entered the priesthood in the last 20 years tend to be more conservative and, more importantly, much fewer in numbers then the classes the 50s and 60s,” he said. “They’re not going to be able to replace the current crop of priests facing retirement, illness and death.”

According to Hagget, more than 75 percent of the married priests in CITI Ministries were ordained between 1950 and 1979, when Catholic reform groups began popping up across the country.

Many groups have since dissolved. Stuart O’Brien, 74, of Boston, a married priest and a part of the reform group Corpus, said members continue to meet with church leaders on the issue of celibacy.

He said most of their efforts “fall on the deaf ears of Rome.”

“There are no young priests, no middle-aged priests, just old priests,” O’Brien said. “You cannot make these people come alive with a 75-year-old priest. The church talks about getting young people to come back, but come back to what? What do they have come back to?”

McCormick oversees about 100 Catholic weddings a year, and he said marriage has allowed him to connect with parishioners in a way traditional priesthood could not.

“If the church were to change the rule on celibacy, I would go back tomorrow—and so would most of the priests I know,” he said. “There’s a fear that it would restructure the entire world understanding of Catholicism. But I know more now from being married, and my preaching would be more effective because of the life experience I have.”

I knew Tommy McCormick in the Air Force and after his joining the priesthood. I lost track of him after he left the priesthood and his former church under diocesan rules would not tell me anything. So glad to see this article and to know that he is still alive, well and HAPPY!

Father Tom so sorry that you left St. Sylvester’s Church many years ago. I attended Mass a few Sunday’s after you left but it just wasn’t the same. yes, those sandals lol I picture you still wearing them till today. I hope the church changes their stance on celibacy. God Bless You Always

I also knew Tom during his Air Force days. In fact, I was in love with him during the time we spent together. We saw Brother Sun, Sister Moon together. We went to bathe in the waters of Our Lady of Lourdes in France together. I was one of the people that he hung out with at the prayers meetings in 1972, which are mentioned in the article. How heart-inspiring it is to read of his life’s journey after so many years have passed . . .

Fr Tom was one of the most spiritual yet human priest when I was a a member at St . Sylvester in Medford . I developed a closer relationship w Jesus through his sermons which were not the stuffy traditional kind! My son was an alter boy then my daughter received her holy communion, & my home was blessed by Fr Tom ! He treated his parish as a close community which is rare today . After losing my husband of 44 yrs two yrs ago I have the strength to go on but would like to see a widow & widowers program that is uplifting & not a downer with everyone crying maybe he would consider?

I went to Fr McCormick Charismatic Prayer meetings in 1987 St Sylvesters. He was awesome .
I really miss them good old days!
God Bless you Fr.Tom.

I knew Fr. Tom way back when. He had beautiful and awesome gifts of the Holy Spirit. He was at the beginning of the Charismatic movement in the church many people were SLAIN IN THE SPIRIT at his masses. .. The charismatic movement in the church introduced the many gift of the Holy Spirit in a way that was alive and spiritual instead of just book knowledge. We need more of that in the Catholic church today Where is Fr. Tom NOW