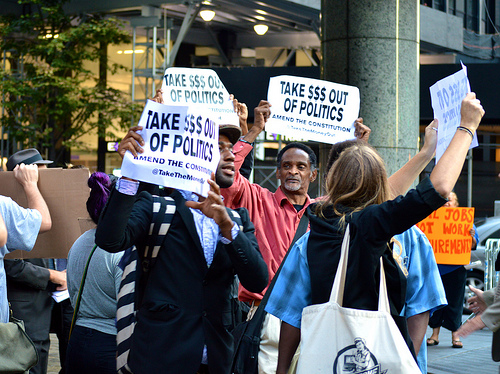 Demonstrators gathered outside a Republican fundraising event at the Hilton Hotel in midtown. Photo by Mary Zarikos

There was that familiar scent of Occupy Wall Street this morning outside the midtown Hilton Hotel, where a Republican fundraiser was being held in the early hours of the morning. About 20 low-wage workers, including former and current employees of Bain-owned companies, and a 15-foot puppet, the “Bain Job Destroyer,” gathered to protest the potential reality of a Romney-run economy.

One of the protestors, Shantees Jones, 29, of the Bronx, was recently laid off from a low-wage job at Burlington Coat Factory, a company owned by Bain Capital.

“I was making eight dollars an hour with no health insurance and no way to feed my three children,” Jones said as she protested in front of the hotel at 53rd street and 6th Avenue. “I don’t want Romney to become president, because I’m scared he is going to run America the way he runs his businesses. We are the 99%. We can’t live like that.”

The protestors had a clear vision on what they wanted America to be and they spent about an hour delivering their message to passersby who didn’t linger: a society where everyone, not just a privileged minority, can establish a secure and decent life. They demanded a system that ensures corporations pay their fair share in taxes and protects social service programs, and a leader who can improve the standard of living for the American working class.

Bobby Tolbert, 59, an activist from Vocal New York, a grassroots organization whose mission is to empower people living with HIV/AIDS, the poor, and the recently incarcerated, said that presidential candidates should be chosen on their merits and not on how much money they can raise when campaigning.

“Our democracy is being bought by the richest Americans and meanwhile our communities are being marginalized and disenfranchised,” said Tolbert. “We cannot stand to this kind of government in America.”

The issue of money was central to the morning’s protest, particularly with regard to the billions being spent this current presidential election—the most expensive in history. Protestors felt that the upcoming election was more like an auction, going to the highest bidder, and that there was no real regard for the voters themselves.

Jennifer Flynn, an activist at Take the Money Out, said it was a shame that politicians had to be at these fundraisers, instead of talking to the voters about real issues.

“I hope what happens is that in the future, we can actually elect our elected officials,” said Flynn. “It’s impossible for poor working class people to have their voices heard in this upcoming election.”

Though the protestors were down on Romney, they were also not happy with the money being spent on the Obama reelection campaign. They said a recent Obama campaign dinner hosted by Jay-Z, sold tickets at $40,000 a piece. 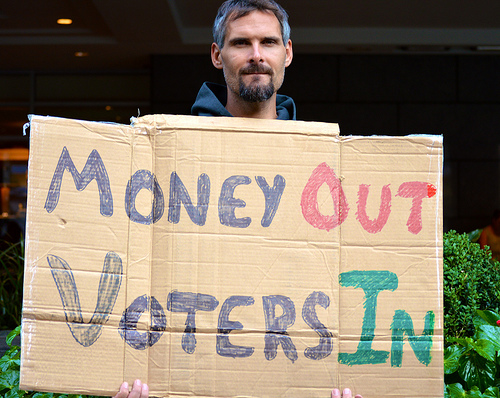 Jeffrey Brewer 34, protested outside a Republican fundraiser. "Money Out, Voters In." Photo by Mary Zarikos

“This is a very diverse coalition,” said Jeffrey Brewer, 34, an Occupy Wall Street activist from Georgia. “Some of us will vote Romney, others will vote Obama. Really, we are not here about the candidate. We are here to protest the selling of our democracy to the highest bidder.”