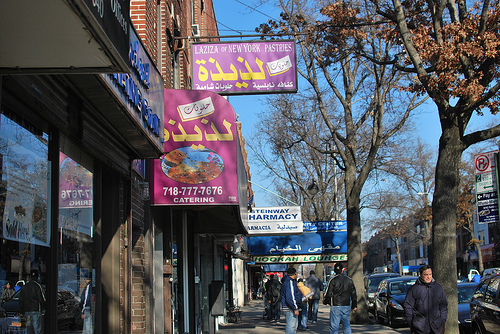 Smoke whirled up from a corner cart, as fresh halal meat was pressed down against hot grates, melding with the sweet aroma of fruit tobacco coming out the open-air hookah bars lining Steinway Street near Astoria Boulevard in Astoria, Queens. Arabic covered business awnings and windows of the ethnic clothing shops, mosque and eateries. This neighborhood is casually known as Little Egypt. Locals know this is where to find the best Middle Eastern food in town.

But these are the same restaurants, cafes, hookah bars and shops the police sought out clues after the 9/11 attacks and continue to be monitored by the NYPD in search of terrorists, according to residents and an investigative report by the Associated Press. They say plainclothes police officers listen to their conversations in cafes, look over community center message boards, and take photos of these businesses.

In multiple press accounts Police Commissioner Ray Kelly has denied allegations of the alleged spy unit, but Muslim advocacy leaders have had enough and are now taking a stand against racial and religious profiling.

Police would not return requests for comment on this story.

For Sarsour, the targeting of ethnic neighborhoods is a very real intrusion into the lives of Muslim Americans. She said Muslim residents are too paranoid to come out of their homes on a regular basis and take advantage of the social services the AAANY provides.

“People don’t feel free to talk about things anymore,” Sarsour said about Arab Americans, who she said are generally very politically opinionated but now hold back for fear of being thought a terrorist. “People don’t want to share their views. It is creating strife between groups.”

But Fadi Darwich, 26, from Jersey City, N.J., whose family operates a new Lebanese eatery in Astoria, does not feel intimidated by extra surveillance on the Muslim community.

“I don’t think it will affect the business,” Darwich said, of his customers that about half come from the local Muslim community and those who just come solely for the food. “They are targeting the area because there are Muslims. There should be privacy. But I am with the police if they can find something wrong.”

Jessica Zoppolo, 23, an Astoria resident who frequents this area to dine believes that nationality-specific investigations can be harmful to the neighborhood.

“It’s wrong to assume all the businesses on Steinway Street have some relation to terrorism,” she said. “It’s unfortunate when these investigations cause businesses to shut down… for fear of being blamed for something they are not a part of.”

A rally in Foley Square was the first grassroots action of this movement moving forward.

“There was a lot of fear, a lot of controversy,” Sarsour said. “People knew their pictures were going to be taken, they were doing to be in the media, potentially, NYPD looks at those videos and who they are already following.”

This is a step that Muslim New Yorkers must take in their fight to stop racial and religiously profiling, Sarsour said.

Leaders of this movement are currently looking at its legal options as well as initiating education workshops at college campuses, organizing future community action and getting people to talk about these issues through social media.

“One of the things that was missing in the past was we weren’t really, our entire community wasn’t necessarily involved,” Sarsour said. “We want people on social media to talk about it. In hopes, there will be online and petitions circulating.”

The next step for the coalition is to ask the NYPD to set up an oversight commission—an organization completely independent from the police department that can provide objective insight to what is going on and to prevent further damage.

The coalition against the racial and religious targeting of Muslims also wants to amend the training of police officers and the removal of anti-Islamic materials and “entire curriculums based on hate [conveying] Islam as a religion based on violence,” said Sarsour.