At Ground Zero, Truther preaches to anyone willing to listen 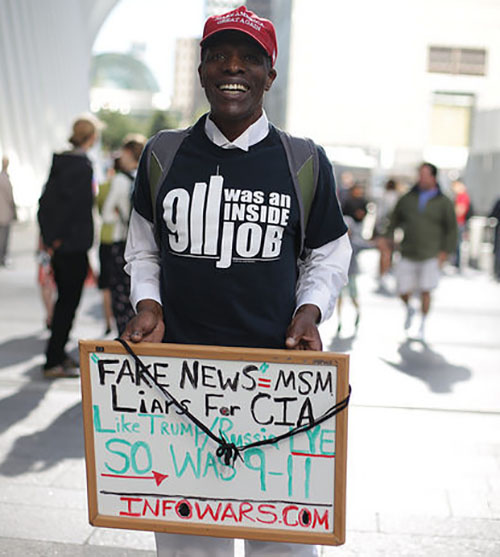 Kenneth Lane, 55, “a truth seeker” held up his board for everyone at Ground Zero to see. Photo by Polina Meshkova

In the midst of crowds gathered at Ground Zero to pay their respects to the victims of 9/11, the news outlets trying to get a good coverage, and tourists wandering around with cameras, Kenneth Lane, an African American Trump supporter, stood in a “9/11 Was An Inside Job” T-shirt.

Lane, 55, from Amityville, New York, who called himself “a truth seeker and an America first type of person,” is sure that 9/11 was nothing more than a false attack to evoke fear in the general population. Lane is not the type of person to keep quiet. He has about 3,000 followers on his Twitter account and shares his opinions with anyone willing to listen.

And there are quite a few at today’s 9/11 anniversary. Lane stood next to two other Trump supporters who held American flags and wore patriotic badges all over their jackets, which definitely attracted attention.

When the attacks took place, Lane said, he was a waiter at Red Lobster in Long Island, New York.

“I always remember this day,” he said. “Everyone was looking up at the TV, and then, when I saw a plane actually go into the World Trade Center, that’s when it struck. I said, “Wait, this is something big happening!”

Lane said that seeing the buildings implode led him to think that those buildings were brought down on purpose.

In Lane’s opinion, the entire event was orchestrated in order to use fear as a mechanism to pressure people into allowing the government to take more control over their lives. He believes that all the wars that followed were preplanned long before 9/11 took place.

“They want to keep us in these wars because we always need a boogeyman and it’s all about control,” he said.

Although Peter Santoro of the Upper East Side of Manhattan listened to Lane, he didn’t agree.

“At first blush, I was angry at him for having such a loud voice in this somber moment,” Santoro said. “But the truth is, this is what freedom is all about. There are countries where, if a person like this was adamantly opposed to the general opinion and what the government and people feel, he would be shunned away and jailed immediately. Yet in this country, we’re able to have someone like that come to a somber ceremony like this, perhaps in some ways maybe even be a bit disruptive, but still have his voice heard.”

Santoro said that 9/11 is personal to every American, whether affected by the tragedy directly or not, especially to those who were in the city during those devastating events.

“If you lived in the city and remember the smell of death, you can never forget that,” he said. “There could be nothing more personal than that.”