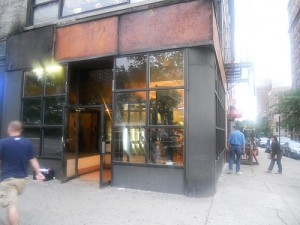 H&H Bagels on the corner of W. 80th St. and Broadway has since moved out of its Upper West Side location. Photo by Elizabeth Vulaj.

After the recent closing of the popular H&H Bagels on W. 80th St. and Broadway, area residents now worry about the commercialization of the Upper West Side.

Marc Fintz, the business manager for H&H, attended a community meeting last month to discuss the store closing. James Besser, who led the meeting, said that it was the first gathering of the newly created Upper West Side Preservation Committee.

“Neighbors say hello to each other, we’re like a small town,” said Besser, the committee president who lobbied to keep the H&H open prior to its closure. “We want to keep it that way.”

After the store’s landlord, Friedland Properties, raised the monthly rent to $67,000, Fintz said H&H could not make the new payments without also raising it prices. He added that Friedland Properties is now trying to replace the old corner store with a bank – something that residents say takes away from the neighborhood charm.

“It takes away small businesses and makes everything appear cold and corporate,” said Martin Samama, who has been living on the Upper West Side for three years.

Residents like Samama say this closing could mean the neighborhood will eventually lose its cozy appeal and bring in more chain stores.

While the closure comes as a shock to some residents, Upper West Side H&H—which first opened in 1972—has experienced financial woes since last year when the shop’s president and founder Helmer Toro pleaded guilty to grand larceny after cheating on his taxes. According to reports, he stole more than $500,000 in employee taxes.

Still, the change does not sit well with those who frequented the eatery.

Polly Carter, who used to live on the Upper West Side, said each time she visits the area, she sees that another chain store has replaced a well-liked neighborhood joint.

“So many things change here,” she said, leaning back on a bench in Riverside Park, surveying the block. “Every time I come, there is something different. But I am glad to see places like Hot & Crusty and Filene’s. I’m glad to see those things haven’t moved.”

Other neighbors feel the same way.

“I don’t want the Upper West Side to be corporate,” said Laurie Graff, who has lived in the neighborhood for 19 years. “We are losing the individuation, the charm. I’m not excited to be able to go to the same five stores across the country.”

Fintz said he believes they will open up another H&H on the Upper West Side. But before the W. 80th St. location officially closed on June 22, Fintz said both employees and customers were reveling in the nostalgia, remembering how long the store has been in business.

“If you saw these employees working, they feel they are a part of something much bigger,” Fintz said. “People will come in and say, ‘My children are in their 40’s and they were teething on H&H bagels when they were small.’”

We are sad to see H&H leave the Upper West Side . It would be nice to see another small business go into the vacant commercial space. The UWS is a great neighborhood and many locals would agree that preserving it’s appeal is important.