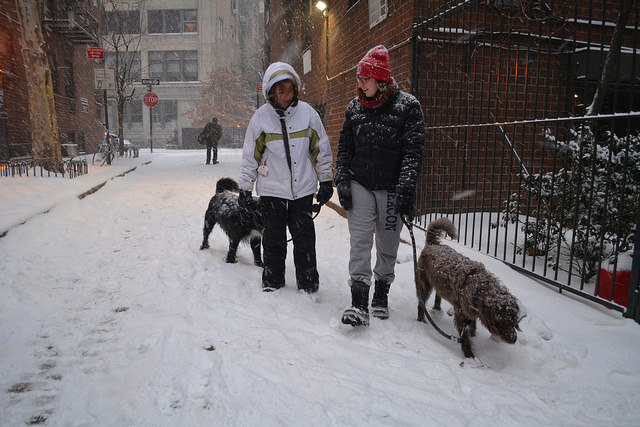 Riley Samson, 18, and Annabel Newman, 18, of the West Village walked their dogs around the unusually deserted West Village this evening. Photo by Virginia Gunawan

Despite whipping winds and heavy snow, dogs need to poop and pee. So as Manhattan’s West Village streets started turning white this evening, dogs and their owners were taking care of business.

“It’s not like I really want to take them out, it’s because I have to,” said Riley Samson, 18, of the West Village. “My dog needs to pee and poo and do other stuffs outside, so I’m taking her out.”

Samson was out with her brown female Labradoodle, Wizhtle. Walking along them was Samson’s childhood friend, Annabel Newman, with her neighbor’s dog, Zack.

“The case is a little different for me, I got paid for walking Zack,” said Newman, 18, also of the West Village. For her service, she got $25 for one hour walk.

While Zack was curiously and carefully observing the snow, Wizhtle was exuberant. She wanted to explore every nook and crannie of the street and was vigorously sniffing around.

“It gets difficult sometimes to hold her because she’s got too excited with the snow,” said Samson. “I have to grip the leash tightly and be really careful with my steps too.”

Unlike other fashionable dogs in New York, Zack and Wizhtle did not wear sweater or dog boots.

“She’s a big dog and she wouldn’t let me put a sweater on her,” said Samson. “After all, she doesn’t need one.”

“The only thing that concerns us is the salt they use on the snow,” said Newman. “Zack’s owner has been telling everyone around the neighbor to use blue salt.”

Salt used as ice melt can damage dogs’ paws, leading to infection. Even worse, if dogs lick their paws and ingest the chemically unhealthy substance, it could be poisonous for them.

The two childhood friends walked around the neighborhood for almost one hour, before calling it a day as the sun set.

“I’m actually preparing for it to be colder,” said Newman.

She wore her ski jacket, snow pants and snow boots.

“I feel like everyone is freaking out for no reason,” said Newman.

Her mother had stocked up food and had thought of filling the tub in case they run out of water.

“But then, maybe we are underreacting to it,” Samson reminded Newman that today is going to be the first time subways were shut down because of snow.